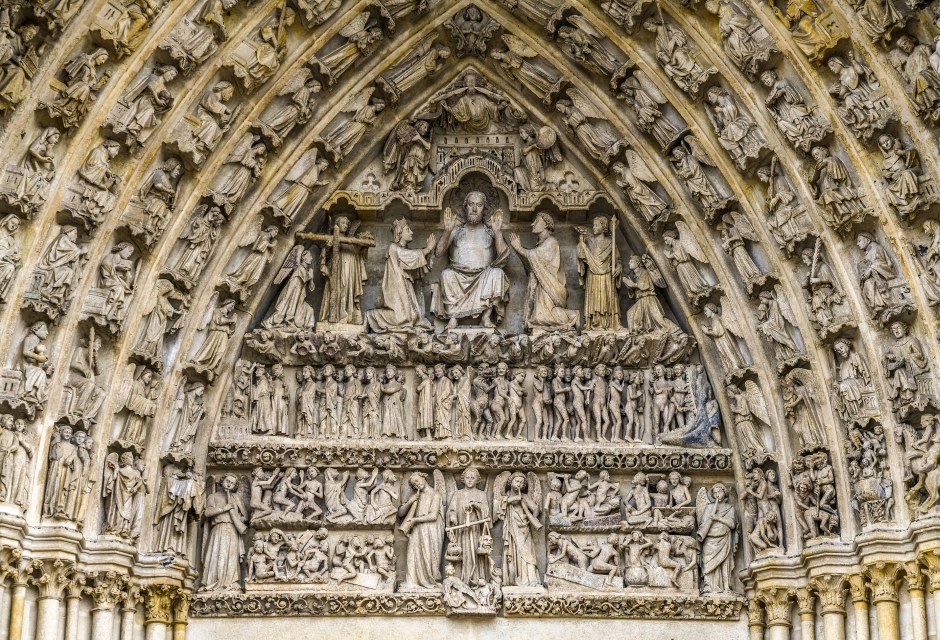 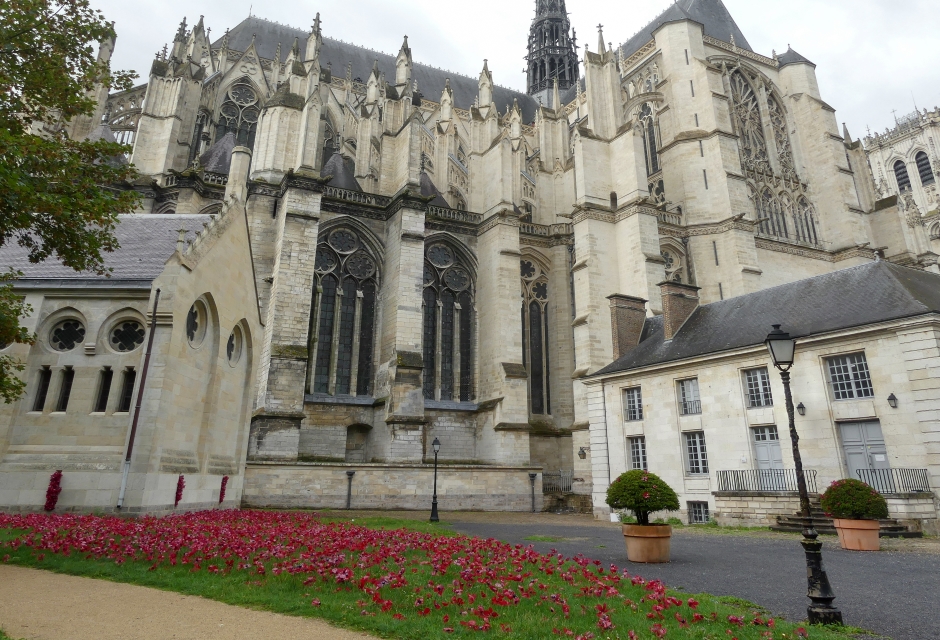 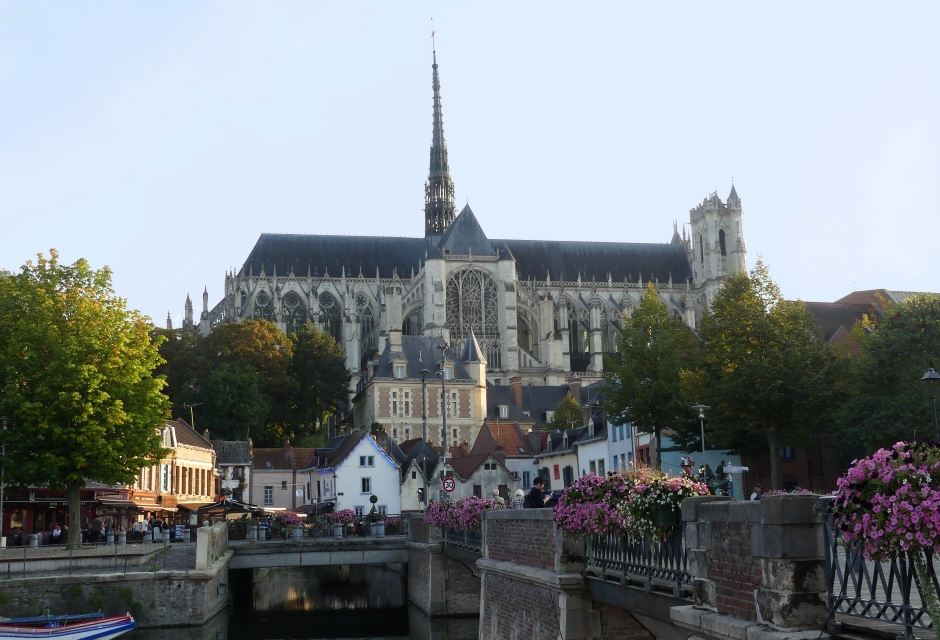 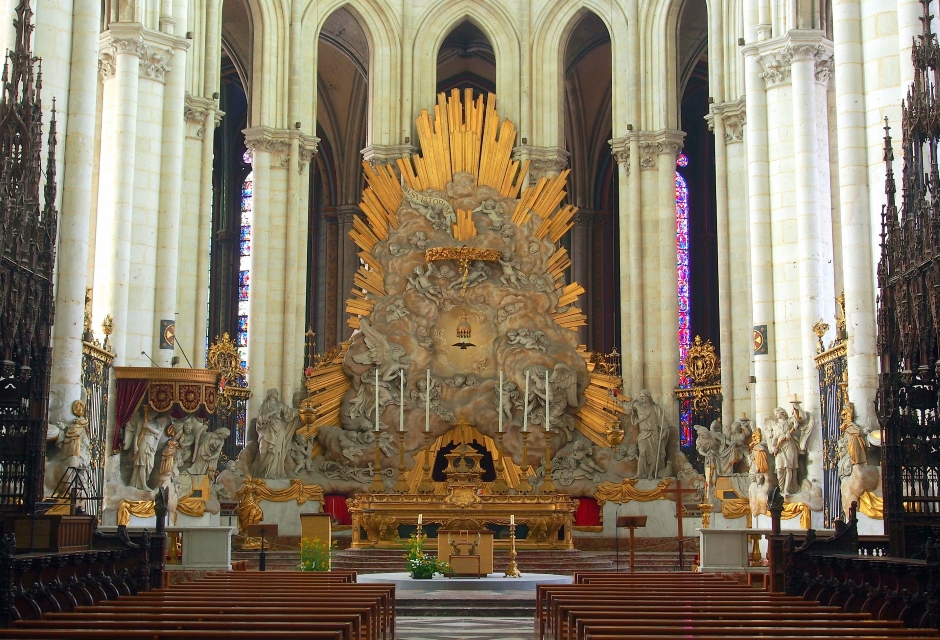 Designated a UNESCO World Heritage Site in 1981, Amiens Cathedral – along with Chartres and Reims – is one of three 13th Century High Gothic churches in France. The largest cathedral in the country, Amiens was built to house the head of St. John the Baptist, retrieved from Constantinople during the Crusades. It is St. John’s head and the attention it attracted that provided most of the funds to build Amiens, also the tallest cathedral in France. Today, visitors head to Amiens to admire the pristine architecture and amazing artworks, and to get a good look at the city of Amiens from the cathedral’s west towers.

Visitors to Amiens Cathedral will note that its design is not unlike that of the other notable French cathedrals of the same era. It boasts a west façade with two towers, a nave with three aisles, a three-aisled transept (giving the cathedral its cruciform shape), a five-aisled choir, an ambulatory around the apse, and a host of radiating chapels around the ambulatory. The lower tier of the west façade includes three deep porches over which sits a gallery of life-sized kings – 22 in all – as well as a magnificent rose window. The western portals include statues of well-known local saints as well as eschatological scenes that depict the ultimate destiny of humanity.

When the cathedral’s exterior was laser cleaned around the turn of the millennium, it was discovered that it was most likely painted a variety of colors when it was first constructed in the 13th century. Though those colors couldn’t be restored, Electricity of France devised a way to project the colors onto the façade, duplicating the original polychromatic color scheme. During the summer and certain holidays, a special light show, accompanied by string music, is presented each evening.

On the inside of Amiens Cathedral, polychromatic sculpture decorates the choir and other artwork adorns the chapels and other sections of the sanctuary. As a matter of fact, the choir area contains more than 3,500 figures. The Flamboyant Gothic-style choir screen is also of note. The pulpit is also a work of art in and of itself, made of wood and marble and depicting the Three Theological Virtues – Faith, Hope, and Charity.

An ornate reliquary marks the place where the head of John the Baptist is kept and the floor that leads visitors to all the sites is a classic black and white geometric pattern. A similar floor appears in the labyrinth, which was originally designed by Renaud de Cormont and installed in 1288. The current labyrinth, however, is a reproduction from the 19th century. Visitors should also take time to browse the half-dozen or so radiating chapels at the front of the cathedral, all of which are extremely ornate and a joy to view.

Amiens Cathedral, commonly known as the Cathedral of Our Lady of Amiens, has a history dating back to the 13th century. The cathedral’s construction began in 1220 and was completed in 1288. It is regarded as one of France’s greatest examples of Gothic architecture. The cathedral was built on the place of an older church that had existed since the fourth century.

During the French Revolution, the cathedral was used as a temple of reason and later as a barn. In the 19th century, the cathedral underwent a major restoration.

The Amiens Cathedral is easily accessible through any mode of transportation.

By Train: The easiest way to get to Amiens is by train. The Amiens train station is well connected to other major cities in France such as Paris, Lille, and Calais. From the train station, it is a short walk to the cathedral.

By Car: If you are driving to Amiens, there are several parking options available near the cathedral. The Saint-Leu district’s parking lot is the closest to the cathedral.

By Bus: Another option is to take the bus, Amiens has a good bus network, and you can check the bus routes and schedules on the official website of the public transport of Amiens.

Once you arrive in Amiens, the cathedral is located in the city center and is easily accessible on foot. It is a short walk from the train station and other popular tourist attractions in the city such as the Hortillonnages floating gardens and the Jules Verne Museum.

It is open all year round, but hours of operation may vary depending on the season. It is recommended to check the official website of the Amiens Cathedral for the most up-to-date information on hours of operation and admission fees.

To avoid long lines and crowds, it is best to visit the cathedral during off-peak hours.