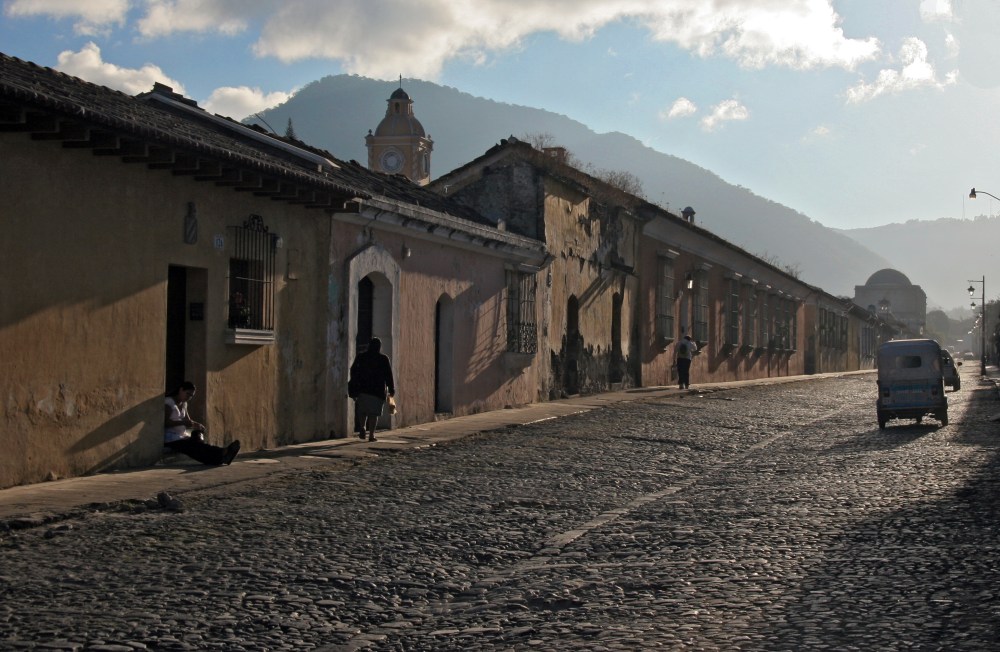 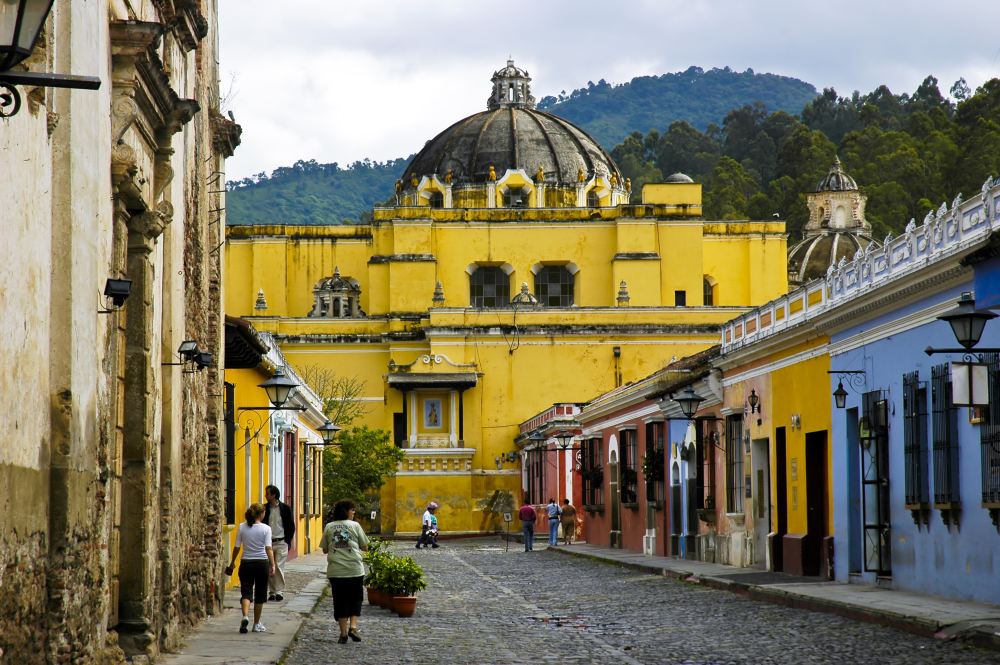 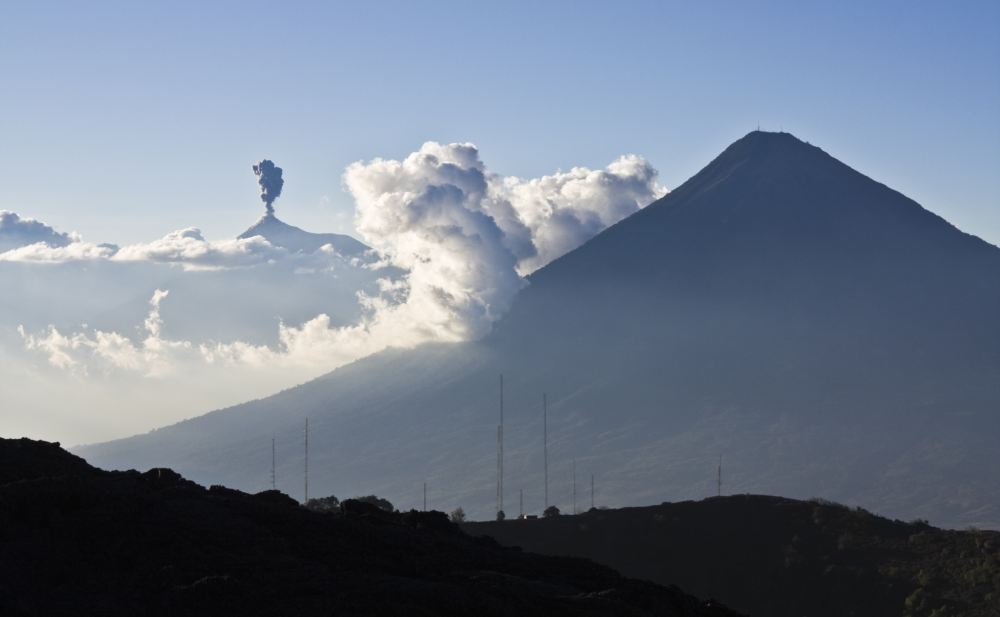 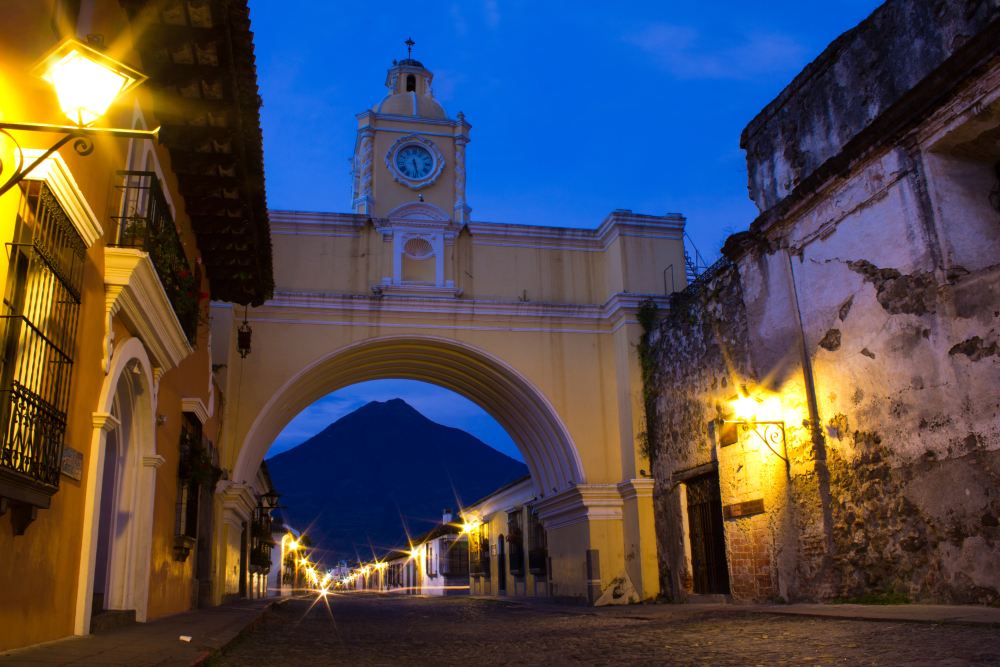 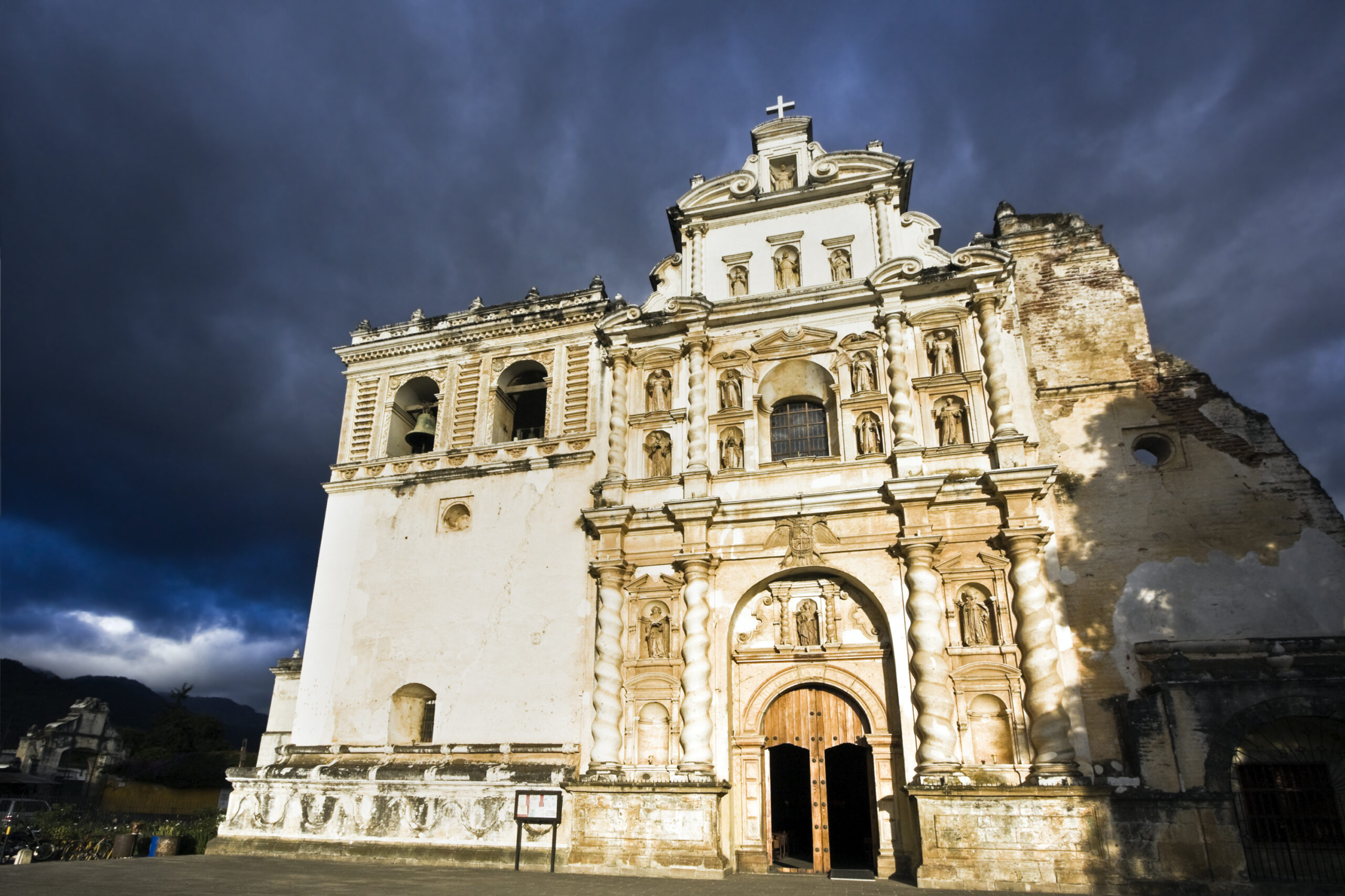 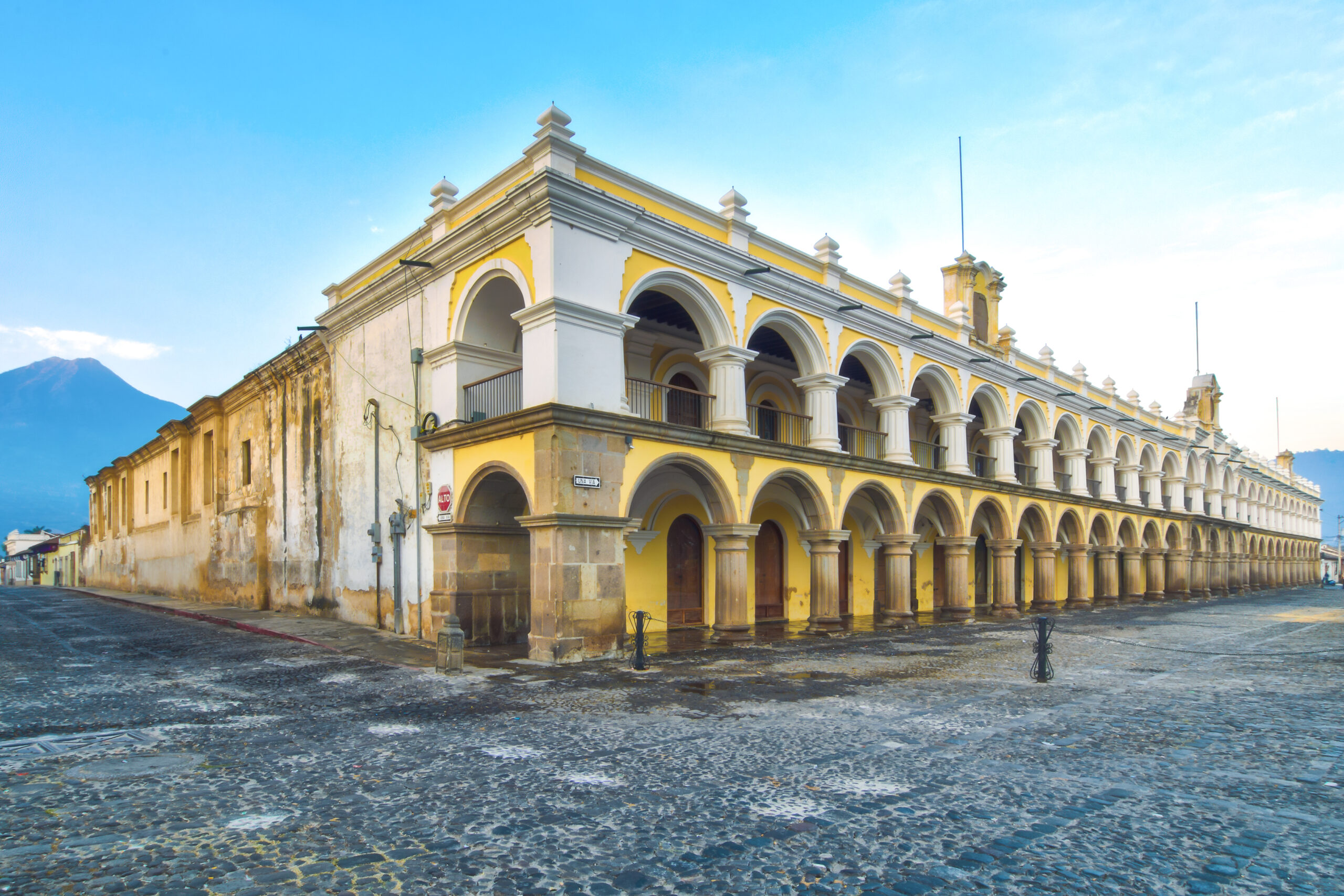 The Kingdom of Guatemala  started in Chiapas and stretched to Costa Rica, and Antigua was once its capital.  The city was founded in 1543 after a flood in 1541 devastated nearby Ciudad Vieja. Like Lima and Mexico City, Antigua served as a judicial and administrative center for the Spanish and over time grew to be a religious and cultural center as well.

Antigua Guatemala is just a 30 minute drive by car from Guatemala City. Set in a valley of coffee farms and watched over by three majestic volcanoes,  it is one of Guatemala’s most popular destinations. You will find centuries-old colonial architecture covered by beautiful exotic flowers, breathtaking religious processions, excellent Spanish schools, restaurants and hotels.

Once one of the most important Spanish settlements in the Americas, Antigua Guatemala boasts graceful colonial architectural against a spectacular backdrop of emerald volcanoes and azure skies. Antigua Guatemala underwent a process of slow restoration when coffee plantations brought prosperity to the area in the 19th century. It has since been declared World Patrimony by UNESCO due to its unique architectural and historical importance. Today Antigua Guatemala is a charming town with excellent hotels and restaurants, world renowned Spanish schools, upscale shops  and traditions all its own.

Central Park is the center and heart of Antigua. The park has a beautiful fountain and acts as the meeting place for locals and tourists alike. Antigua is well known for its centuries-old colonial ruins, the remains of monasteries, convents and churches,  destroyed by earthquakes that created havoc for the Spanish colony. Central Park, with a mermaid fountain in its center, is bounded by the Palacio de los Capitanes, built in 1549 and reconstructed in 1735, the Municipal building, which dates to 1743, and the Cathedral, constructed from 1543 to 1680.

Some of Antigua’s ruins include Capuchinas, where short and stocky columns were experimented with by architects to weather an earthquake; the Merced with intricate stucco decoration; the remains of a Franciscan monastery; and the convent of Santa Clara. Draped with bougainvillea and with awe inspiring  views of majestic volcanoes, the ruins give inspiration to both artists and tourists.

The Santa Catalina Arch is one of Antigua’s most recognizable landmarks and stretches over a street and is the backdrop of many photos of the city. The arch was a walkway for nuns at the Santa Catalina convent to cross the street and not have to leave the convent.

Antigua is known throughout the world for its celebration of Lent known as Cuaresma. They celebrate with huge processions where sometimes over one hundred men carry an anda. Andas are large wooden platforms that have the depiction of Christ or Mary. The precessions leave the different churches morning and night during the 40 days of lent and pass through all the streets of the city. Locals lay out hand made intricately designed carpets of colored sawdust and flowers for the procession to walk over. Holy week or Semana Santa ends the religious festival and attracts over 250,000 each year.

Many people come to Antigua to learn Spanish. There are over 30 Spanish schools in the city. The courses in Antigua are known as some of the best in the world. The system of total immersion is used. This is where the student lives with a local family who only speak Spanish, the student learns  about the food, culture and traditions of Guatemalan families. During the school day they have one-on-one class with their teachers for up to eight hours per day.

At its peak Antigua had 38 churches , 16 religious orders with their monasteries and convents, and many more religious buildings. In 1773 the capital was reestablished in the Ermita Valley, following  a devastating earthquake.  The city languished for almost 200 years until coffee plantations were constructed in the area sometime in the latter part of the 19th century. New prosperity came and slowly the city restored itself.

Antigua was the third capital of Guatemala. The first was founded in Iximche at Cakchiquell Maya City located today about 45 minutes from Antigua. The city was named Ciudad de Santiago de los Caballeros in honor of St. James, the day it was founded was July 25, 1524. The capital was moved on November 22, 1527  after a series of Cakchiquel uprisings, though retaining its original name.  The second capital was located in what today is known as Ciudad Vieja or “Old City”, referring to the fact it was founded before the present day Antigua . The capital was moved from Ciudad Vieja after a volcano eruption caused a huge flood and causing almost the entire city to be destroyed on September 11, 1541.

Because of the flood the city was moved just five miles away to the Panchoy Valley. On March 10, 1543 present day Antigua was founded by the Spanish conquistadors and named Santiago de los Caballeros.  A 7.4 magnitude earthquake struck Antigua on September 29, 1717 destroying more that 3,000 buildings with much of the architecture in the city being lost. Again in 1773 another earthquake destroyed a considerable part of the city and this time authorities decided to move the capital a fourth and final time to the Ermita Valley where the capital remains to this day, Guatemala City.

You can fly into Guatemala City via many different airlines around the world including Iberia, American, Delta, Continental, TACA, Lacsa, Air Mexico and others. The flight from Miami is two hours and twenty minutes and from Los Angeles five hours. From Guatemala City to Antigua you can take taxis from the airport, they are reasonably priced and safe. There are shuttle buses and rent a car offices for Budget, Hertz and others. If you are driving you can take the CA-2 out of Guatemala City that heads southwest towards Antigua.