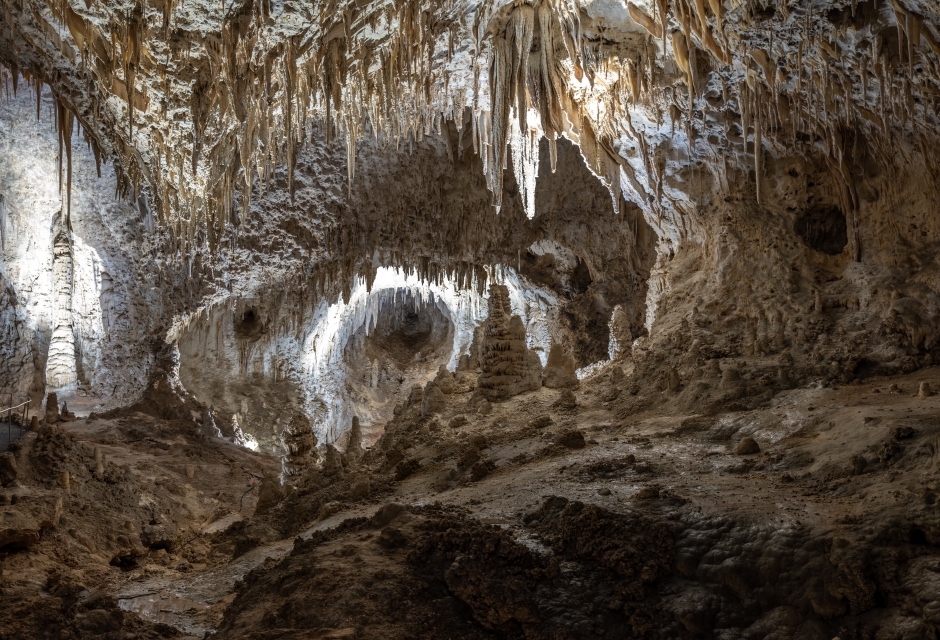 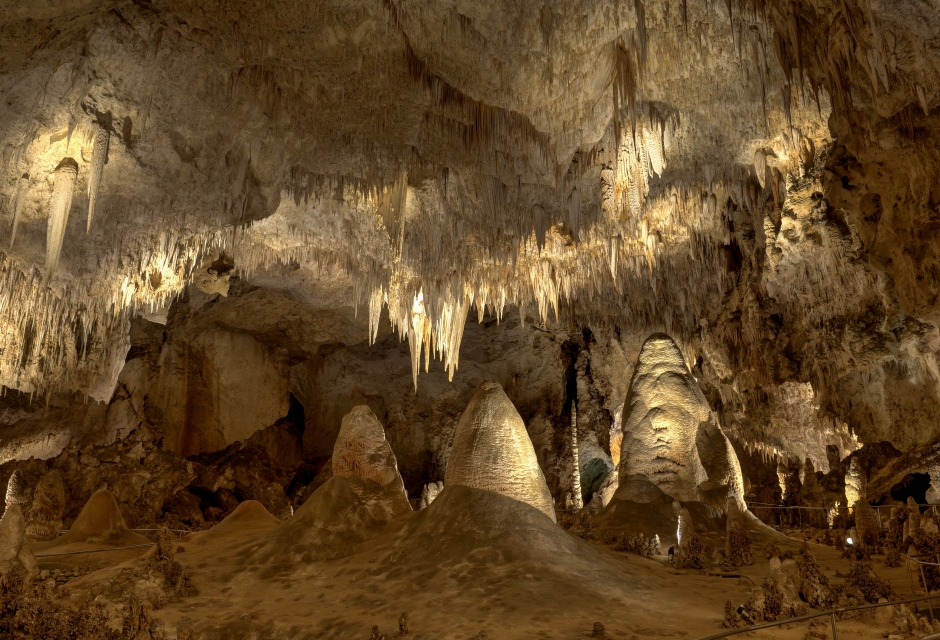 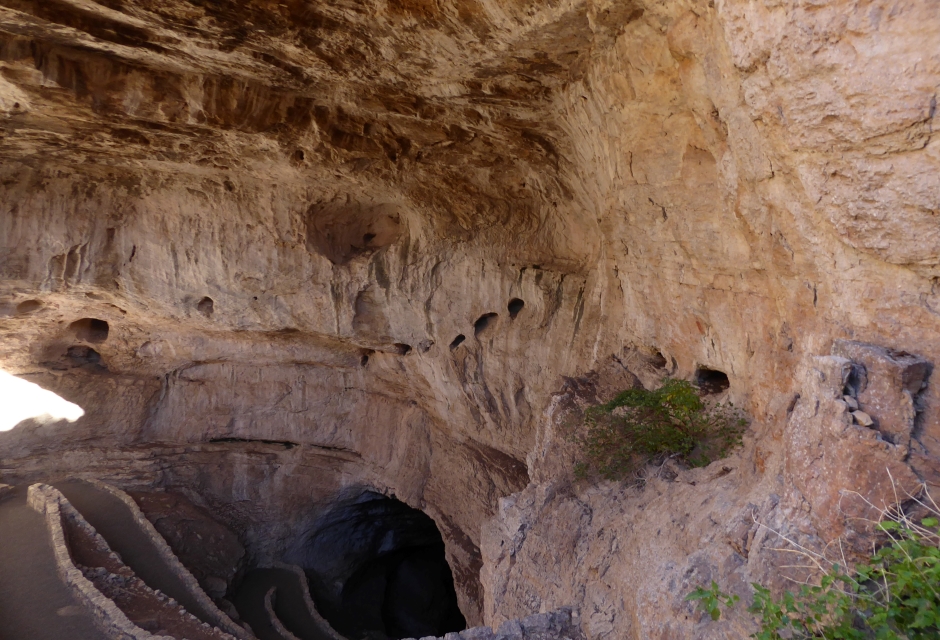 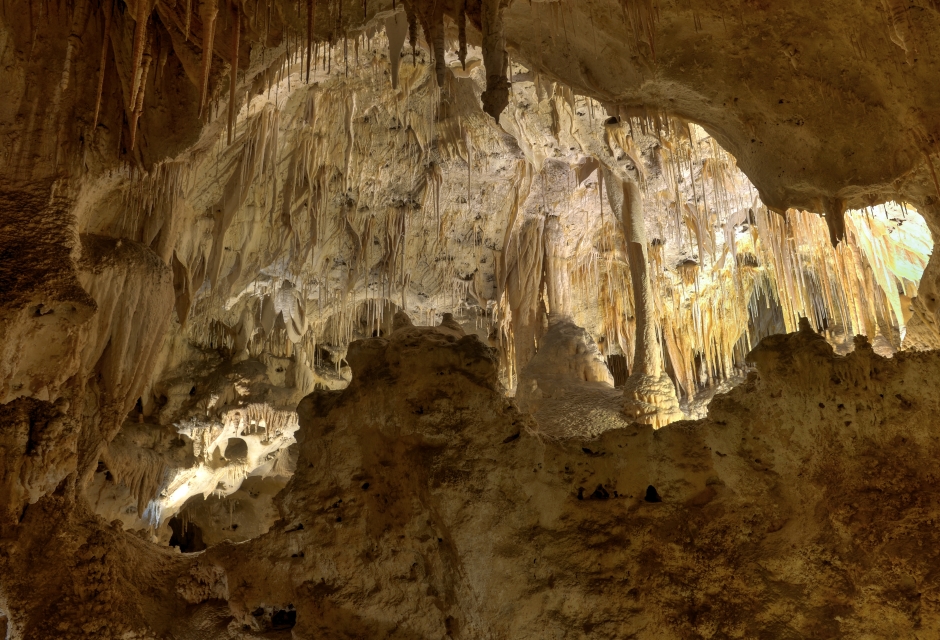 The Carlsbad Caverns National Park, located in New Mexico, is made up of over 100 limestone caves.  They are notable because of their size and diversity.  The caves were formed over the course of many centuries as sulfuric acid ate away at underground limestone.  Scientists continue to study this area, as it is one of the only places in the world where speleothems continue to form.  These beautiful and decorative rock formations are one of the defining features of the caverns.  Carlsbad Caverns is also one of the only places where the study of geological processes is possible in an undisturbed environment.

The two most well known caves in the area are Carlsbad and Lechuguilla.  Carlsbad Cavern is the largest of these caves.  Lechuguilla is particularly well-known for its exhibits of gypsum and calcite formations.  Some accumulations of gypsum, sometimes referred to as “gypsum chandeliers” are 18 feet in length.

Touring the caves is certainly one of the largest attractions in the park.  A variety of self-guided and guided tours are available.  Self-guided tours began at the cavern entry and visitors can choose to take two different routes: the Big Room Route or the Natural Entrance Route.  Guided tours are offered and times may vary with the season of the year.  It does cost to take a tour, but price varies with each, ranging from $7 to $20 for adults.  Many tours also require reservations.

The King’s Palace tour lasts for approximately 1.5 hours.  Visitors are led by a park ranger through four caverns, descending 830 feet underground at the lowest point.  This tour allows visitors to see a variety of cave formations.  Rangers also conduct black-outs at some points throughout the tour, to allow guest to experience the natural darkness of King’s Palace.

The Left Hand Tunnel tour focuses on Carlsbad history, cave pools, and fossils.  The duration of this tour is approximately two hours.  This is the easiest of the tours on unpaved trails.

The tour of Slaughter Canyon cave is a more strenuous tour than many others.  The tour last approximately 2 hours, and visitors journey through an underground area that is completely without electricity or paved walkways.  However, visitors will see many worthwhile sights including Christmas Tree, a column decorated by natural crystal formations, and Monarch, an 89-foot tall column.

Tours through the Lower Cave include a descent down sixty feet of ladders, so visitors with a fear of heights or ladders may want to consider another tour instead.  Visitors taking this tour see a diversity of cave features.

The tours through Hall of the White Giant and Spider Cave are more for adventure-seekers.  Inside Hall of the White Giant, visitors must crawl through tight passageways, climb ladders, and free climb to experience much of the cave’s natural wonders.  This tour takes approximately four hours.  Similarly, Spider Cave requires visitors to crawl and climb through different sections.  It has been likened to navigating an underground maze.

The bat flight programs are also of interest.  The times for these programs vary with season, so it is important to check out times beforehand.  Just at sunset, park rangers give talks about bat flights.  At this time, hundreds of bats exit the cave at once in search of food.  The best time to observe the bat flights is during July and August, when new baby bats join the flight.

The caves in the area were formed between 250 and 280 million years ago.  Native Americans inhabited the area above the caves around twelve to fourteen thousand years ago.  Evidence of their inhabitance, including cooking sites and pictographs, has been found within the park.

The caves probably were not discovered by settlers until the 1800s.  They were drawn to the area by thousands of bats that flew out of the cave entrances in the evening.  Some settlers ventured into the caves, hoping to collect bat guano and sell it as fertilizer.  A young man by the name of Jim White was among this group.  He was fascinated by the caves and began exploring.   However, no one believed his accounts of the cave’s beauty until photographs were taken by Ray V. Davis in 1915.  His photographs, displayed in the town of Carlsbad, sparked interest and suddenly people flocked to the caverns.

In 1923, Carlsbad Cavern was made a National Monument and Jim White became its first chief ranger.  In 1930, Carlsbad Caverns National Park was established to protect Carlsbad and the surrounding caves.

If you are coming from Roswell or Albuquerque, take US-285 south for 67 miles.  Then turn right onto NM-524 east and follow it for 8 miles.  Turn right again onto US-180 for 20 miles, then turn right on NM-7.  The entrance will be seven miles down this road.