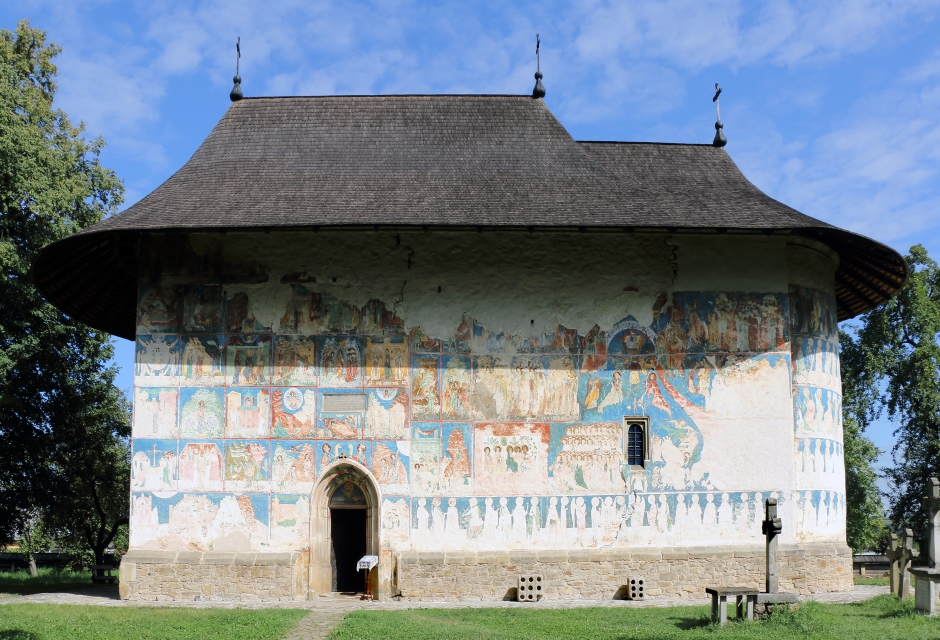 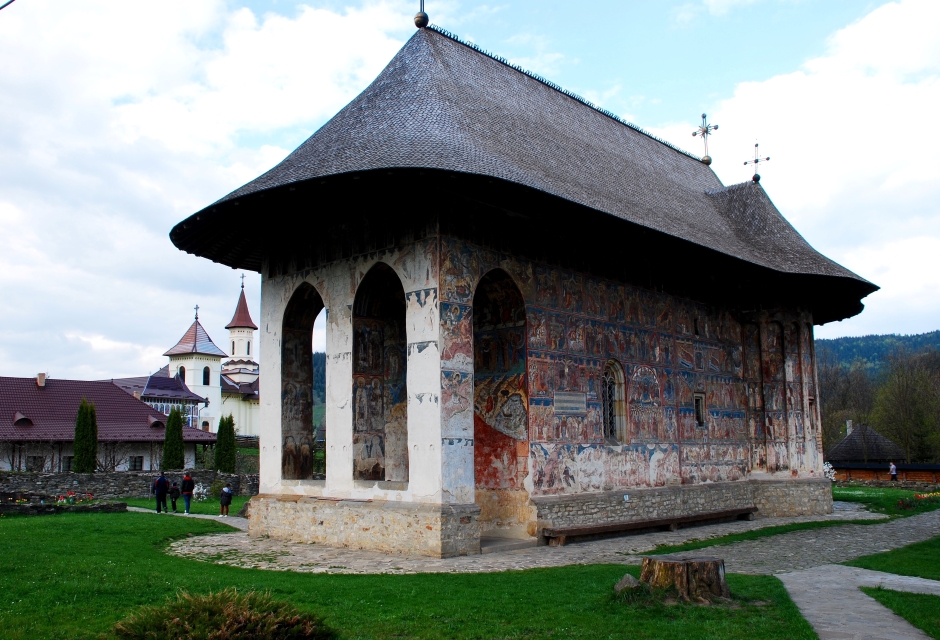 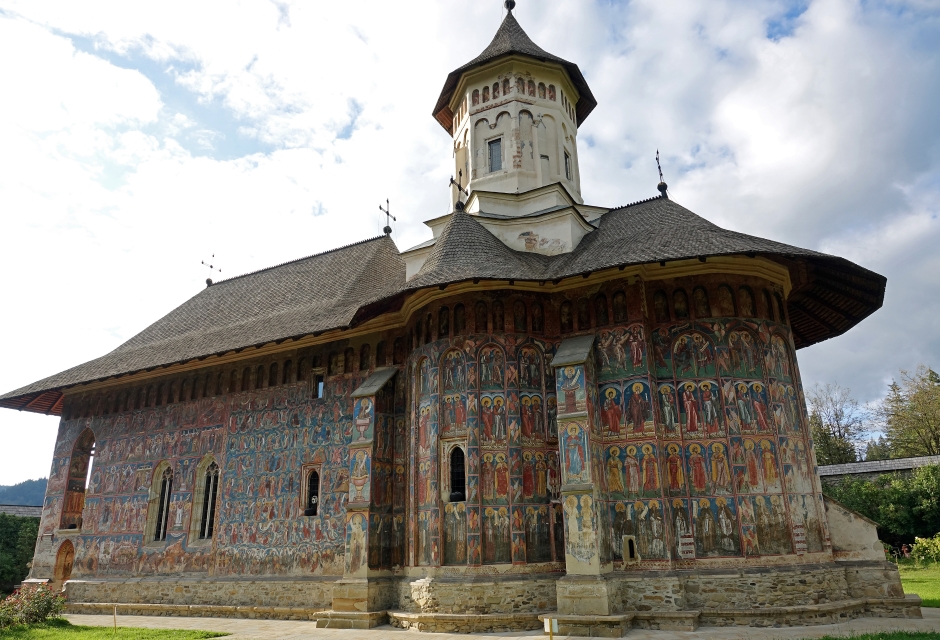 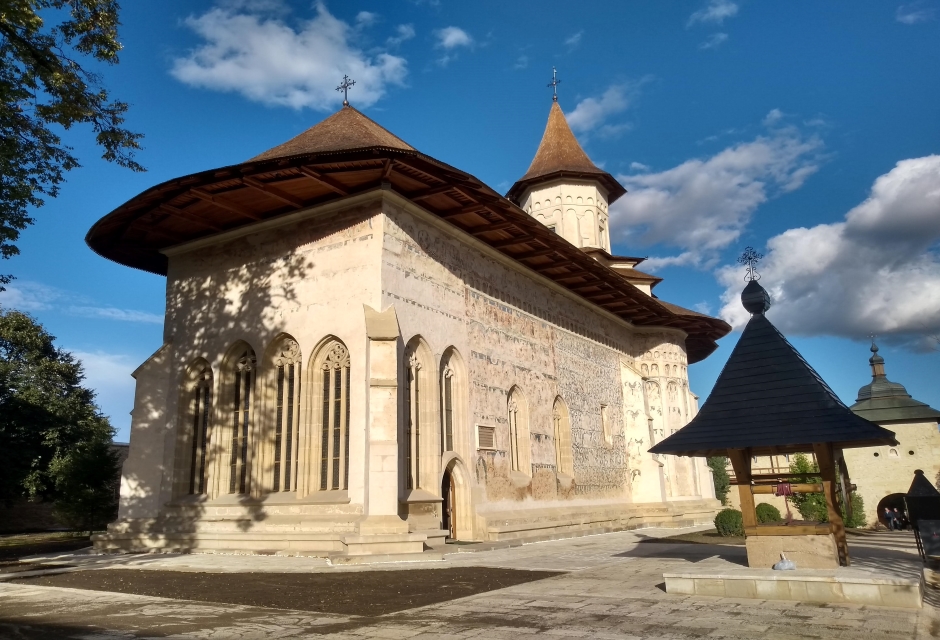 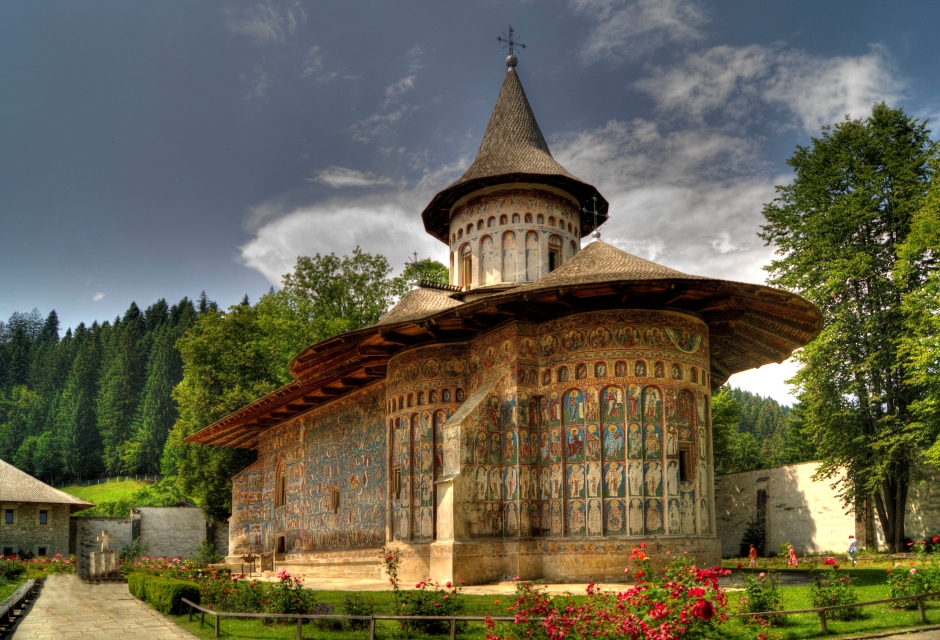 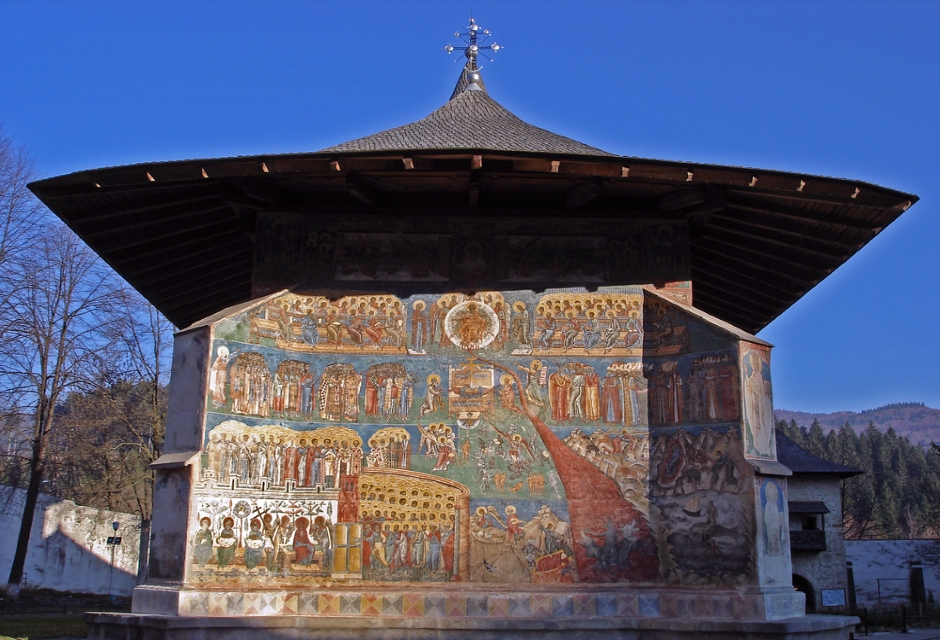 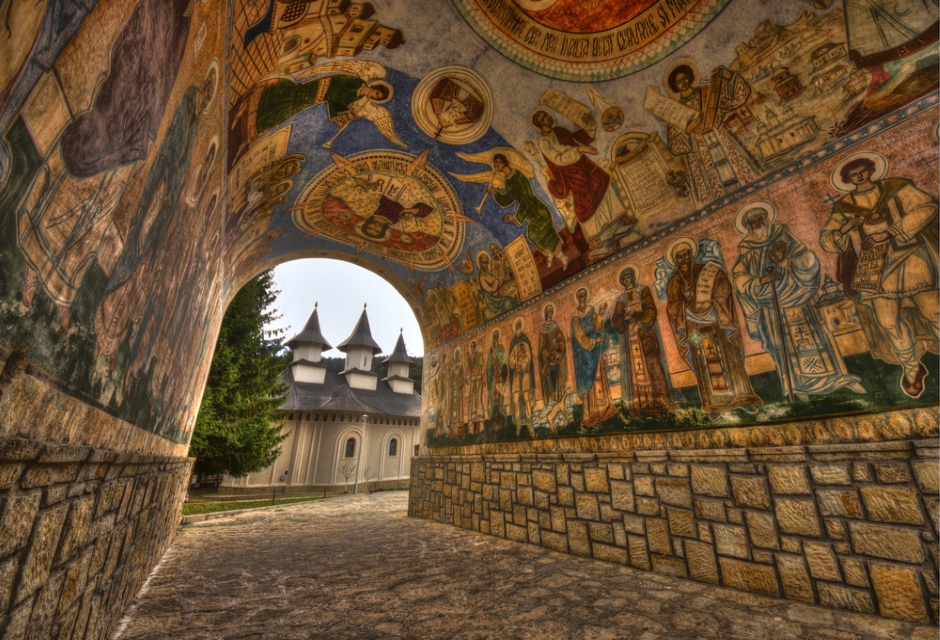 Introduction to the Churches of Moldavia

The Churches of Moldavia are a site featuring eight Romanian Orthodox churches in northern Moldavia dating from the 15th and 16th Centuries. These churches are:

The Churches of Moldavia are a site featuring eight Romanian Orthodox churches in northern Moldavia dating from the 15th and 16th Centuries. These churches are:

The Church of the Beheading of St. John the Baptist has no belfry tower, having been constructed as a private home and only later converted to a monastery, which was founded in 1503. The western wall features a scene from Genesis, painted by Dragos Coman, considered to be one of Romania’s finest mural painters of the 16th Century.

The Church of the Assumption of the Virgin of the former Humor Monastery is paradoxical: a physically tiny church, it is bursting with fascinating features. It lacks a steeple, instead having only a shingled roof, which implies that it was built by an elder or official rather than a Voivode. The frescoes are no less impressive than other examples, though, but a rich reddish brown is the dominant hue, with only touches of blues and greens to complement the browns. Within are hosted an invaluable collection of religious icons from the 16th Century.

The Church of the Annunciation of the Moldoviţa Monastery features blue and gold exterior paintings completed in 1537, including an illustration of the Siege of Constantinople and the Tree of Jesse – Christ’s genealogy, a popular subject for Middle Ages religious art.

The Church of the Holy Rood of Pătrăuți was founded by Stephen the Great, and is the oldest extant religious site he created. The west façade still holds some of its original mural paintings, but only the church and bell tower remain from the original monastery.

The Church of St. Nicholas and the Catholicon of the Probota Monastery are all that remain of what was once the residence of one of the Voivodes of Moldavia. It has undergone repeated restoration work throughout its life, the latest of which were in 1930, but it remains a magnificent sight. There is a little museum located here featuring artifacts, icons, and coins from the site.

The Church of St. George is home to relicts of St. John the New, stored in a beautifully decorated silver casket. There are frescoes along the outer walls which illustrate New and Old Testament scenes, and the interior has a beautiful mosaic roof.

The Church of St George of the former Voroneţ Monastery is considered as skilfully painted as the Sistine Chapel, and uses a particular shade of blue so extensively that that shade is known as Voroneţ Blue. Nobody has been able to decipher the composition of pigments used to create this colour. The monastery is home to a community of nuns who offer tours of the church, as well as painting workshops.

The Church of the Resurrection Suceviţa Monastery is one of the most internationally renowned examples of Moldavian church, with internal and external frescoes in excellent condition. The entire outside of the church is painted in bright red and blue frescoes, and the interior is likewise covered, with every square inch painted in traditional iconography. The towers are defensively buttressed, making this church somewhat fortress-like in aspect.

The tradition of painting the churches so thoroughly in Moldavia came about from a more general Christian tradition of decorating churches. After the invasions of the Ottoman Empire, the Moldavian region flourished culturally, and in the 15th and 16th Centuries many churches sprang up, decorated in increasingly ornate ways.

The oldest of these are the Church of the Holy Rood of Pătrăuți and the Church of St George of the former Voroneţ Monastery, both constructed in 1487 by Stephen the Great. The Church of the Beheading of St. John the Baptist was built in 1503 to be the personal home of Luca Arbore, the governor of Suceava.

In total, then, these churches represent almost a hundred years of tradition and cultural growth and development. Some have endured damage or restoration, while others – the church at Suceviţa particularly – have survived relatively intact.

Tour operators run buses to and between the sites, which are spread out across the entire region of Moldavia, but otherwise your only other option is to rent a car.

The easiest and most popular base from which to explore is the city of Suceava. Flights to Suceava are available from Bucharest several times a week, and trains inbound from Bucharest, Ploiesti, Buzau and Focsani, as well as Moscow and Kiev.