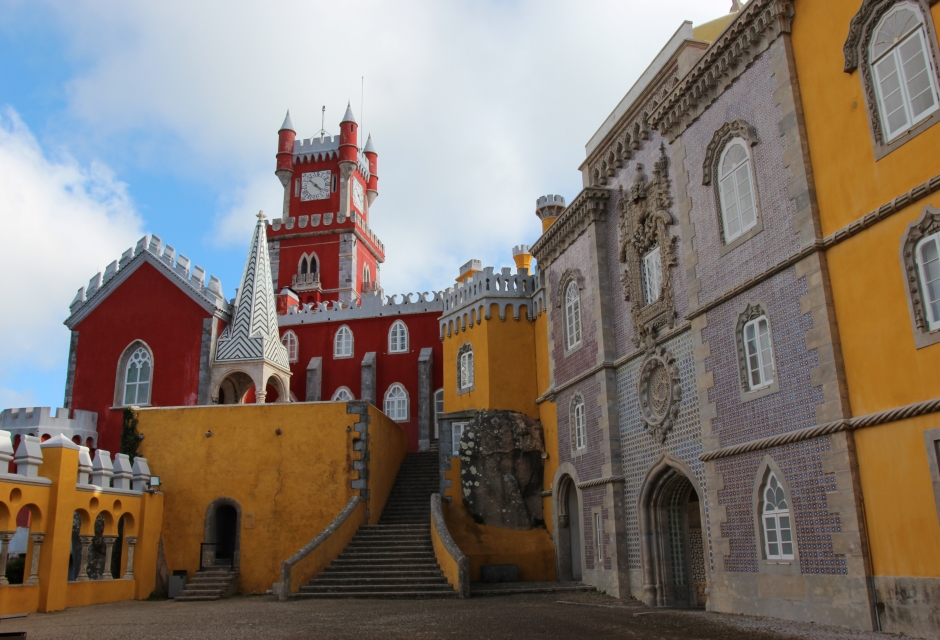 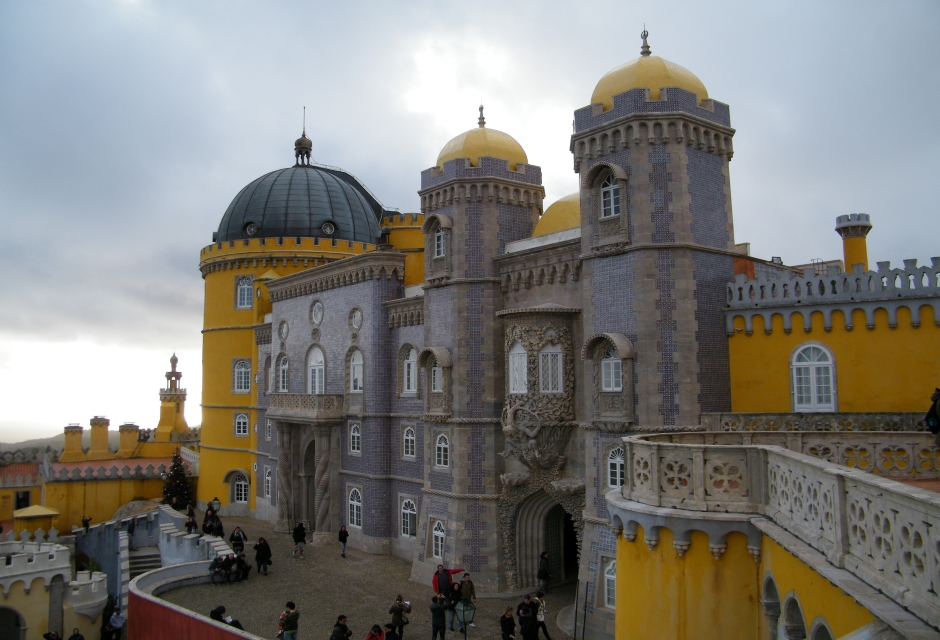 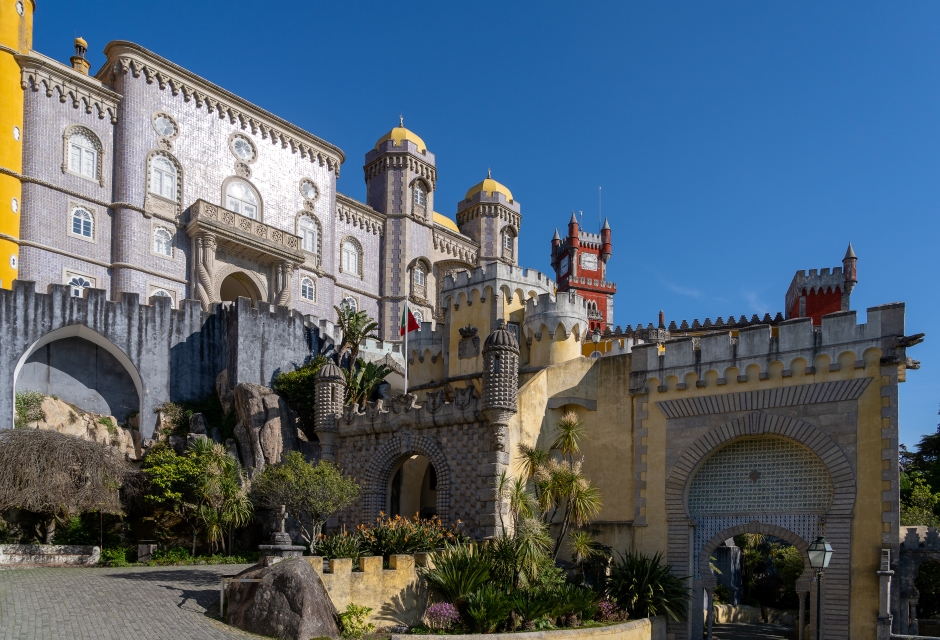 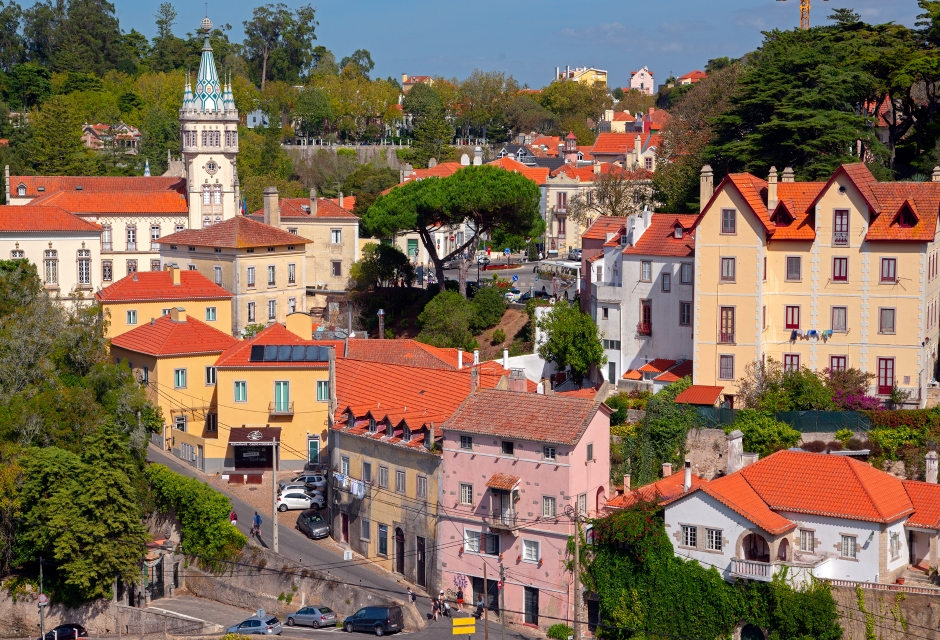 Introduction to the Cultural Landscape of Sintra

Sintra is a picturesque town which isn’t far from Lisbon and, as such, is a popular day-trip from the city.

One of its most spectacular sights is Quinta da Regaleira, a sprawling mansion estate which contains a gothic palace, chapel and fountains within four hectares of beautiful forested land and manicured gardens. There are also tunnels and grottoes beneath it.

The Pena National Palace was the summer retreat of Portuguese monarchs in the 18th and 19th Centuries, and stands on a hill overlooking Sintra. Constructed from intentionally mixed styles, it is surrounded by forest, and has great views across the town.

Sintra National Palace is a medieval palace which is well-preserved – in fact it is the best of its type remaining today within Portugal. It has seen near-continuous use since it was built, only becoming uninhabited in the late 19th Century.

The Monserrate Palace is something of an oddity, built in 1858 for an English baronet in a Moghul-inspired style. On paper, it sounds out of place, but the Palace is stuffed full of Gothic Revival features, blending with the exterior in true Portuguese style.

Seteais Palace is fairly novel, as it was built in the 18th Century as a private palace, but since then has been expanded on, sold and re-sold several times, and now is actually a luxury hotel which preserves its original features.
The Castle of the Moors is atop a hill, and was built in the 8th and 9th Centuries, during the Moorish occupation. Undamaged during the conquest of Lisbon, it survived well until an earthquake in 1755, which did extensive damage. The ruins are carefully preserved, and make an excellent monument.

Sintra is in the Lisbon Region of Portugal, less than half an hour from the city centre by train. Because of its proximity and Romantic appearance it’s a very popular day trip both for tourists and locals alike. The historic architecture, a mishmash of different centuries all cosying together to present a romantic ideal of a town, is tucked away in hectares of forest.

Many of Sintra’s attractions perched on the surrounding hilltops, each with views more amazing than the last. The Quinta da Regaleira is one of the more popular hilltop destinations, set in four hectares of forested parkland. Built between 1904 and 1910, the palace and other buildings peek from the trees and flowers like Victorian follies, their Gothic spires and turrets giving the Quinta a fairytale air.

Another hill is home to the Pena National Palace, whose gold and red walls were recently repainted to replicate their original design. Originally a small chapel, the site was a pilgrimage destination for hundreds of years, but in the 18th Century it was destroyed by both lightning and earthquake. Prince Ferdinand took ownership and transformed the ruins into a Summer Palace for the Portuguese Royal Family. He built the surrounding park at the same time, and wanted it to feel otherworldly, so had trees from around the world delivered and planted – there are Chinese Ginko, American Sequoia and Japanese Cryptomeria living side by side.

The Castle of the Moors is an artefact from the Iberian Peninsula’s 300-year Moorish occupation. Built in the 8th Century, it overlooks Sintra from the Sintra Mountains. The plains below it were once agricultural land, and required protection from raiders, but after the Conquest of Lisbon in 1147, the castle was voluntarily surrendered to the Christian forces, which left it amazingly intact. Its state of good repair was maintained for the next five hundred years as successive owners added to it, patched it up, and kept it in a reasonable condition, but when the area was no longer strategically important it was abandoned. The Lisbon earthquake of 1755 did the rest, and what remains is a series of ruins which give an excellent idea of the castle’s structure, as well as phenomenal views.

Down in the town itself is the Sintra National Palace, or Town Palace. During the 10th Century it was a castle paired with that in the mountains, and the Moorish rulers lived here. Alas nothing of that castle remains, and the ground has been built on by Portuguese kings since the 12th Century. Despite this, there are elements of Moorish style in the Palace, the majority of which you see today was built in the 15th and 16th Centuries, and its white walls are home to rooms decorated with painted ceilings and mullioned windows.

The Monserrate Palace was commissioned by Sir Francis Cook, the English Viscount of Monserrate. It became the summer residence for he and his family, but while the building remains of architectural interest, what draws visitors year-round are the gardens, part of which back onto the Sintra Botanical Gardens. There are workshops teaching visitors how to plant bulbs, nurture seeds, and protect gardens from pests while encouraging beneficial creatures. These run every few weeks, so check ahead.

The Seteais Palace was built in the late 18th Century for one of the Dutch consuls to Portugal, Daniel Gildemeester. Sold to Diogo José Vito de Menezes Noronha Coutinho after Gildemeester’s death, the palace has changed hands multiple times since, and Gildemeester’s original house is now only one wing of a far larger building. Now, the Setais Palace is a five star hotel.

There is archaeological evidence to support the existence of human settlers in the Sintra region from the early Neolithic era. The soil is fertile, the mountainous region creates a stable micro-climate, and the river Tagus is nearby, providing excellent resources and protection for human life.

Where things really become interesting is the 2nd Century BC, when the Romans occupied the area as part of the territory of Olisipio (modern-day Lisbon). There was a Roman settlement at Sintra, but no written records exist of this time.

When the Iberian Peninsula was taken by the Moors, Sintra became an important centre of agriculture, and two castles were built to protect it in the 9th Century. One fell during the Reconquista, damaged beyond repair when it was taken by Alfonso VI of Leon (in 1093), re-taken by the Moors in 1095, and taken again by King Afonzo Henriques in 1147. The other, the “Castle of the Moors” remains as ruins atop a nearby mountain.
In 1154 Sintra was accorded the status of a commune, and divided into four parishes. Shortly after, in 1181, the Templars were ousted from the country, and their properties were handed to the Order of Christ, who were realistically just the Templars under a new name. You could look at it as one of the first massive rebranding exercises in marketing history. The Order were later instrumental in funding and participating in the Portuguese Discoveries under Henry the Navigator.

In 1350 the Black Death came to Sintra, the town’s humidity and cool climate helping it progress swiftly. The town was plunged into decline, the majority of the population affected by the plague in one way or another, but the economy was greatly restored when King John I began building the Palace of Sintra in 1415. The work brought jobs and prosperity, and allowed the population to begin recovery.
Sintra was also to be the centre of controversy throughout this upheval. King Ferdinand married Lady Teles in 1374, and donated the town to her, but in the Dynastic Crisis ownership bounced around until John I became the King, founding Portugal’s second dynasty. Sintra became an important town to the new dynasty – King Alfonso V was born at the Palace of Sintra in 1433, and died there in 1481.
By the 16th Century the town was greatly expanded. It had become a popular hunting retreat for Kings over the decades, and the public spaces had become enriched with sculpture and art, as well as buildings to accommodate the growing city.

Sintra’s importance as a seat of political power was shifted abruptly away when Spain gained control of the country, and instead became a refuge for Portuguese nobles who exiled themselves to the city away from Castillian courts. When the Restoration came in 1640 there were over four thousand people living in Sintra.

After the 1755 Lisbon earthquake, Sintra was forced to do a great deal of rebuilding, and many new buildings were erected which embraced the contemporary styles. In the 18th and 19th Centuries, Romanticism took hold, and this Gothic city peeking from the trees attracted visitors such as Lord Byron, Almeida Garrett, Richard Strauss and William Beckford. Sintra’s Literary heritage began to flourish, as each and every writer waxed lyrical about the beauty and wonder of this small city.

By the 20th Century Sintra was a summer place which drew visitors from aristocracy and merchant wealth from around the world. With money came patronage of the arts, and the city became extremely welcoming to artists, musicians and composers, with some of Portugal’s most famous creators of artworks in residence.

Sintra is readily accesible by train or bus from Lisbon. If you are traveling by train, buy both your outward and return tickets from Lisbon station.

Renting a bicycle in Lisbon and taking it on the train is a popular way to make this a day trip from the city.

Parking in Sintra is poor, so it is not advised to arrive by car.

The bus service is fast and frequent, so travel around Sintra by bus. Attractions are only short walks from each bus stop.

There is a hiking trail between the town and the Moorish Castle, but the entrance is easily missed if you do not bring a map.

Most attractions are closed on Mondays and during lunch hours.