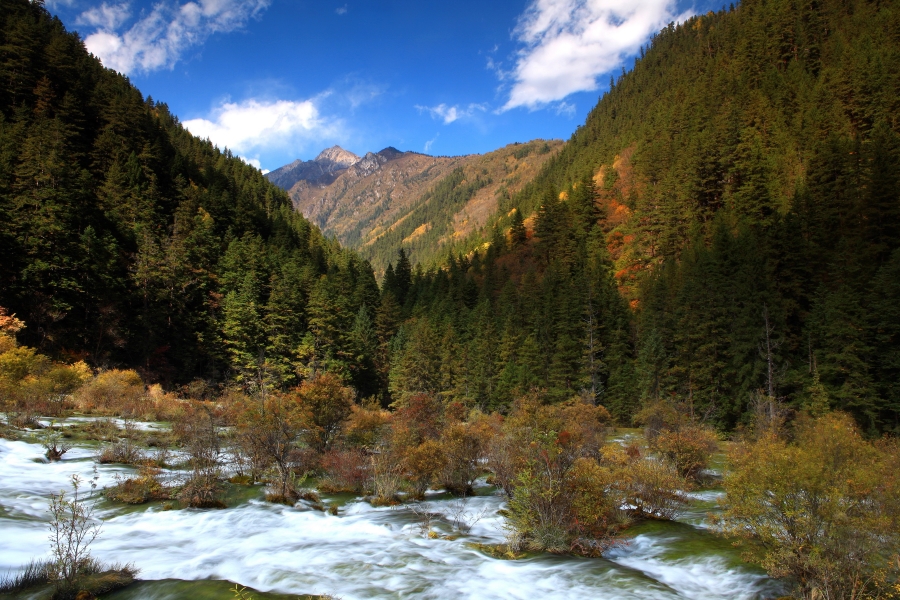 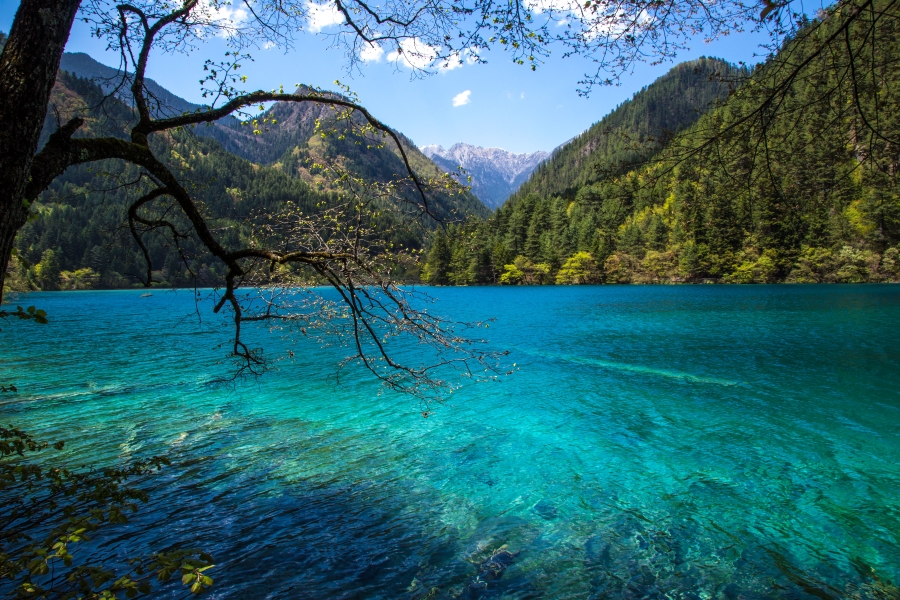 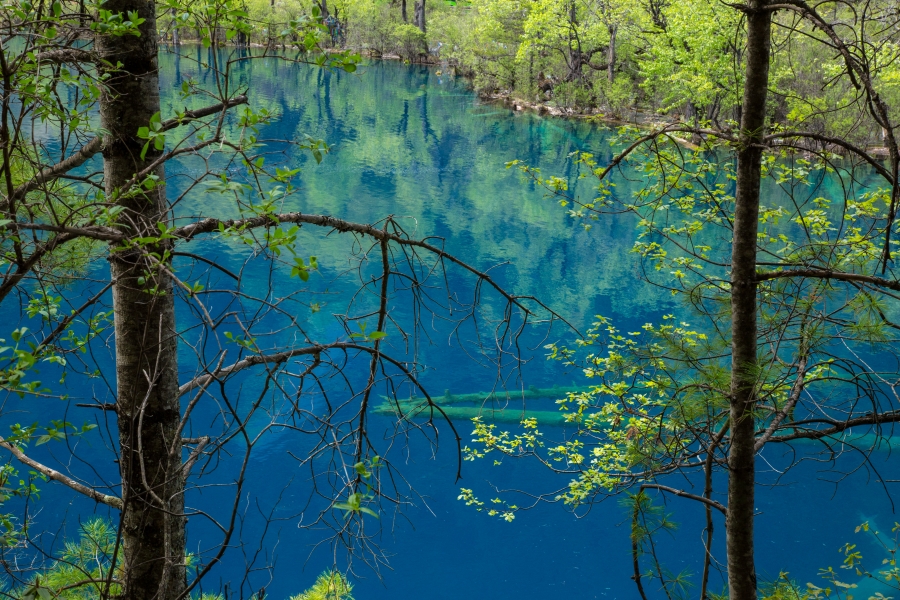 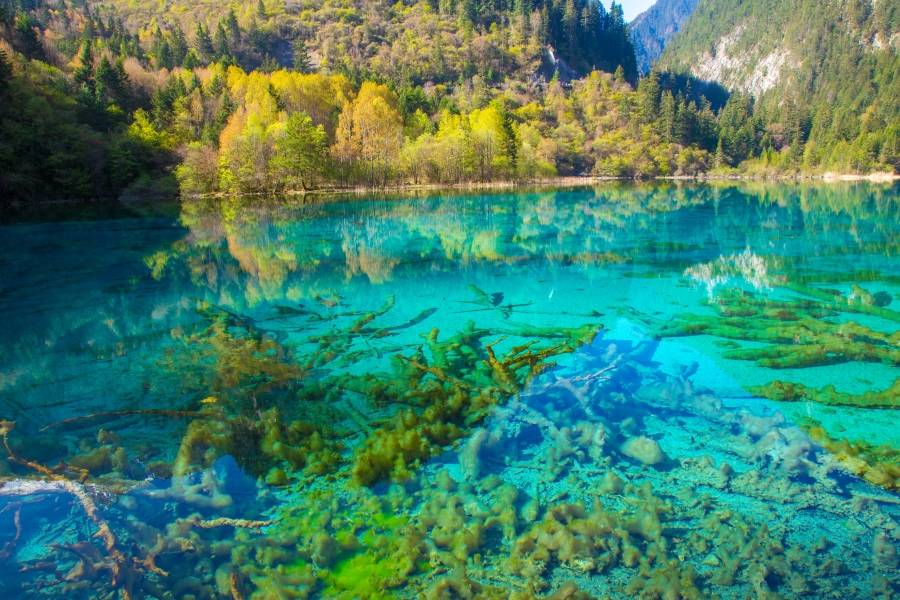 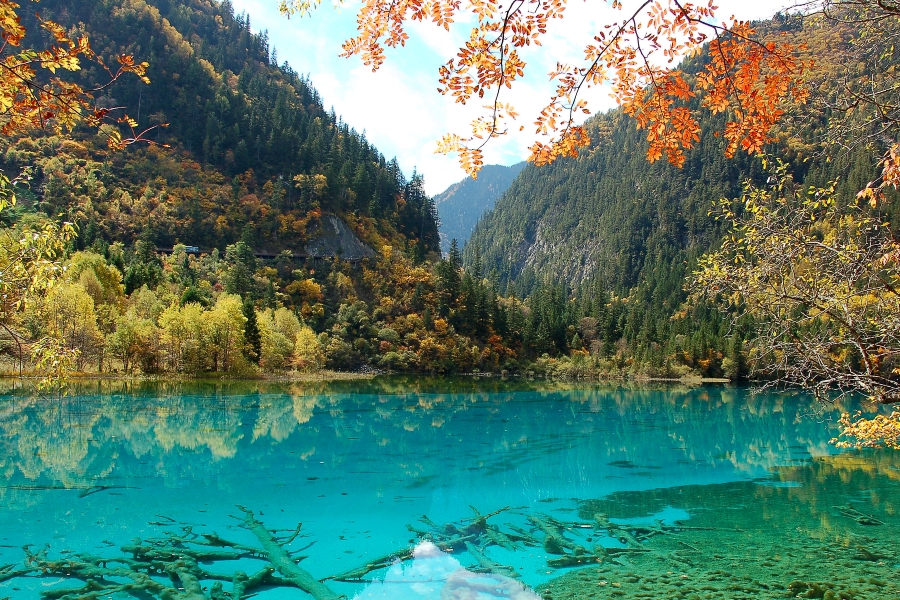 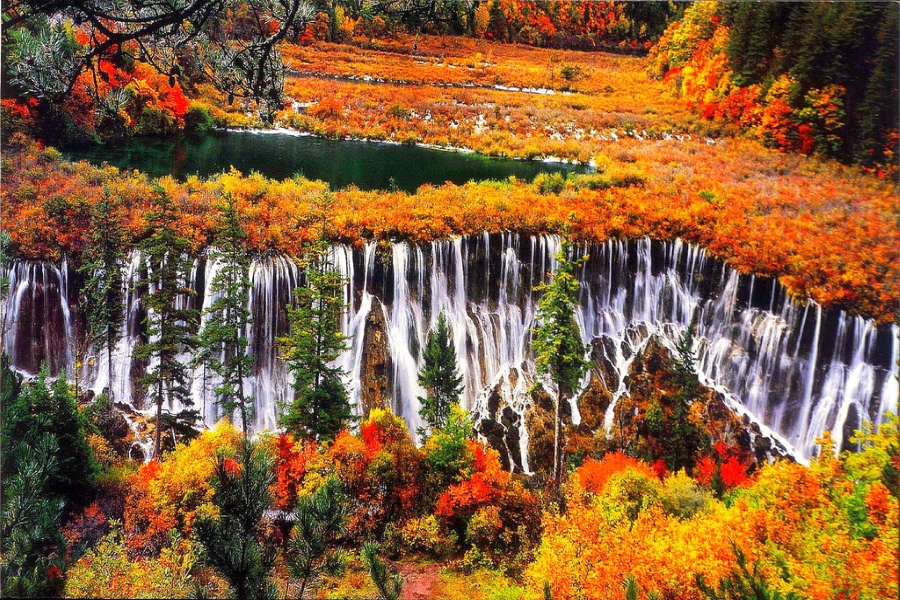 The Jiuzhaigou National Park is also known as the Valley of Nine Villages. It is an important nature reserve in the south western Sichuan province of China. Of note are its numerous multi-tiered waterfalls and beautiful lakes. The area bears significance for local Tibetans who view it as a holy mountain and watercourse. Its plentiful natural resources include snow-capped mountains, lush green forests, sparkling blue lakes and folk traditions of the local Qiang and Tibetan peoples. According to legend, Dago, the deity of the mountain, was in love with the goddess Semo, so he bestowed her with a mirror composed of cloud and wind. Then the devil caused trouble and Semo accidentally shattered the mirror into 108 pieces, thus creating the 108 lakes in the park.

.The park is situated at the Minshan mountain range’s southern extremity and 330 kilometers to the north of the Chengdu provincial capital. The park is also a section of Jiuzhaigou County, which used to be known as Nanping County. It is also a part of the Aba Tibetan Qiang Autonomous Prefecture close to the Gansu border of northwestern Sichuan province. The valley of Jiuzhaigou park occupies an area of 720 square kilometers. Its buffer zones span an extra 600 square kilometers. Its various elevations go from 1,998 to 2,140 meters. It possesses a cool temperate climate with -1 degrees Celsius temperatures in January, 17 degrees Celsius in July and a mean annual temperature of 7.2 degrees Celsius. There is approximately 661 millimeters of rainfall per year, most of which falls from May to October.

The ecosystem of the park consists of broad-leaf woodlands and forests including varied highland and mixed mountain systems. These mixed forests are considered to be virgin and therefore make up 300 square kilometers of a core scenic site. A popular time to visit the forests is during autumn when leaves adopt orange, yellow and red tints. Among the attractive species of plants are the native bamboo and rhododendron.

Among the fauna is the golden snub-nosed monkey and famous endangered giant panda. There are only 20 individual pandas remaining and few monkeys as well. The continued survival of these two species is endangered by tourism which is currently on the rise. Other animal species are 140 varieties of birds.

The spectacular landscape of Jiuzhaigou is composed of karsts that were formed by hydrological, tectonic and glacial forces. Earthquakes have also exercised an influence on the terrain of the park since it rests on fault lines between the Yangtze Plate and Qinghai-Tibet Plate. Rocks in the area are composed mostly of dolomite, tufa and scattered shales and sandstone.

Three large gullies are also part of the valley landscape. In fact, they are the Jialing River’s source, which is a tributary of the famous Yangtze River system.

The beautiful lakes reflect numerous shades of green, blue and turquoise hues due to glacial activity. After rockfalls, the lakes were naturally dammed and subsequently amalgamated by deposits of carbonate. The bottoms of these lakes can be seen even at high depths.

The three valleys of Jiuzhaigou make a Y shape. Two of these valleys, the Zechawa and Rize, meet at the center of the park after flowing from the south, thus forming the Zhuzheng valley. Along the watersheds of these gullies is a network of 55 kilometers of roads to accommodate tourist shuttle buses. There are also small pavilions and boardwalks along this route.

Tourists generally visit the Rize Valley first which occupies an 18 kilometer stretch in the south-western area of the park. It is home to the ancient Primeval Forest, Swan Lake, Grass Lake that is covered by complicated patterns of vegetation, Arrow Bamboo Lake, Panda Lake, Five Flower Lake, Pearl Shoal and Mirror Lake.

At the Zechawa Valley there is the Long Lake, Five-Color Pond and Seasonal Lakes. Finally, the Shuzhen Valley has the Nuorilang Falls, Nuorilang Lakes, Sleeping Dragon Lake and Reed Lake.

There are also options for ecotourists at Zharu Valley which goes southeast from Shuzheng gully. This valley starts at the Zharu Buddhist monastery and terminates at the Daling, Red and Black lakes.

In its early history, the area that makes up the park was settled by different Qiang and Tibetan peoples for hundreds of years. However, the government did not officially find it until 1972. Subsequent logging endeavors of widespread proportions took place until 1979. At this time the Chinese government made such activity illegal and designated the site as a national park in 1982. It wasn’t until 1984 that the area was open to tourisism following the establishment of an Administration Bureau. Regulations and the layout of facilities were finalized in 1987. In 1984 there were 5,000 tourists, in 1995 there were 160,000 tourists and finally in 1997 there were 200,000 tourists to the park. This number has increased to an estimated 7,000 tourists per day since 2004. During the high season, a quota of 12,000 has to be implemented.

The Jiuzhaigou National Park was named a UNESCO World Heritage Site in 1992 as a category V protected landscape.

The park fee more than doubles during the peak season of April 1st to November 15th as opposed to low season from November 16th to March 31st. The park is open from 7:00 to 19:00 during the high season and from 8:00 to 18:00 during the low season.

There are direct flights available from Chongqing, Beijing, Chengdu, Hangshou and Shanghai to Jiuzhaigou. The Jiuzhai-Huanglong Airport is about 88 kilometers from the park. It is an hour and a half ride to the Jiuzhaigou scenic area. There is the Chengdu Xinnanmen Coach Station, Chadianzi Coach Station as well as coach stations in GuangyuanMianyang to Jiuzhaigou operating daily. Also available are tourist buses operated by private travel agents.