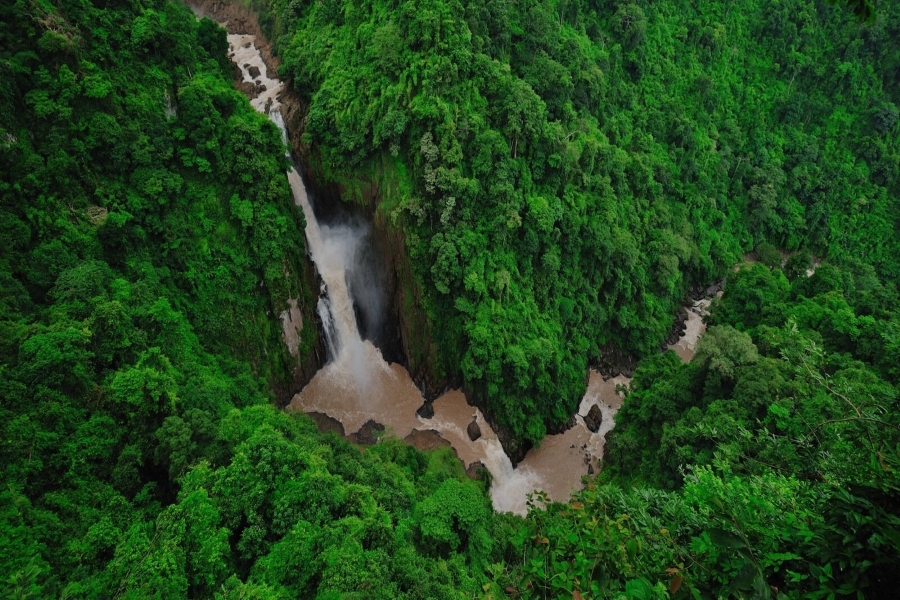 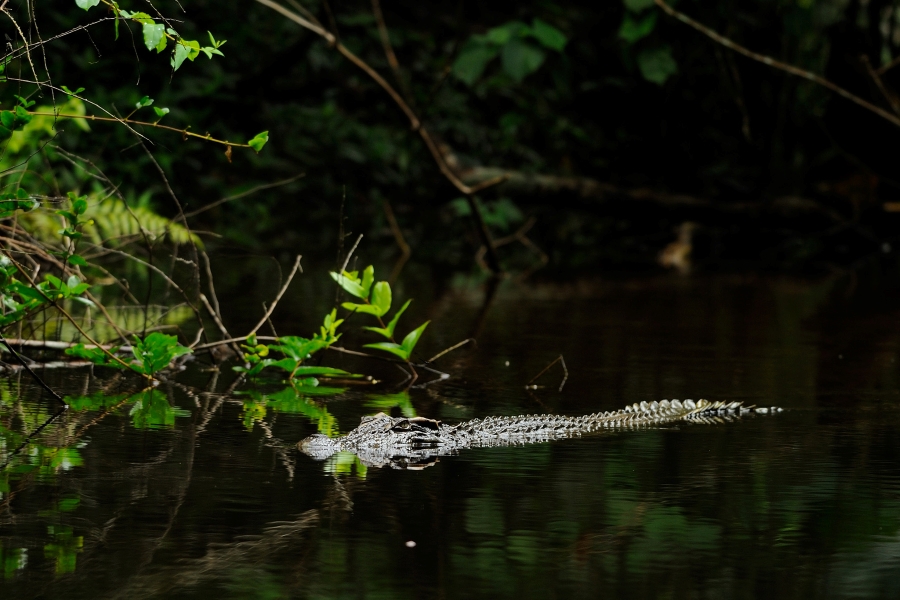 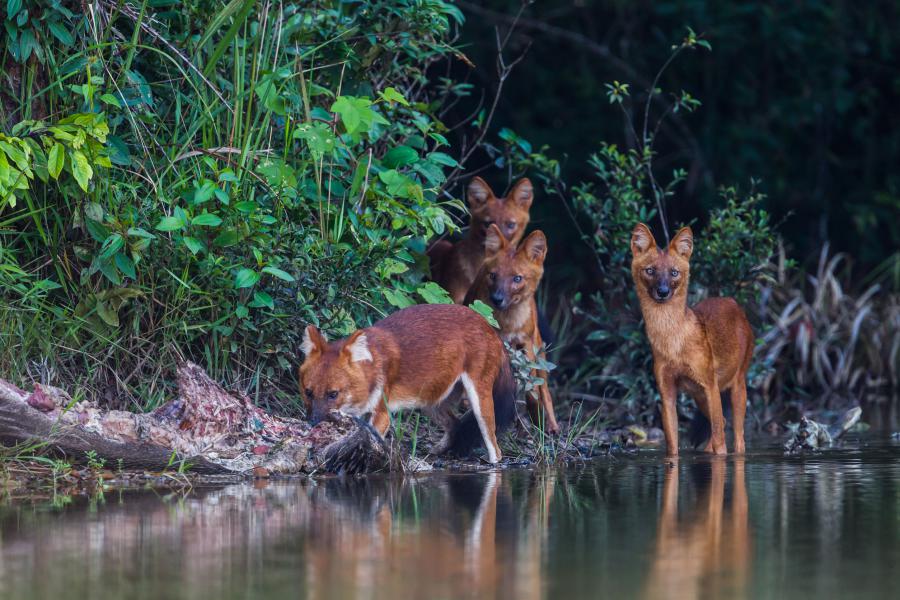 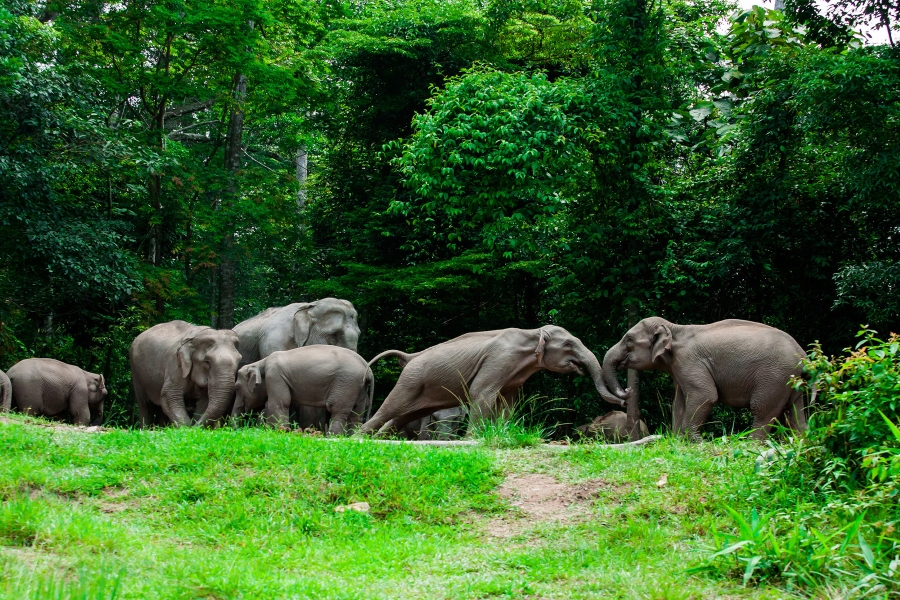 Khao Yai was Thailand’s first National Park and remains it’s most popular. This internationally important tropical forest in northeast Thailand is home to hundreds of fauna, birds, butterflies, reptiles and amphibians, some of which are classed as vulnerable or endangered species.

The National Park covers 2168 km2 and has many tropical monsoon forests, rivers, waterfalls and grassland providing an unspoilt natural habitat for a wide range of native animals. There are many miles of hiking trails from which to enjoy the abundant wildlife and beautiful environment. The two huge waterfalls, Heo Narok and Haeo Suwat, are always popular with local Thai’s. Khao Yai is very popular with bird watchers who may see and hear shrikes, great hornbills, warblers and grey-eyed bulbuls in the massive trees. Deer, monkeys, elephants and big cats may all be spotted on a visit and colorful butterflies and moths abound. There are also a number of endangered species which inhabit this wonderful area, known as the ‘green lungs’ of Bangkok. Just outside the National Park there are many restaurants and hotels which visitors can use as a base while staying and exploring this beautiful area.

Khao Yai National Park is in the Dong Phaya Yen Mountains, in north eastern Thailand. It was the first of Thailand’s National Parks to be established and altogether they now cover and protect around 11% of the country. This is the second largest national park in Thailand, covering over 2000 km2 with evergreen forests, spectacular waterfalls and grasslands. The most impressive waterfalls are the 80m high Heo Narok and the Haeo Suwat, which was where ‘The Beach’ was filmed.
Within the park the highest peak is Khao Rom at 1351m, along with Khao Lam and Khao Keaw. There are 5 main rivers flowing through: the Prachin Buri River, Nakhon Nayok River in the south, Lam Ta Kong River, Praplerng River in the north and the Muag Lek Stream in the north west. The rainy season is from May to October, but rains falls almost daily all year round. As a result there are some stunning waterfalls. During the winter it can be cold at night with temperatures dropping to 10C. Average annual daytime temperatures are around 23C.

Khao Yai possesses great natural beauty and plentiful wildlife in the tropical forest. It focuses on the conservation of globally threatened and endangered mammals, birds and reptile species and their habitatMore than 800 species of fauna, including 112 mammal species, 392 different bird species, 200 reptile and amphibian species and 3000 plant species can be found in this tropical forest ecosystem. Natural habitats have now been preserved to ensure the long-term survival of its residents. Species of animals include Asiatic black bears,  elephants, gaur, tigers, gibbons, Indian sambar deer, crab-eating macaque, Indian muntjac, dholes, and wild pigs. Endangered animals include important species of tiger, elephant, leopard cat and banteng.

The Khao Yai National Park has more than 50km of hiking trails, making it a popular recreation area for local visitors and foreigners wishing to escape the busy city of Bangkok. Quiet walkers may hear the gibbons and see the elephants at the salt licks along the road. Civets, squirrels, porcupines and wild pigs are common and snakes and lizards frequent the undergrowth. Birds are often heard rather than seen although hornbills can easily be spotted. An estimated one million bats live in a small cave on the edge of the park. Nighttime wildlife safaris on pick-up trucks are a popular way to spot deer, civet cats and other nocturnal feeders.

There is a rich diversity of over 2000 species of plants. Moss-draped trees, climbers and epiphytes can be seen amidst the jungle of rattan palms, lianas and strangler figs whilst lichens, fungi and ferns spread across the forest floor. Dry evergreen forest and dry deciduous forest covers the lower slopes of hills along with stands of bamboo. The Park manages the grassland by burning, to keep the trees from invading the precious grazing area used by deer elephants and guar.
This Monsoon Forest offers valuable habitat for the long-term survival of endangered and globally important species. It ranges from 400-1000 feet in altitude. The unique overlap of the range of two species of gibbon, including the vulnerable Pileated Gibbon, further adds to the global value of the area. In addition to providing an unspoilt, natural environment for resident species, Khao Yai plays an important role in the conservation of migratory species, such as the endangered Spot-billed Pelican and critically endangered Greater Adjutant.