Ancient archaeological and historic settlement of the Pueblo people 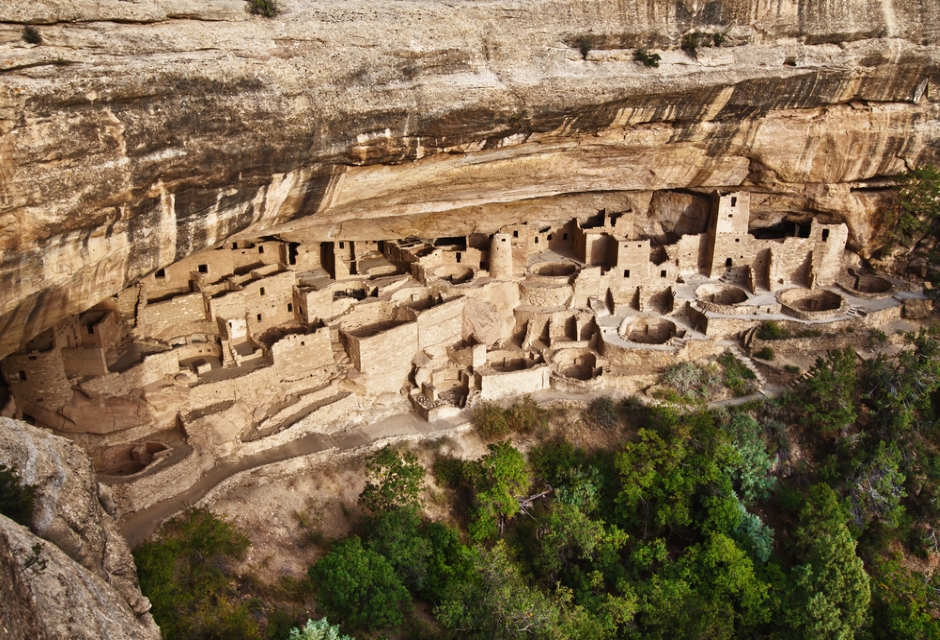 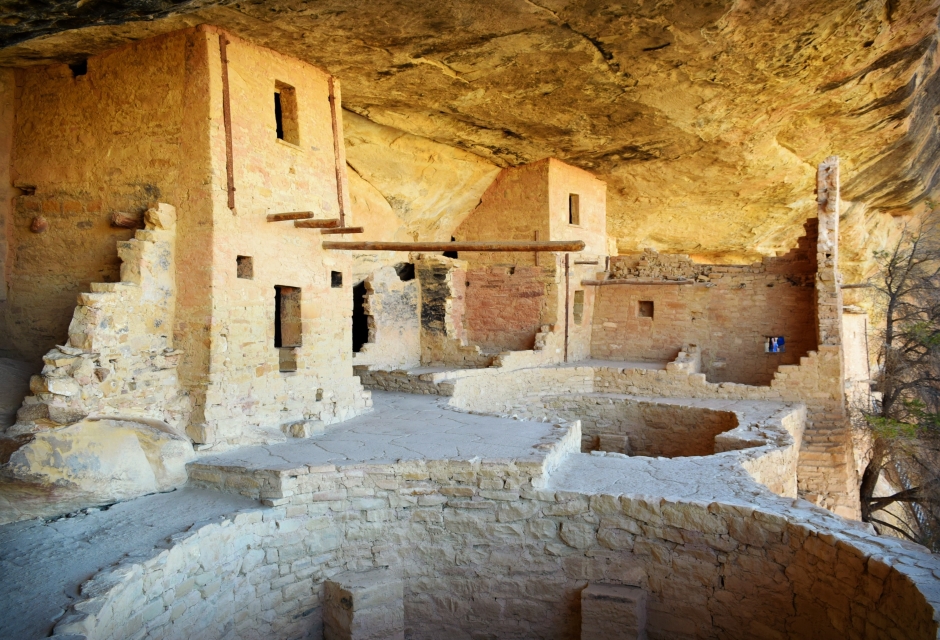 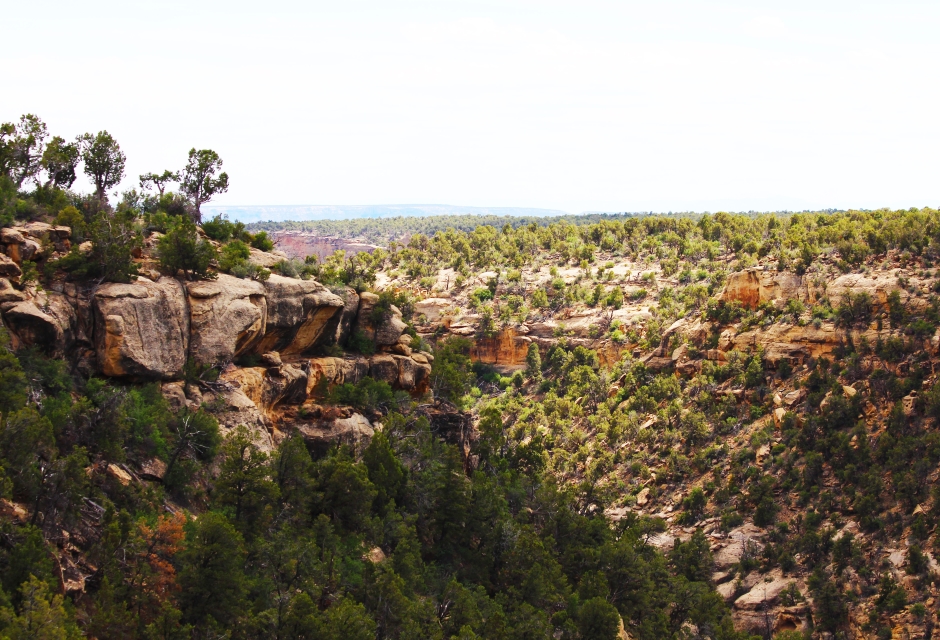 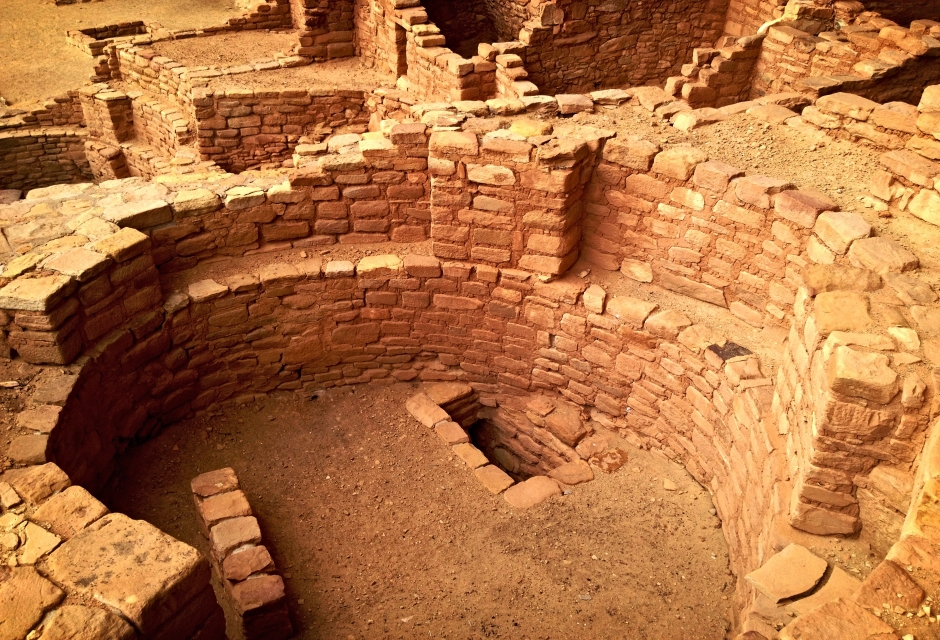 Mesa Verde, located in southwestern Colorado, is an ancient archeological and historic sight.  For nearly 700 years beginning in A.D. 600, the ancient Pueblo people made their homes in Mesa Verde.  Mesa Verde is a plateau reaching an altitude of about 8,500 feet.  Its name in Spanish means “green table.”

New discoveries are a routine occurrence in Mesa Verde.  The park is home to over 4,000 archeological sites such as pueblos and farming structures, as well as 600 cliff dwellings. These cliff dwellings are some of the best preserved in North America.  The Pueblo people began living in these dwellings, built beneath cliff overhangs, sometime during the 1190s.  They range from small one-room storehouses to complex villages consisting of 150 rooms.

Far View Visitor Center, located 15 miles from the entrance of the park, is a good place to start exploring Mesa Verde.  The center has several exhibits to view and also sells tickets to both Cliff Palace and Balcony House.

Cliff Palace and Balcony House are 8 miles and 10 miles from the visitor center, respectively.  Cliff Palace is one of the largest dwellings in Mesa Verde, containing 150 rooms and 23 kivas.  Balcony House is a mid-sized cliff dwelling, containing 40 rooms.  Both of these dwellings are accessible only by a ranger-guided tour.  Balcony House is said to be one of the most adventurous tours because visitors must climb a 32 foot entrance ladder and journey through tunnels and passageways.

Chapin Mesa Archeological Museum, located about twenty miles from the entrance, provides a look at the life of the ancient Puebloans.  The many exhibits display not only artifacts from Puebloan culture but also many prehistoric items.  Visitors can also choose to watch a film that explains the history of the area.

From the museum, Spruce Tree House, the third largest cliff dwelling, is easily accessible.  It contains 130 rooms and 8 kivas.  Considering that it was built somewhere between 1211 and 1278, it is in excellent condition and has required very little maintenance throughout the years. Other cliff dwellings that visitors may want to explore are Cliff House and Step House.

In addition to cliff dwellings, there are also a number of sights to be seen on top of the mesa.  Badger House Community is a site dating from about A.D. 650 and consists of four smaller sites, including a pueblo and pithouse.  Walking the trail through the site takes about 45 minutes.

Another must-see on the mesa is the Far View Sites Complex.  At its peak, Far View was home to hundreds of Puebloans, containing approximately 50 different villages. Today, many sites have been excavated and are available for viewing.

A ceremonial structure also atop the mesa, Sun Temple is a unique excavation and certainly a point of interest.  The walls, laid out in a “D” shape, are thought to have originally been 11 to 14 feet when the structure was intact.  A basin can be found in the southwest corner of the wall.  Now eroded with time, the basin is thought to originally have served as a sundial.  Access to Sun Temple is available only by self-guided tour.

When visiting each of these sites, it is important to check for tour hours and dates, as many dwellings are open only seasonally and only for certain hours.

Originally a nomadic people, the Puebloans first settled in Mesa Verde in about A.D. 550.  As farming gradually became their livelihood, the Pueblo people settled into villages on the mesa top.  Puebloan means “village dwellers” in Spanish, so the name is fitting.  They lived in buildings called pithouses, homes in which the living area sunk a few feet into the ground.

In about A.D. 1100, the Pueblo people began to construct stone buildings and in about 1200, they began to move into the alcoves of the cliffs. The reason for their move into the cliffs is unclear; perhaps for defense or for religious reasons. These cliff dwellings were built using small blocks of sandstone and a mortar made of mud and water.  Rooms were typically six by eight feet with an additional upper room used for storing crops.  The Pueblo people also built rooms called kivas, underground chambers typically used for religious ceremonies.

The Pueblo people inhabited these cliff dwellings for less than 100 years.  In about 1300, the entire population suddenly vanished. Little is known about their disappearance. Some speculate that the Puebloans were forced to migrate due to drought, crop failure, or depleted resources.

The villages of Mesa Verde were discovered in 1874 and, unfortunately, were pillaged before becoming protected under the Federal Antiquities Act in 1906.  Today, the park’s mission is to research and share knowledge of the Mesa Verde villages and to ensure its preservation for the future.

Mesa Verde is open year round.  However, many sites, such as the cliff dwellings, are only accessible by a park ranger tour.  Often, these tours only operate at certain times of the year so it is important to check the timeframe and availability of tours before arriving at the park.

There are two airports located near Mesa Verde : Cortez Municipal Airport in Cortez and  La Plata County Airport in Durango.

It is also important to note that a car is required to access Mesa Verde National Park.  Once visitors have reached the park entrance, the drive to the nearest cliff dwelling is approximately 21 miles.