The thirst for agriculture has created an incomparable landscape 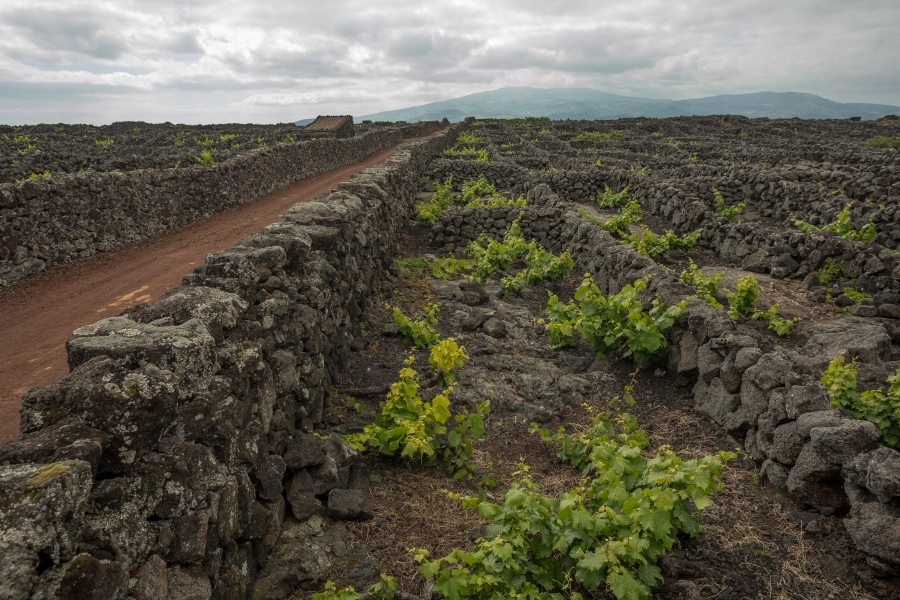 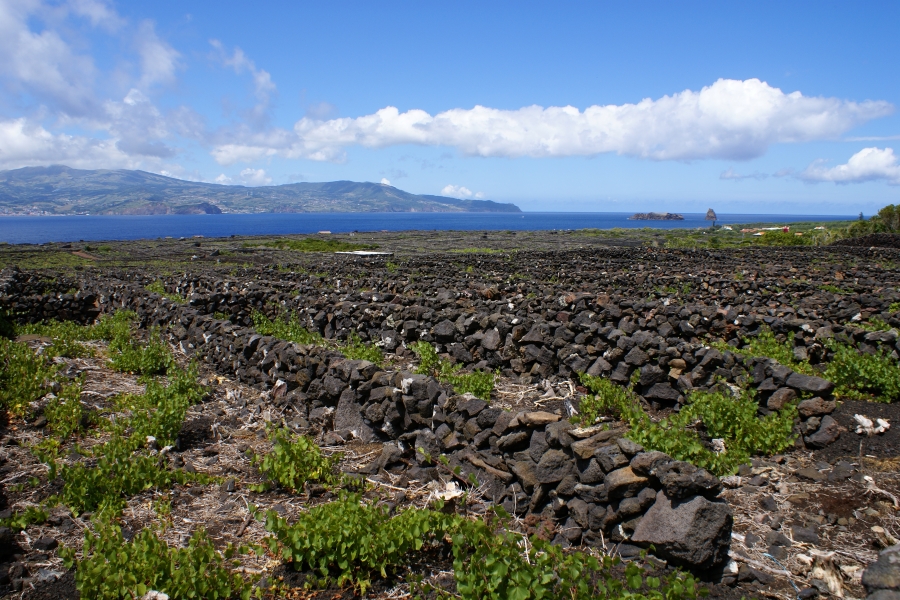 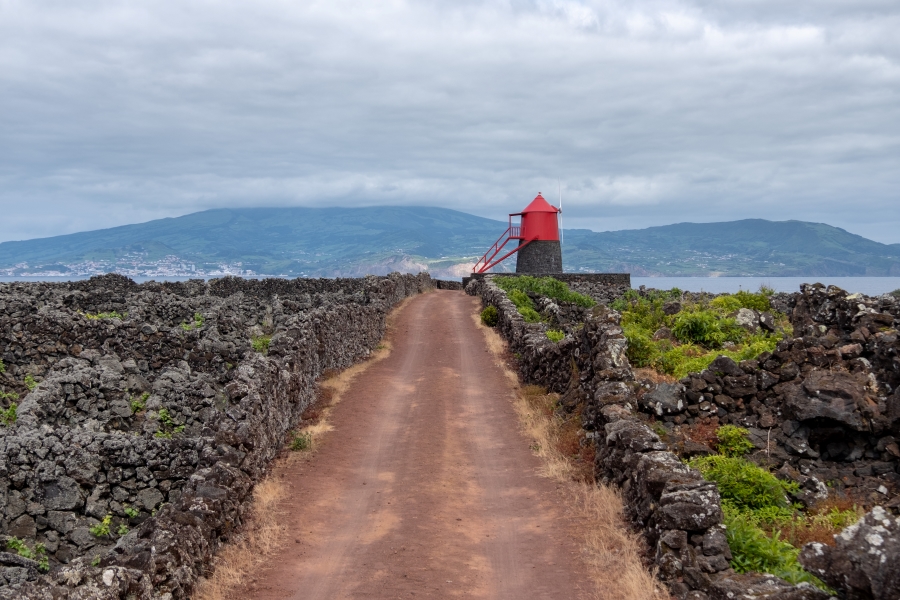 Pico is 987 hectares of unique, man-made landscape, a volcanic island in the Azores whose entire landscape has been shaped and changed over five hundred years of small-scale farming. The island is now famed for its vineyards and their much sought-after wine, but there’s more to see and do here. Pico developed a strong whaling industry, which is covered in the Museu dos Baleeiros, and the island is now a popular destination for whale-watchers.
Visit Archo do Cachorro, which is a natural rock formation which resembles a dog’s head, and also the site of the island’s hydro-electric generators.

The Forte de Santa Catarina is a fortification which served to defend the island from corsair and pirate attack, and is the only military structure on the island to have survived to the present day.
Mount Pico, after which the island is named, is Portugal’s highest mountain, and is an inactive volcano whose last eruption was in 1720. Several hiking trails are available, and the summit is easily reached within four hours from the trailhead.

Torres Cave, another remnant of Pico’s volcanic past, is Portugal’s largest lava cave and is riddled with spectacularly complex rock formations as hundreds of years of lava expulsions have carved their way to the surface.
And, of course, the vineyards! Cared for by Carmelite and Franciscan monks, protected from the wind by the centuries-old walls, retained in individual squares of land, the vines produce sweet grapes. If all the walls of Pico were stretched end to end they would reach around the entirety of the equator, and no mortar has been used in their construction.

Pico’s most staggering feature is the manmade warren of vineyards which run along the coastline south of the island’s capital, Madalena. Constructed from chunks of volcanic rock, these walls are so precisely fitted together that no mortar was used, and they serve two purposes: not only do they protect the fragile vines and fruit from the elements, but the little square enclosures trap the sun’s warmth and allow the fruit to absorb it. The vines grow and attach themselves to the walls – there is no need to offer additional support. Only three grapes are grown on Pico, and expanding the vineyards is out of the question – once you have run out of island, that’s that. As a result, Pico’s produce is highly sought-after, and production cannot be increased.

The determination to make something grow on the fairly inhospitable island has created a completely unique and incomparable landscape. In the winter the walls become clear to see, partitioned into square plots of land called currais. During the warmer months the currais are overflowing with vine leaves, transforming the view and making a farmer’s nightmare look lush and verdant.

People visit Pico from around the world for the Whale-watching opportunities. Whaling used to be the island’s primary source of income, but once it was banned in 1984 it quickly became apparent that Pico is a great place to get closer to these magnificent creatures and watch them in their natural habitat. The Azores are home to Sperm whales, Common dolphins and Bottlenose dolphins, and between February and March the plankton bloom draws Baleen whales, Fin whales, Sei whales, and even the Blue whale, the planet’s largest mammal. In total over twenty cetacean species live in the Azores, so your odds of spotting at least one of them are extraordinarily high.

More in-depth information on Pico’s history, including both its whaling history and that of the vineyards, can be found at the Pico Museum. This encompasses three smaller buildings: the Museu dos Baleeiros, in Lajes Do Pico, a museum of the island’s whaling history built on former boathouses; São Roque’s Whaling Industry Museum is in a former transformation factory and houses a collection of related machinery and products; and the Wine Museum in Madalena, which centres on the island’s wine-producing history and the process of winemaking itself.

Also in Lajes Do Pico is the Forte de Santa Catarina, the island’s only surviving example of military architecture. In 1574, Portugese law determined that cities, towns and sea ports must sell gunpowder and other munitions, and construct guard posts – pirates and privateers were a serious problem at the time, and ships bearing valuable goods from around the world were often boarded and raided. Once the Peninsular War broke out, many of these outposts were upgraded to or with other fortifications, and the Forte de Santa Catarina grew to be able to house seven gunboats. Eventually it fell to ruin, however, and has undergone extensive restoration, opening to the public in 2006. It now houses entertainment areas, an amphitheatre, and offers regional produce for sale.

The centre of the island is Mount Pico, popular with hikers, and with several trails to the top. From the base it’s a full twenty-four hour climb, but can be done in four from the trailhead. There are guides aplenty, and climbing the mountain without one requires climbers to register for a GPS tag so that rangers can find anyone who goes amiss. The climb is challenging, as the surface is rocky and the weather changeable, but the views from the top are breath-taking on a clear day.

Pico was originally used to farm herds, but in 1460 settlers came from the north of Portugal and founded small villages. While the early settlers attempted to cultivate wheat for food and lichens for dyes, it soon became apparent that the soil was nutrient-rich and excellent for cultivating grapes.

The weather, and the Azores’ unprotected exposure to it, began to pose a major problem, so Pico’s distinctive walled vineyards were developed, protecting the precious vines from sea and storms while helping them capture the sunlight. For over two hundred years the Verdelho wine the island produced was highly prized across Europe and Russia, but tragedy struck in the mid-19th Century. Many vineyards were destroyed by the spread of both phylloxera and powdery mildew, and took half a century to recover.

During this slump, the island needed other income, and it came in the form of American whaling vessels. Whaling had been taking place in the Azores since the end of the 18th Century, but with the drop in grape production the island catered to the whalers quickly, establishing docks, shipbuilding facilities, and processing factories.

Wine-making began to flourish again at the start of the 20th Century, and coexisted with the whaling industry until whaling was outlawed in 1980. Pico remains ever-flexible, though, and swiftly adapted to the new laws, transforming itself yet again into a fantastic destination for whale and dolphin-watchers from around the world.

The last major eruption of Mount Pico was in 1720, but the volcano is by no means dead, exhibiting minor volcanic eruptions as recently as 1963, but that event was off-shore, underwater. The volcano has irregular emissions of gas from cracks in a few particular spots. There are frequent seismic events in the area, but the majority have their epicentre several kilometres away from Pico, and the intensity is low by the time they reach the island.

As well as winemaking, whaling and the occasional eruption, Pico has also had to contend with piracy and the effects of Portugal’s involvement in the Restoration, Napoleonic and Peninsular Wars. Raiders frequently descended on the islands of the Azores to take supplies and slaves, and laws requiring towns to carry arms and armour in stock at all times soon meant that many ports became militarised. When Portugal was taken by the Spanish in the 16th Century, the Azores islands resisted King Philip II of Spain’s attempts to control them, only succumbing when he sent his combined Iberian fleet to wage war on them. Pico and the other islands returned to Portuguese control in 1640 through a swift and well-timed revolt on the mainland – with Spain’s armies dedicated to the Thirty Years’ War in Central Europe, Pico transitioned back to Portuguese ownership without the island enduring any military action.

When this led into the Restoration War, and from there to the Napoleonic and Peninsular wars, the militarisation of towns saw the building of many outposts and storerooms, as well as a fort, but after the 19th Century all fell into disuse as the region stabilised.

Now Pico island is a haven for wildlife and tourists alike, and in 2012 won the QualityCoast Gold Award for sustainable tourism.

Flights to Madalena leave Lisbon, Ponta Delgada, Terceira, and Faial daily. Most fly to Ponta Delgada or Faial and connect onward to Madalena, but it’s also possible to reach Pico by ferry from Horta on Faial.

There is a bus which circumnavigates the whole island, Monday to Saturday, setting out from the Ferry Dock at Madalena at 08:45 and travelling clockwise, returning to Madalena at 15:00.

Taxis are available, and reasonably-priced.

Car hire is available from the Airport.

Drivers on Pico Island are not exactly slow or attentive, so be extremely careful whether you are driving or walking – the locals are very happy to drive through narrow cobbled streets as though they were part of a Rally Stage.
Public restroom facilities at tourist attractions are excellent.

Cafes and restaurants are plentiful in towns, particularly near waterfront areas.

Most attractions are closed on Mondays and during lunch hours.