A true marvel of Roman engineering 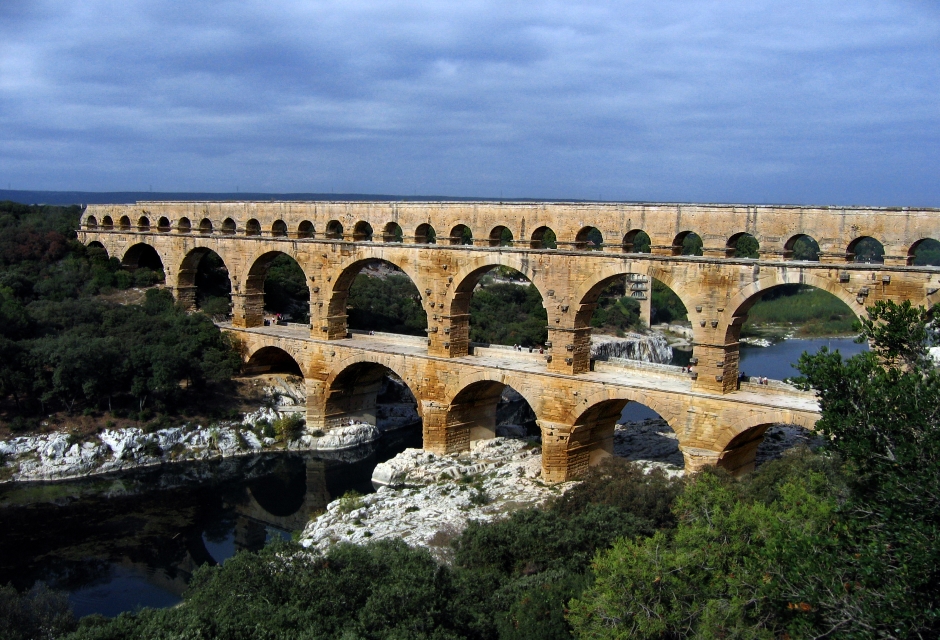 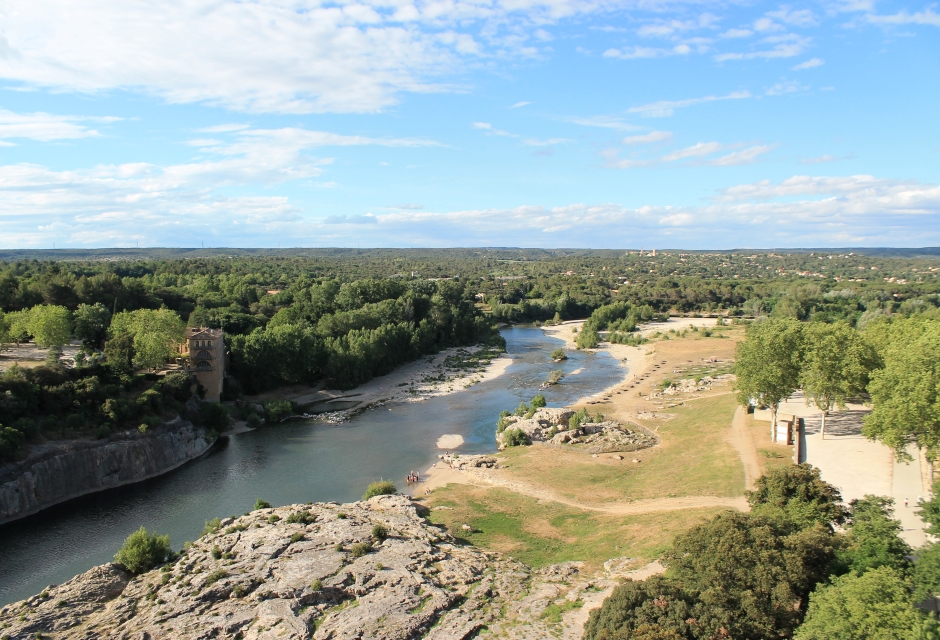 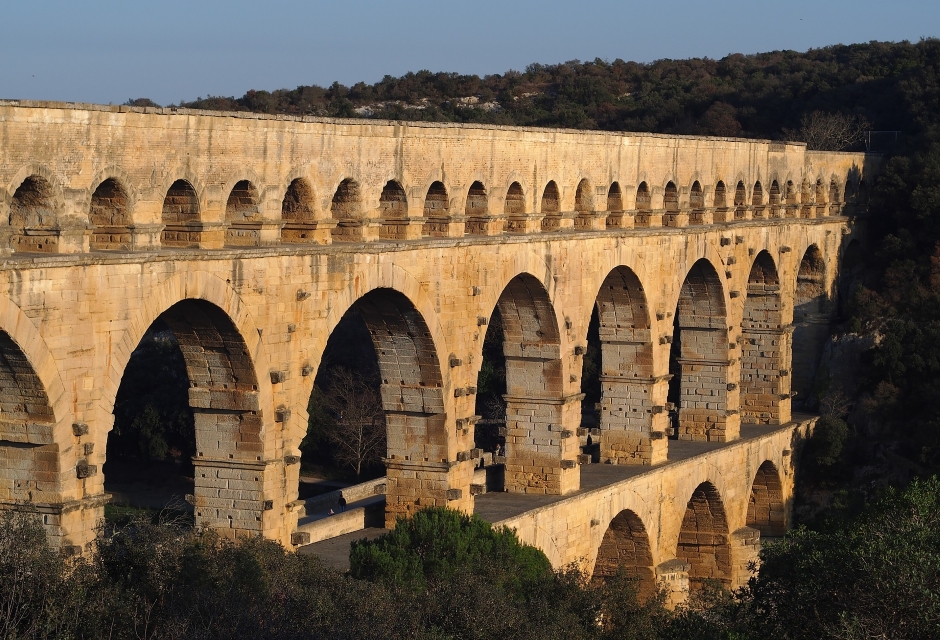 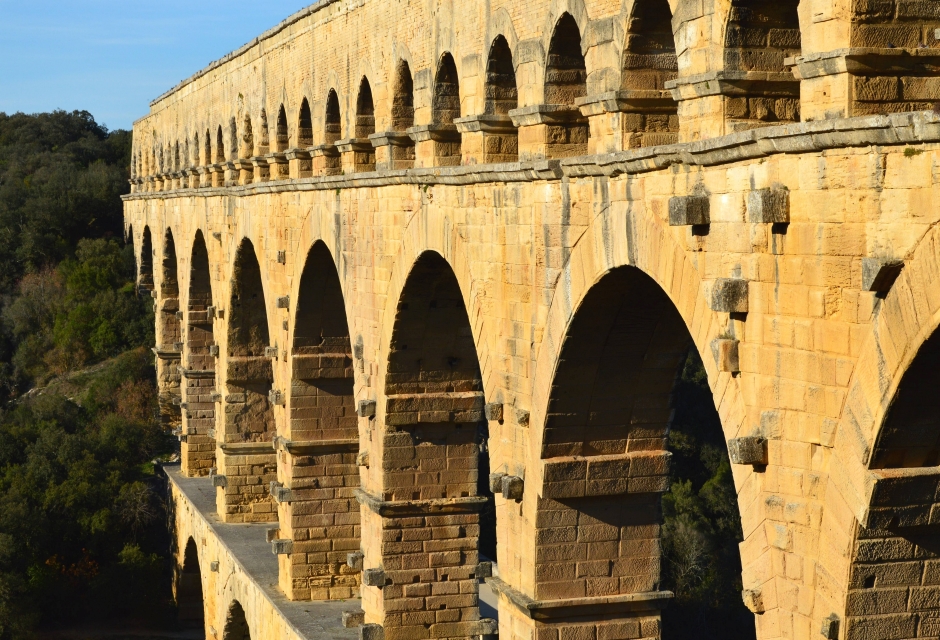 Located about 25 km (15 miles) from the city of Nimes, the Pont du Gard is an ancient Roman aqueduct bridge that was built around the year 50 A.D. It served as part of a system that transported water from the Eure spring, located near Uzes, to Nimes. Attracting more than 1.2 million visitors a year, Pont du Gard stands as a true marvel of early engineering, earning a place on the UNESCO World Heritage list in 1985.

The Pont du Gard includes three levels of magnificently formed arches. The arches are recessed and the main piers are all in line with each other. The first level has six (6) 22- meter-high (72 feet) arches, the second level contains eleven (11) 20-meter-high (65 feet) arches, and the highest level includes 35 arches that are 7 meters (22 feet) high. The water was carried at the top of the third level.

Some 50,000 tons of stone were used in the construction of the bridge, and visitors will note that – for the most part – mortar and clamps were not used. Unlike the rough exterior walls, the interior of the water conduit was smooth so that the water flowed as quickly and easily as possible.

Today, long after the waters have ceased to flow, Pont du Gard is regarded as a thing of great beauty and more than a million visitors arrive each year to snap its photo. In 1996, tourism got a boost when the area was totally pedestrianized and the local government built a visitor center on the premises. The visitor center includes a multimedia exhibit on the history of the aqueduct and a big screen film about Pont du Gard in particular. Nearby trails also allow visitors to explore the area around the bridge and view remains of the aqueduct. Restaurants and shops are offered as well.

The construction of the Roman aqueduct that carried water to Nimes began somewhere around the years 40-60 A.D. and is credited to Marcus Vipsanius Aggripas, the son-in-law of the Emperor Augustus. Historians suggest that it took some 1,000 workers to build the aqueduct and believe the work was completed in about 15 years. When finished, it was an example of the power of the Romans as well as a tribute to the prowess of the engineers of the time period.

Records indicate that the Pont du Gard and the rest of the aqueduct most likely fell into disrepair by the 4th century, probably due to multiple invasions during that era. As a result, debris clogged the waterway and lessened the flow of water. Furthermore, deposits formed and the water became less than clean. However, indications are that the aqueduct was, nonetheless, used until somewhere around the 9th century.

A few centuries later, Pont du Gard was put to use as a toll bridge – a convenient way to collect some extra money. The tolls also allowed the bridge to be maintained; hence, the bridge remained in relatively good condition after that time. However, when the bridge was used to transport artillery in the 1620s, damaged ensued.

As a result, the original bridge was repaired in 1702 and another bridge was built next to the arches on the lower level specifically to accommodate foot traffic. But by the 1800s, erosion and wear-and-tear put the bridge in danger of collapsing. Napoleon III ordered its repair in 1855 and stairs were installed at one end.

Since that time, the bridge has been the victim of numerous floods and more age-related issues. Nevertheless, it remains one of the most marvelous examples of early engineering and is still included on the itinerary of many visitors who are exploring southern France.

Visitors may explore the Pont du Gard area on their own or may visit the museum and book a guided tour. Tours last for 90 minutes and take visitors all the way up to the top level of the bridge. A 7 km (4 mile) walk also lets guests explore the remains of the aqueduct. There’s also an area of the museum – Ludo – where kids can explore and have fun at their own pace.

One fee includes access to the museum, the walking paths, picnic area, free events, and the open air exhibit known as Memoires de Garrigue. There is a separate fee for guided tours and Ludo.

Pont du Gard is open year round but the so-called discovery areas are closed on Mondays and from November through March.

Visitors may catch the TGV train from Paris (Gare de Lyon station) to Nimes, which takes just under 3 hours. The closest airports are Nimes and Avignon. Flights leave Paris’s Orly West several times a day. Driving distance from Paris to Nimes is 359 miles or about 7-8 hours via the A6 Autoroute, depending on traffic.