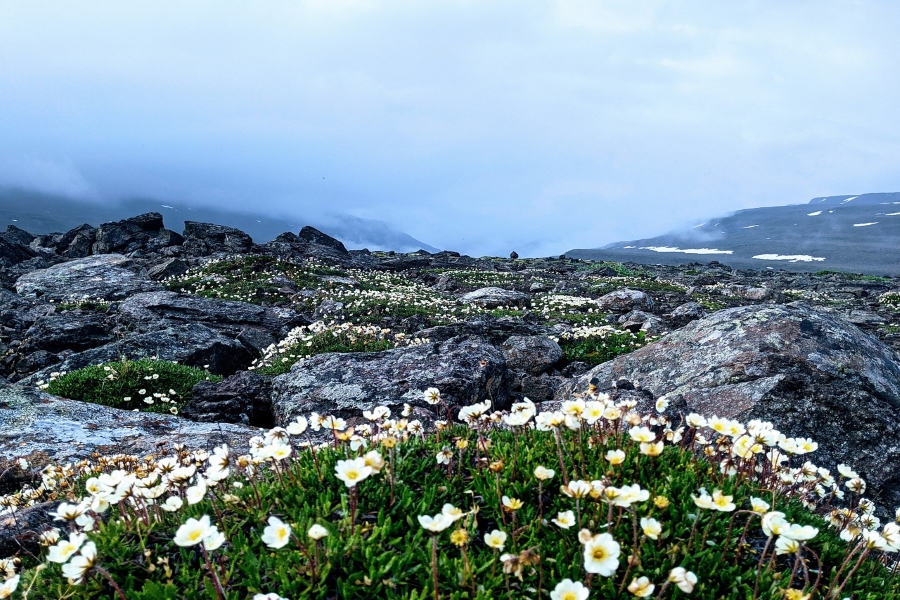 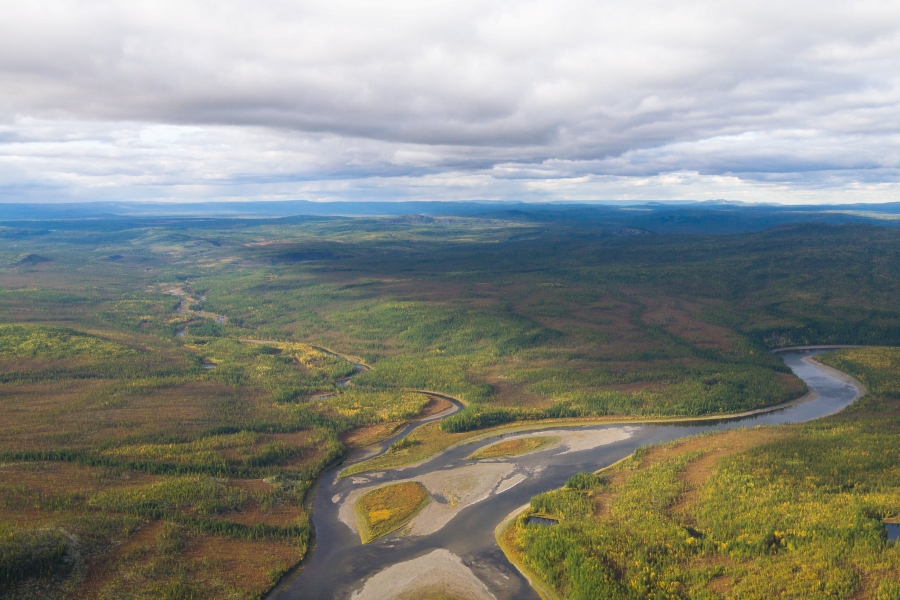 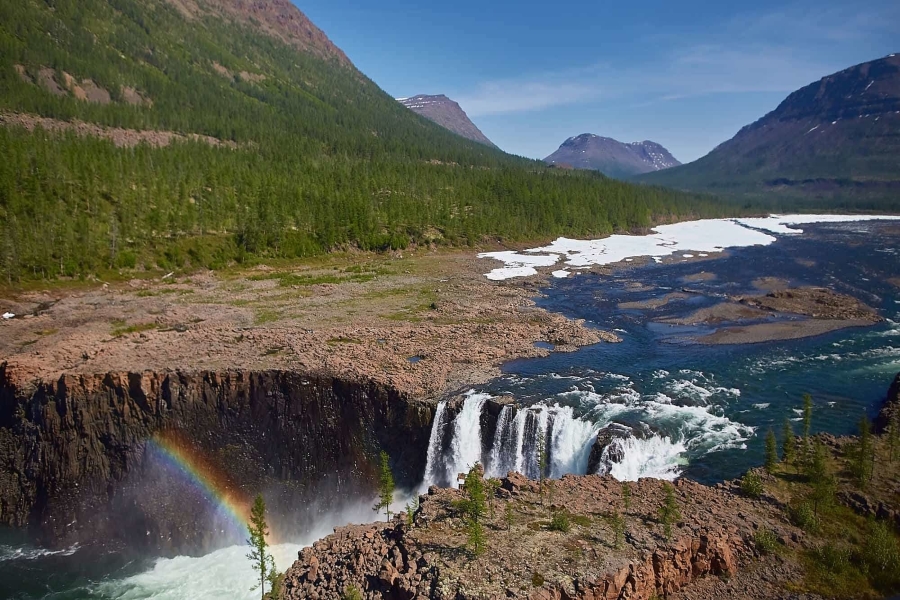 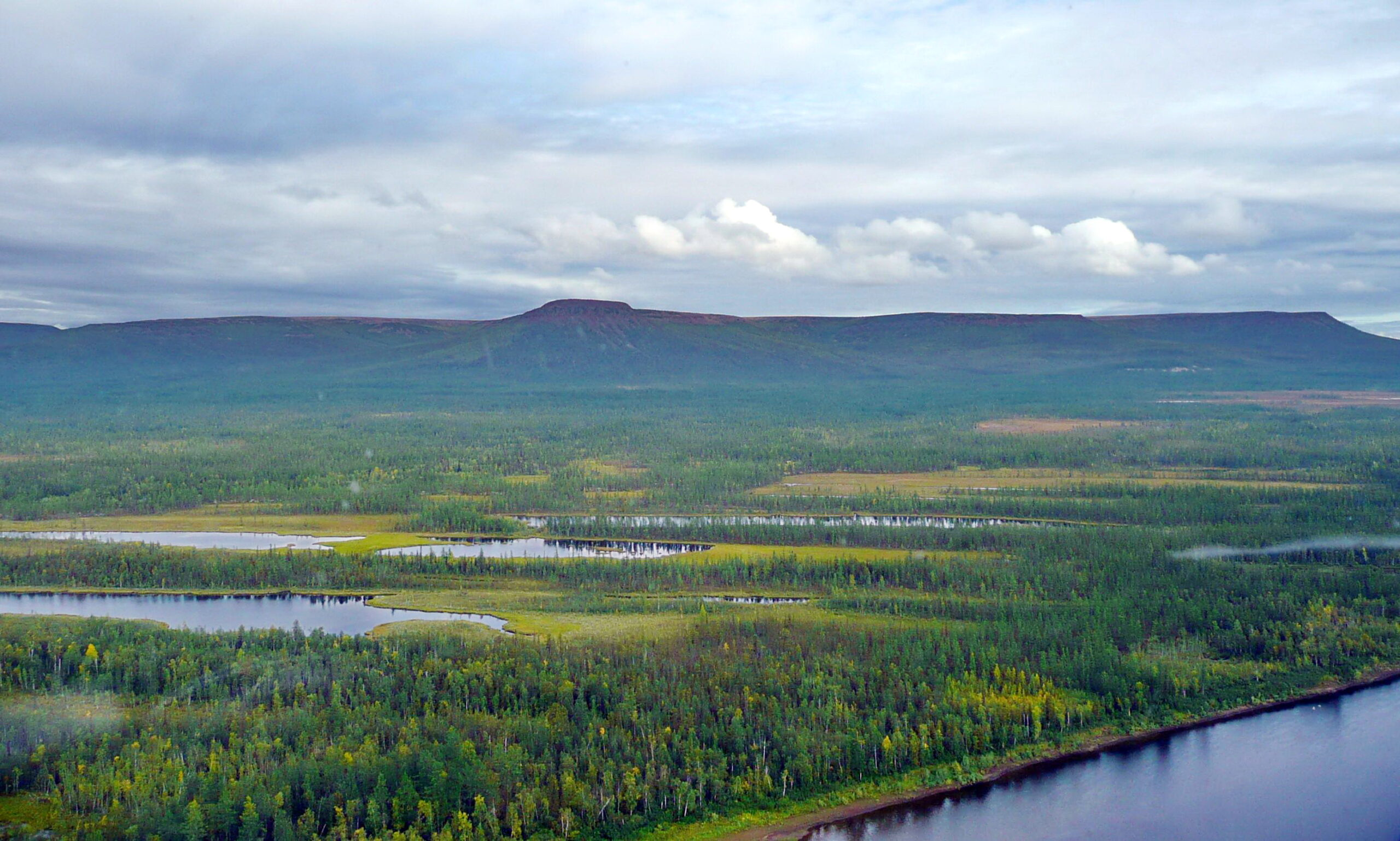 Introduction to the Putorana Plateau

The Putorana Plateau is an enormous basalt tableland massif that stands at the northwestern edge of the Central Siberian Plateau approximately 100 kilometers north of the Arctic Circle. The World Heritage inscribed area which measures 1,887,251 hectares, exemplifies the paradoxical conditions of unspoilt ecosystems in the arctic and subarctic regions. These ancient lava traps cover the center and most of the area within the Putoransky State Nature Reserve (zapovednik) and except for the southern part of the plateau, a buffer zone of 1.77 million hectares surrounds the site, comprising of even more rivers and bigger lakes.

Putorana’s landscape is a maze of remote trappean reliefs cut by deep and tortuous river valleys in between, and camouflaged by splotches of blue, green and brown marshlands, a thriving green taiga, tundra, forest tundra and thousands of blue lakes. More than 25,000 lakes within the Plateau’s area accumulatively make up Russia’s second-largest freshwater reservoir next to Lake Baikal. Among its significant sweet water reserves are lakes Ayan, Kutaramakan, Dyupkun, Kharpicha and Sobach’e, and the rivers Kureika, Yagtali, Kotuy, Ayan and Irkinda.

Fishing along shallow river banks is fast becoming the attraction for anglers near and far. The rivers and lakes are teeming with freshwater catch such as the Hucho taimen, grayling, lenok, pike, Arctic charr, burbot, whitefish and many others.

Visits to Putorana Plateau begins with an air reconnaissance of the reserve. Guests can marvel at the spectacular view of the traps from above or take snaps and record the scenery on video. After the helicopter tour, travelers are usually led to a base camp where they can rest and fish to their hearts’ content before setting out to hike or raft.

The highest point in Putorana, the Kamen’ Mountain, can be found at its eastern border, rising up to 1,701 meters above sea level. West of Kamen and at center of the reserve is the Ayan river valley where a few tributaries from north, east, west and south into the flowing pool that is Lake Ayan. Waterfalls are also a common sight in the reserve and the highest is Talnikovsky waterfall – which drops waters at 482 meters. Putorana holds the highest concentration of waterfalls in all of Russia

The most visited spots of the reserve are the lakes and rivers in the west, southwest and south boundaries. While most of these bodies of water and hiking areas are not within the reserve itself, the ones at the western end are still part of the buffer zone. Among the largest lakes in Putorana’s western buffer zone are lakes Lama, Keta and Khantaskoye. Smaller yet equally significant lakes such as lakes Glubokoye, Nyeralat, Sobach’e, Nakomyaken and Kutaramakan are scattered in between the bigger ones.

Rivers which are at the southern edge of the zapovednik’s boundary such as Irkinda, Kureika, Yaktuli and Delochi, and lakes Dyupkun and Kharpicha are becoming known as fishing grounds in the Putorana region. The same goes for tributaries to DownTunguska river which can be found further south of the reserve including rivers Erachimo, Nimde, Tutonchana and Vivi, and the crack lakes of Severnaya (or Severnoye), Agata, Nyakshinda, and Vivi. Lake Vivi lies directly south of the tablelands and is more popularly known as the geographical center of Russia.

The Putorana Plateau is the second largest trappean land formation next to the Deccan Plateau of India. Both plateaus have similar topography and creation wherein basaltic lava formed and covered the layers of the plateaus throughout time and syneclises raised the traps while the rest of the platform steadily declined.

The elevation of the Putorana Plateau began in the Permian period (estimated at 250 million years ago) accompanied with lava outpours and explosions which repeatedly spewed from the Earth’s crust. The cooled lava concealed the Paleozoic soil and filled the depression that were brought about by the Tunguska syneclise.

However in the early Tertiary period, the elevation changed drastically in the northwestern region of the Central Siberian Platform as the northern edge of the Tunguska syneclise elevated much faster than the rest of the Siberian platform.

The rise of the lava plateau consequently caused basalt cracks creating deep lakes and changed the course of old rivers. The old river valleys were a kilometer deeper than before and which originally flowed south now turned east, west and north. The tectonic change also brought the disappearance of old lakes and appearance of new ones in different places. Up to date, tectonic activity is still at work as the plateaus continue to rise by 11mm per annum.

The Putorana Plateau is within the boundaries of Taymyrskiy (Dolgano-Nenetsky) and Evenki Autonomous Districts in Krasnoyarsk Krai, a Russian federal subject west of Yakutia (Sakha Republic), bounded by the Sayan Mountains on the south and stretches northwest of Irkutsk Oblast.

To get to Putorana Plateau, travelers need to pass through Krasnoyarsk city. The Yemelyanovo International Airport in Krasnoyarsk serves as a major airport in the Krai and has flights to and from Russia’s major cities and a few select cities in Asia, the Middle East and Europe.

Before going into the Putorana Plateau reserve, travelers must choose a place where they could board a helicopter to the site. So far, there are three documented places where helicopter services to the zapovednik are available:

1) Norilsk – The nearest city to the site is the mining city of Norilsk, the world’s farthest city in the north, which lies some 200 kms west of the basalt plateaus. Aside from Krasnoyarsk city, Norilsk also has direct flights to and from Moscow, St. Petersburg and Yekaterinburg. However, Norilsk is a closed city for tourists (with the exception of the people of Belarus) and entry to the city is either by invitation or special permit. It is also good to take note that Norilsk is currently a source of toxic pollution within its area although the plateaus are well away and secluded from the polluted city’s reach. Travel time from Moscow to Norilsk takes three and 50 minutes and the helicopter ride from Norilsk is an hour’s ride to a base on the shore of Lake Keta.

2) Turukhansk town in Turukhansky district – Turukhansk lies southwest of the Putorana Plateau and is situated where the great Siberian river, the Yenisei, and Lower Tunguska river converge. From Krasnoyarsk, a plane ride would take two hours and 40 minutes to get to Turukhansk. The town is closer to rivers Severnaya, Erachimo, Nimde, Tutonchana and Vivi—all tributaries of the Lower Tunguska river.

3) Tura village in Evenki district – A plane ride from Krasnoyarsk to Tura takes two hours and 20 minutes. Helicopter services will take travelers to several landing sites south of the zapovednik, one of which is Lake Delochi, where the tourists can camp, hike and raft from there to other lakes in the area. Tura is southeast of the plateaus and Lake Vivi, where the geographical center of Russia can be found.

Anglers and nature trippers wanting to access Putorana Plateau must remember that its remoteness is intended for and essential to the preservation of the zapovednik. This is the main reason why there are no land infrastructure leading to the site and the only way to access it is to travel by air via helicopter (even this is regulated) or explore its winding river valleys via a raft or a boat. Parts of the reserve that are inaccessible via water can only be travelled on foot.

Aside from base camps, Putorana travelers who set out to hike, camp and raft ought to be prepared for total wilderness during their expedition. The plateau’s rugged terrain have barely been toured ever since its first discovery in 1921 so tourists cannot make this trip without local guides or scientists who have a certain level of knowledge about the area.

Before making this journey, tourists also need to prepare documents ahead of time. Permits to visit specific parts of Putorana Plateau zapovednik and Norilsk (if they choose this route) are the most important. Anglers and hunters will need permits to fish and hunt although touring agencies might already include these in their offered packages. Security and emergency communications within the plateau and outside include handheld transceivers and satellite phones. Travelers should not do without their personal medicines, jungle or pocket knife, waterproof clothes and boots, sleeping bags, fishing and hunting gear (some agencies offer these for rent), mosquito nets and insect repellants.