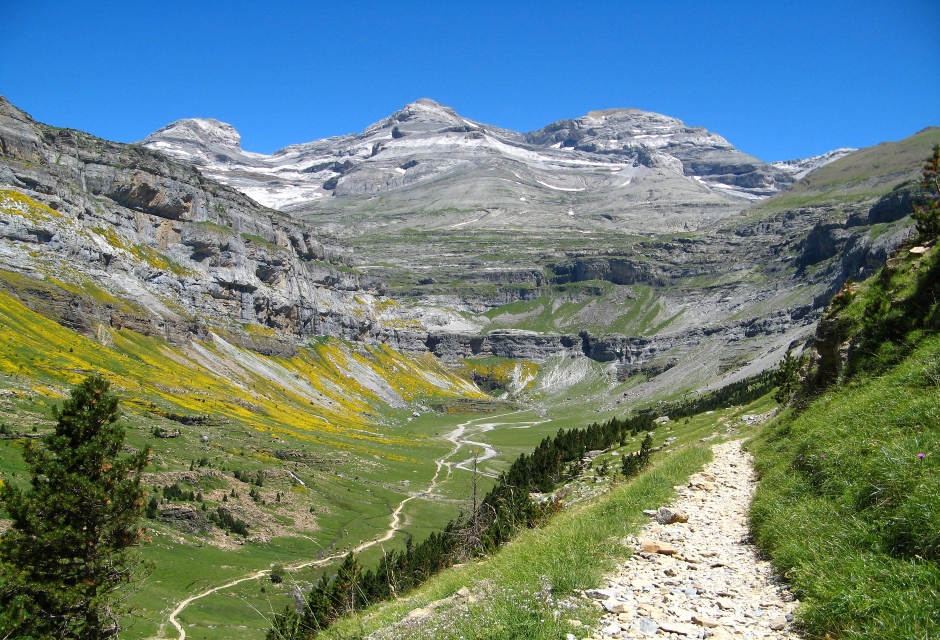 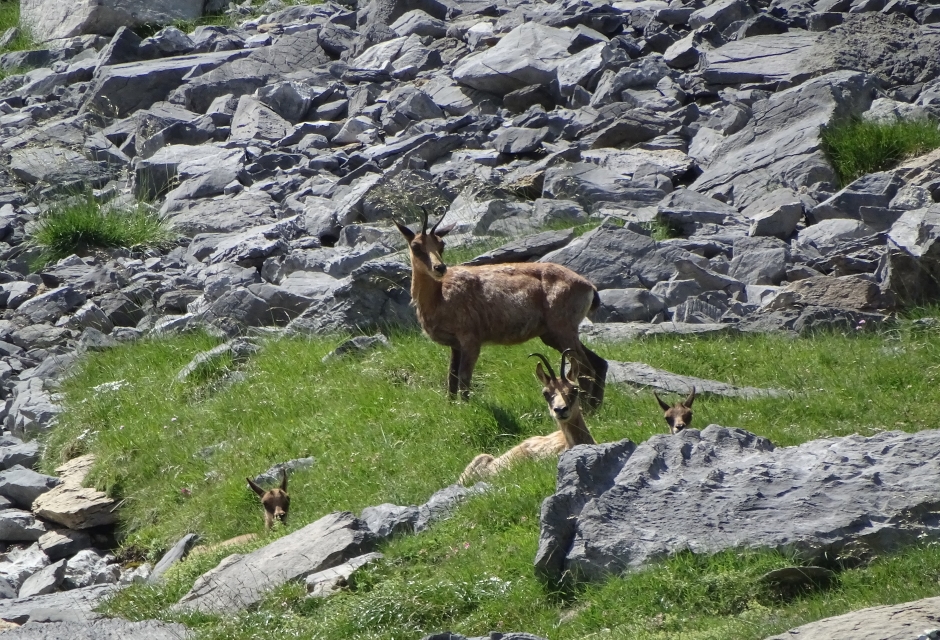 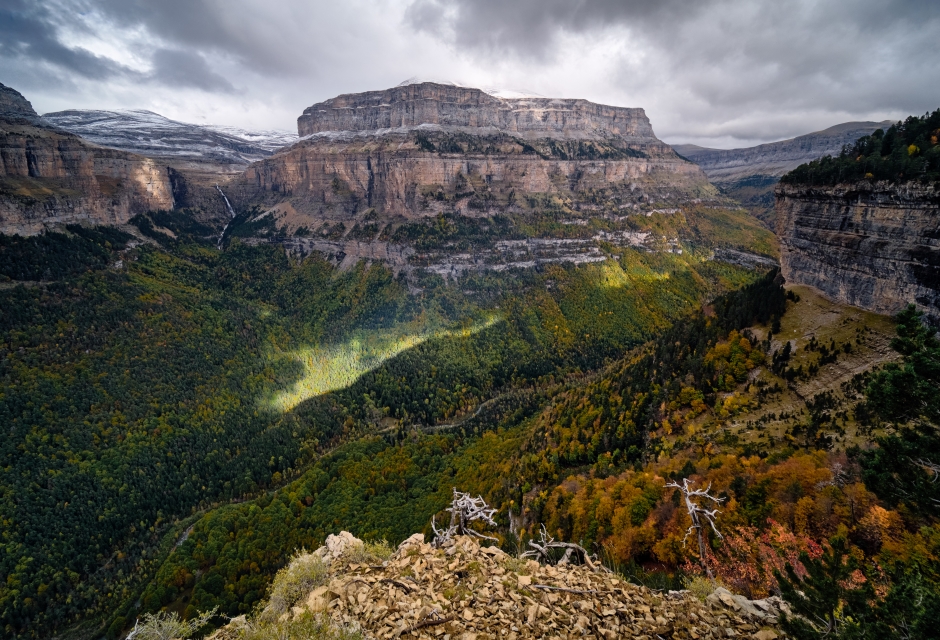 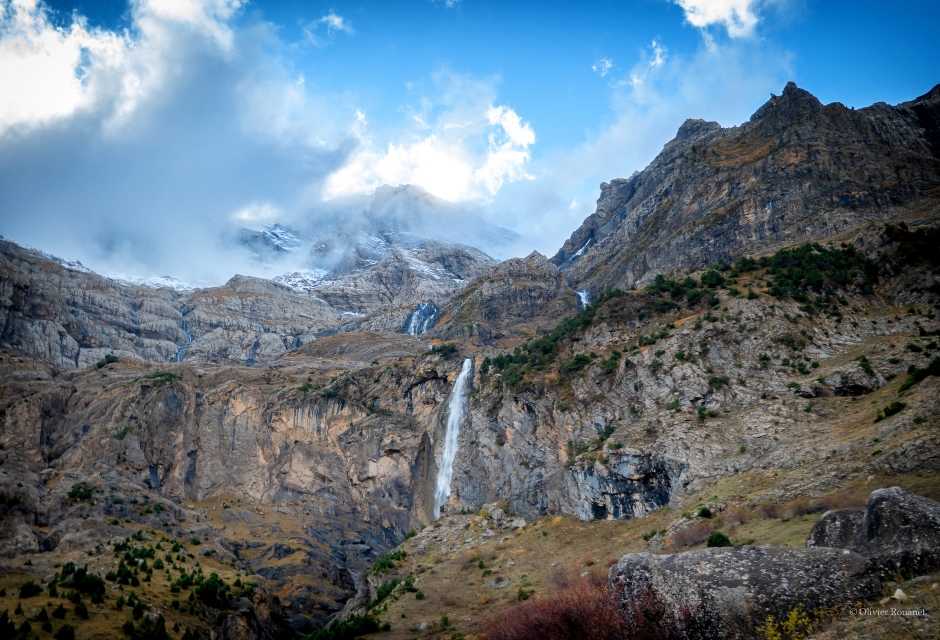 Rising to 3,352 meters (almost 11,000 feet), Mont-Perdu is a calcareous massif (a compact group of mountains forming an independent portion of a range) that spans the borders of France and Spain, part of the mid-Pyrenees Mountains. One of two naturalUNESCO World Heritage Sites in France, Mont-Perdu covers an area of 30,639 hectares (118 square miles) and the landscape is reminiscent of the agricultural way of life once enjoyed in this region of France and Spain.

It is possible to explore parts of the Mont-Perdu region via automobile in Pyrenees National Park though it is not the ideal way to enjoy the area. Hiking is a much better way to get a good look at the area up close, and some of the hikes are not too difficult. For example, visitors can drive to the tourist town of Gavernie and then take a fairly easy walk to the park’s most famous destination, the Cirque de Gavernie, an amazing circular wall of cliffs that provides breathtaking views of the terrain below.

For another leisurely stroll, visitors can walk about 90 minutes from pretty Cauterets to Lake Gaube. The area can also be accessed via a chairlift from Pont d’Espagne. Cauterets is also home to thermal springs – Thermes Cesar – which opened in 1843 and are still in operation. In the winter, there’s plenty of room for skiing as well.

There are a plethora of other hiking trails as well, including a popular one that takes trekkers from Gabas to Pic du Midi d’Ossau. This trail is especially scenic and can get fairly busy during the pleasant weather. Those who prefer not to walk, however, can head to the town of Gabas and the Lac de Fabreges to take the cable car up to Pic de la Sagette, followed by a 10-minute train ride through the mountains. (Summer only)

Exploring the apex of Mont-Perdu is a must for those who enjoy high-energy trekking. The trip, however, is not for the novice. It’s intense though beautiful, but does require excellent physical fitness and a bit of experience as well. But the wide range of flora and fauna is stunning and fascinating and those who make the trip find it to be unforgettable.

There is evidence that humans inhabited the Mont-Perdu portion of the Pyrenees range since about 40,000 B.C. and, indeed, generations of inhabitants have each left their unique mark on the landscape. History shows that ancient cultures on both sides of the mountain seem to have been similar, despite the difference in climate – the French side being humid and the Spanish portion being quite dry.

Originally, nomads roamed the area but soon permanent settlers came and stayed. Evidence shows that these early cultures made good use of the natural resources including the pastures, woodlands, water resources, and minerals found on Mont-Perdu. Artifacts have confirmed the presence of early people in areas such as the Aniscio and Escuain caves and sites like the Gavarnie stone circles.

By the Middle Ages, historians were documenting permanent settlements on the slopes of the mountain, the valleys, and near the rivers that run through the region. Roads, bridges, houses, and more popped up over the centuries and many are still in use. In addition, extensive livestock grazing occurred through the thousands of years since the first inhabitants came, greatly shaping the landscape to what it is today. Herds still move across the French-Spanish border with ease, indicative of the easy communication between the cultures that live on either side of the massif.

Indeed, the French and Spanish that live on Mont-Perdu share many commonalities, and locals note that they have much more in common with each other than they do with their fellow countrymen that live on the plains below them. As a result, the communities there have their own judicial and political systems, separate from the central governments of their countries.

If you are planning on hiking at Mont-Perdu, summer is the best time to do this. Winter is usually treacherous and springtime can be tough as well, depending on the snow melt from the mountains. Summer’s long days and abundant sunshine make for a much safer climb. If you’re going all the way to the summit, you’ll probably want to spend a night at the Goriz Mountain Hut. Reservations are suggested.

Skiing season is fairly long but certainly depends on the weather. Visitors should check dates of operation and skiing conditions at the individual resorts before visiting.