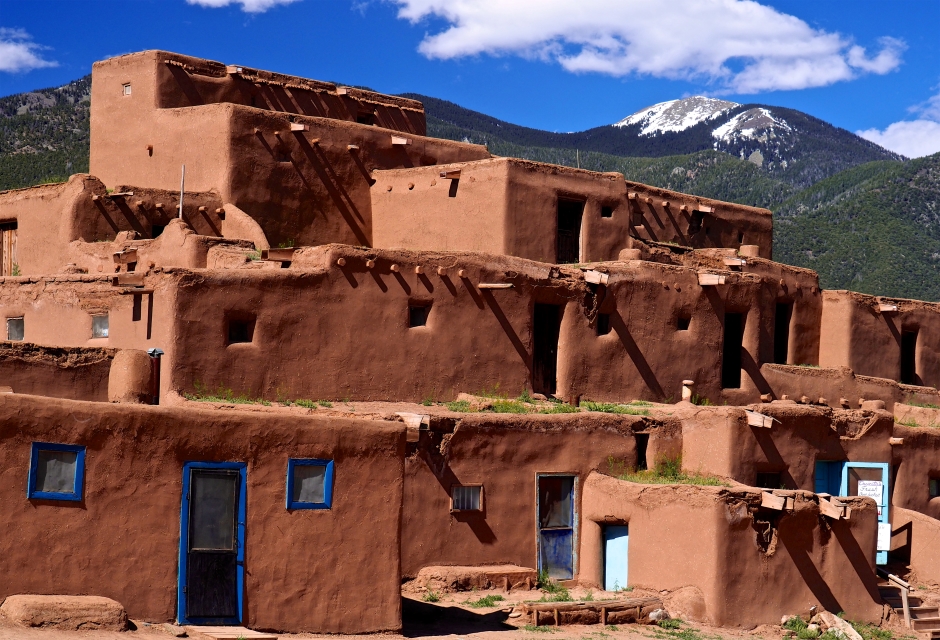 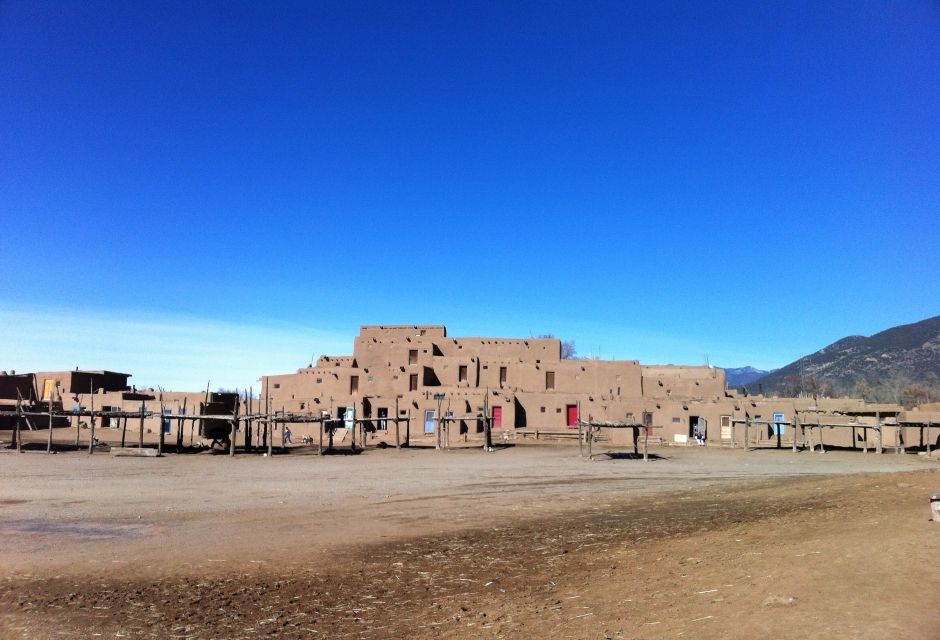 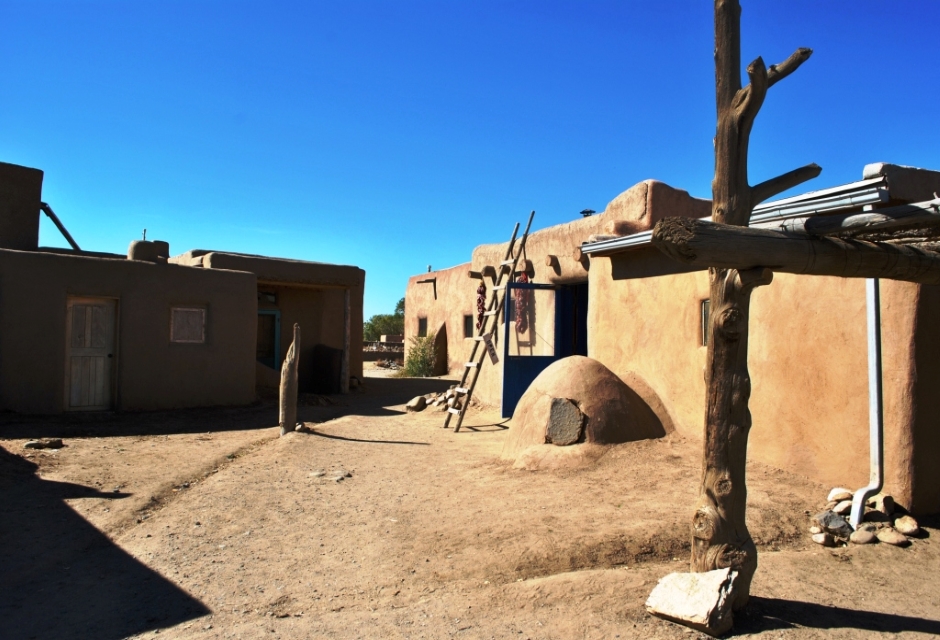 Pueblo de Taos is located in a small valley near the Rio Grande.  This area consists of an adobe settlement that includes many dwellings and ceremonial structures from the Pueblo Indians.  It is highly representative of the culture of these people.  The two structures at Pueblo de Taos, Hlauuma and Hlaukwima, are considered the oldest buildings in the United States to have been continuously inhabited.  These pueblo buildings were made of adobe, a mixture of water and straw that was made into sundried bricks.  Hlauuma and Hlaukwima are side-by-side, and actually consist of many clusters of homes built up in layers.  They are located to the north and south of the Red Willow Creek, respectively. The settlement was first established in the late 1300s and since then, has been inhabited by the Pueblo Indians.  Today, it continues to be a thriving community with an enduring culture.  Approximately 150 people live within the Pueblo on a full-time basis.  Many other families who own homes in the Pueblo have summer homes or more modern homes outside the village but within the Pueblo land.  All together, there are approximately 1900 Indians living within Pueblo de Taos.

Typically, Pueblo de Taos is open to visitors from 8AM to 4:30 PM.  However, the Pueblo is sometimes closed for tribal rituals.  It also is closed for approximately ten weeks from late winter to the early spring.  If you plan to visit during this time, it is wise to call ahead.  The adult fee to enter the community is $10 per person.  In addition, if guests wish to take photo or video, there is a $6 fee per camera.

When visiting Pueblo de Taos, it is important to keep in mind that it is the current residence for many Pueblo Indians.  Some areas are marked as “restricted,” in order to protect the privacy of the residents and areas of religious importance, so visitors must be aware of these signs.  In particular, visitors may not enter the cemetery or the ruins of the old church. While photography is allowed, it is important to report all cameras and pay the appropriate fee.  Out of respect, visitors should not photograph members of the tribe without first asking for their permission.  No photography is permitted in the San Geronimo Chapel.  Lastly, visitors are asked to stay out of the river that runs by the village, as this is the residents’ only source of drinking water.

When visitors arrive at Pueblo de Taos, they can take a walking tour of the Pueblo and observe the Pueblo culture, people, and settlement.  The walking tour begins at the San Geronimo Chapel.  Visitors can then walk to the ruins of the Old San Geronimo Church, which was destroyed in 1847 by the U.S. Army.  The North Pueblo can be viewed, as well as the pueblo plaza, and the South Pueblo.  There are also several shops throughout the pueblo, where natives sell pottery, jewelry, and works made from animal skins.

The Taos community is thought to have appeared before 1400. The Pueblo people who inhabited this area may have been descendents of the prehistoric Anasazi Indian tribes, who declined in the 13th century.  The traditions of the Pueblo people are, therefore, likely derived from the Anasazi.

When the Pueblo culture began to appear, it developed two defining cultural characteristics, which together seem quite contradictory: unchanging traditions and an ability to absorb the customs of other cultures.  These two characteristics are evident from their interactions with Europeans who arrived in the area in the 1500s, just after the first Spanish expedition.  In the 1700s, war and conflicts between the Pueblo and the colonizers arose.  Though there were many attempts to convert the Pueblo to Christianity, the Pueblo resisted.  They did, however, integrate cattle and grain introduced by the Spanish into their agricultural system.  So, while they did remain steadfast in their beliefs, they were able to adopt beneficial aspects of the Spanish culture.

In 1970, the Pueblo people received in restitution the lands which had been sequestered by the American government.  Interestingly, by this time they had assimilated many outsides traditions into their culture, including Christmas ceremonies and Mexican dance.

Pueblo de Taos is located near the city of Taos, in north central New Mexico.

From Albuquerque, take I-25 toward Sante Fe.  Take the exit for 599 north.  Then take Highway 285 to Highway 68 to Taos.  The driving time is approximately 2 hours.

If you are coming from Santa Fe, take Highway 285 to Highway 68 into Taos.

If you are coming from the western side of Texas, take I-40 to Clines Corner, exiting onto Highway 285.  Then take I-25 to Santa Fe, then take Highway 285 to Highway 68 into Taos.