A staggering engineering feat over 2000 years 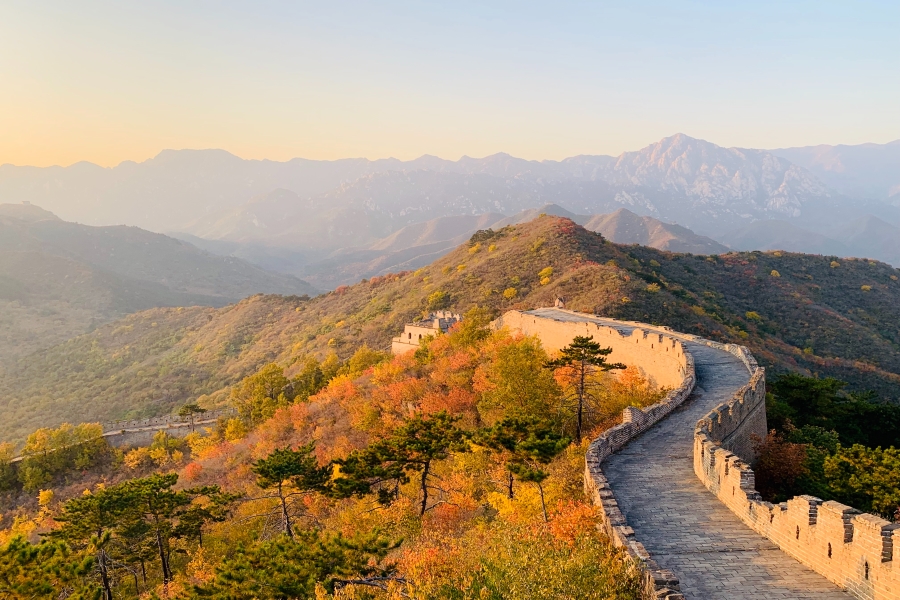 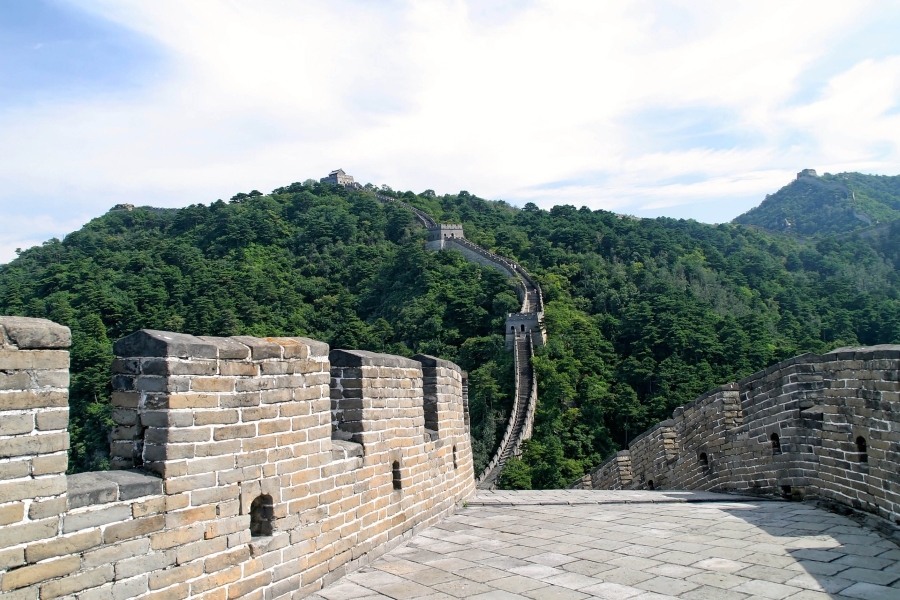 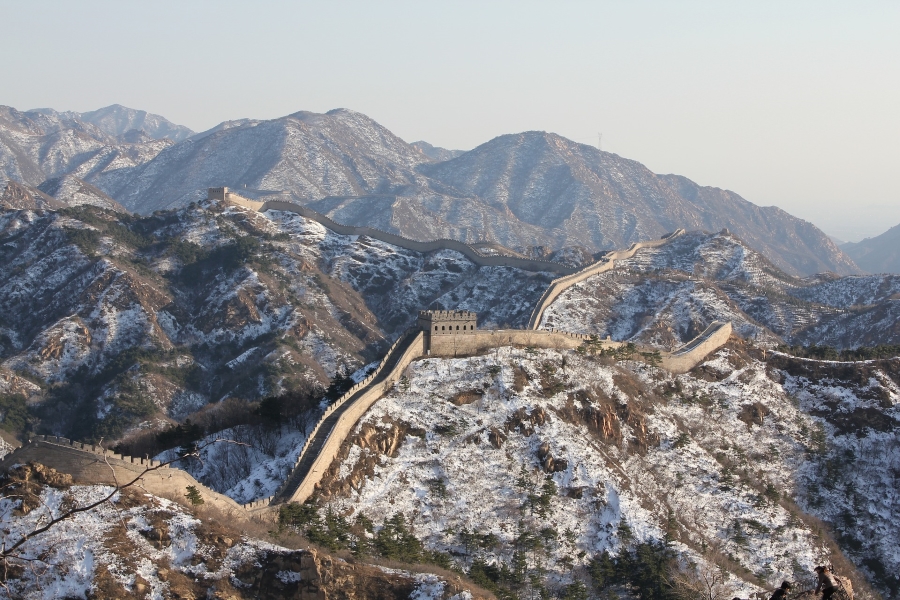 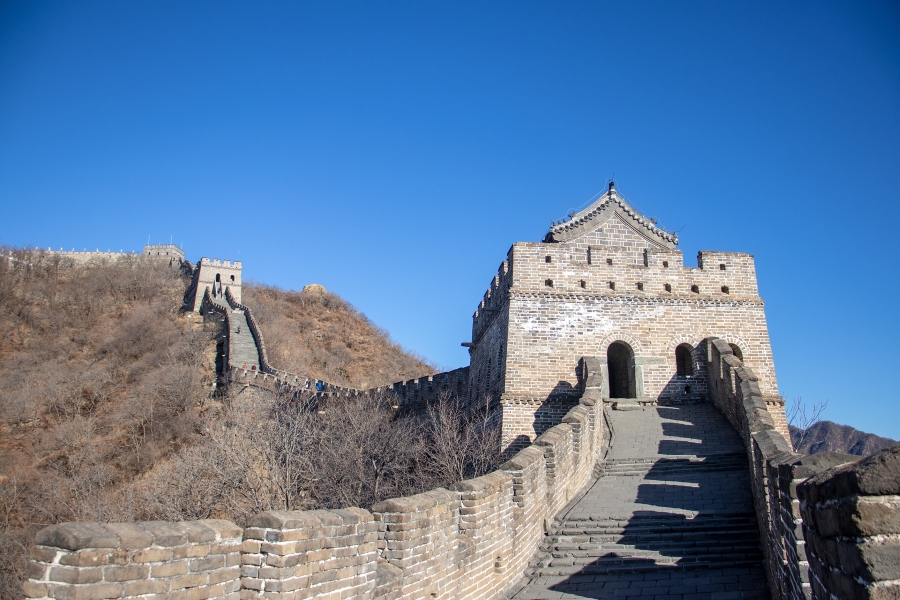 Introduction to The Great Wall of China

The Great Wall literally means “The long wall of 10,000 Li [half a kilometer]” in traditional Chinese. This long, snaking fortification was constructed and rebuilt between the 400s BCE and the 1500s CE in ordor to protect the borders of China in the northern region from invasion. One of the most renowned sections of the wall was constructed between 220-206 BCE by Qin Shi Huang, the first Emperor of China during the Warring States Period. However, much of the remaining sections of the wall were constructed at the time of the Ming Dynasty from 1368-1644 following the collapse of the Yuan Dynasty led by the Mongols. The Wall begins all the way in Shanhaiguan, or Shanhai Pass in Qinhuangdao city in the province of Hebei, in the east to Lop Nur, in the southeastern section of Xinjiang Uygur Autonomous Region. The arc of The Wall actually traces the approximate edge of southern Inner Mongolia. According to an archaeological survey of comprehensive proportions, The Wall is estimated to run for 8,851.8 kilometers with 6,259.6 kilometers of real sections of wall, 359.7 kilometers of trenches, and 2,232.5 kilometers of barriers for natural defense including rivers and hills.

There are certain sections of The Wall that are the most most popular with tourists today, some of which are in the municipality of Beijing. The first of the top three is Badaling, or the North Pass of Juyongguan, which lies approximately 50 kilometers from the city of Beijing in an 18 kilometer-long area called Guangou in Changping County. This section of The Wall is 5 meters wide, 7.8 meters high and composed of bricks and stone from the nearby hills. The second of the top three is the West Pass of the Jiayuguan pass close to the western borders of The Wall. It is situated at the western end close to Jiayuguan city in Gansu province. The third section of the top three locations of The Wall is the “Pass” of Shanhaiguan, or Shanhai Pass, a section of Qunhuangdao city in Hebei province. A major feature of this part is its eastern end of the Ming Dynasty Great Wall’s main line. It also has a popular spot where The Wall encounters the Pacific Ocean at the Bohai Sea called “First Pass Under Heaven” or “Old Dragon’s Head.”

Other more spectacular areas of The Wall is when it climbs sharply up steep mountainsides. At Wangjinglou, one of 67 watchtowers of Jinshanling, it reaches heights of 980 meters above sea level. The Wall in this area stretches 11 kilometers and measure 6 meters at the bottom, 5 to 8 meters in height, and tapering to 5 meters at the top.

The Mutianyu Great Wall is southeast of Jinshanling and snakes across jagged mountains for about 2.25 kilometers from the southeast to the northwest. This part links with Gubeikou to the east and Juyongguan Pass to the west. It is about 70 kilometers northeast of Beijing in Huairou County. It is known for being one of the best maintained sections of The Wall and was formerly a barrier that would protect the imperial tombs as well as the capital.

A shorter section of The Wall, only 2-3 stories high, is located 25 kilometers west of Liao Tian Ling. This portion of The Wall appears to be made of silver because the stone that it was made with is from Shan Xi, which has a high concentration of metal resulting in its silver appearance. Unfortunately, due to decay and erosion, the silver parts of The Wall are difficult to see today.

Another prominent section of The Wall is at its eastern extremities at the point where the Shanhaiguan or “Number One Pass Under Heaven” was built. This is also where The Wall climbs its first mountain. The only sections of The Wall that were constructed as a bridge, Jiumenkou, is located here. The Meng Jiang-Nyu Temple is located here, which is where the Shanhaiguan Great Wall gets its name “Museum of the Construction of the Great Wall.” This part was constructed at the time of the Song Dynasty who ruled from 960-1279.

During the Spring and Autumn Period starting in the 700s BCE, correlating approximately to the first half of the Eastern Zhou dynasty, the Chinese people were already acquainted with wall constructing techniques. The purpose of The Wall in its early days of construction was to fortify the Yan, Qi and Zhao states from enemy attack at the time of the Warring States Period. Under Qin Shi Huang, all of the warring states were unified into one nation of China in 221 BCE, thereby beginning the Qin Dynasty which lasted until 206 BCE. This emperor had the older sections of the wall that separated the previous state boundaries demolished in order to emphasize his amalgamated rule and avoid the revival of feudal lords. Under Qin Shi Huang, new sections of the wall were constructed to link the enduring wall fortifications at the new northern frontier of the Chinese Empire. For practical reasons, the materials that compose the wall were gathered from local sources. For example, for sections of the wall that crossed mountain ranges, stones from that mountain were extracted. For sections of the wall that spanned planes areas, rammed earth was utilized in construction. This ancient rammed earth method used gravel, chalk, and lime in their raw forms. Regrettably, there are limited sections of these ancient walls remaining today due to erosion over the years. The Northern,Jin, Song, and Han dynasties later rebuilt, repaired, or created new strips of wall to defend their northern borders from invasion as well.

There are many tour operators providing transportation to The Wall. Many include a trip to the Ming Tombs, gem exhibition halls or jade factories. The closest sections of the wall to Beijing are at Badaling and Juyongguan but are also the most crowded. Less crowded but slightly further away from Beijing is Mutianyu. It is also possible to hike 10 kilometers from Jinshanling to Simatai. Private cars and drivers can be hired from Beijing to reach these sections of The Wall.