A beautiful synthesis of Laos, Vietnamese, Chinese and French influences 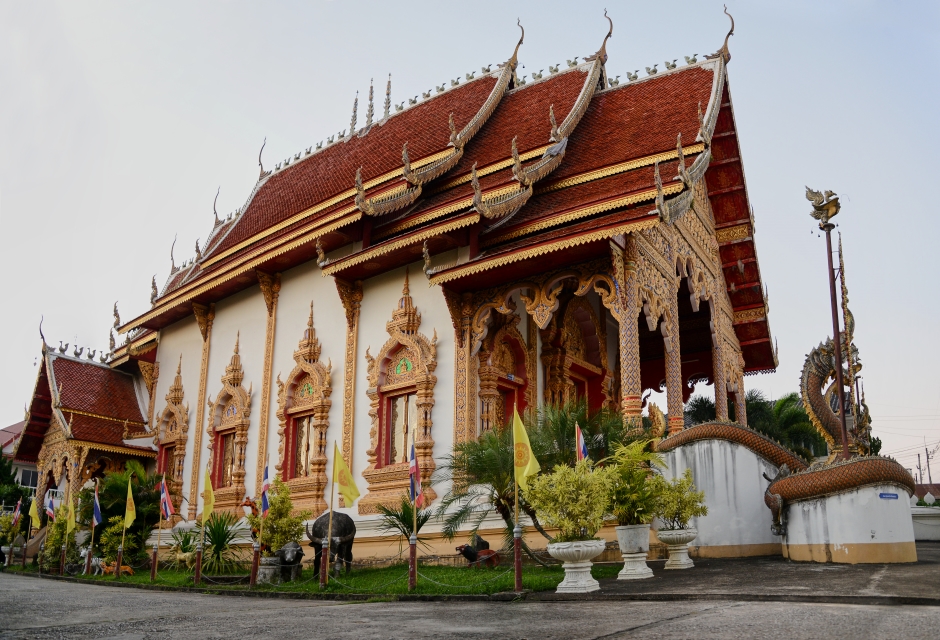 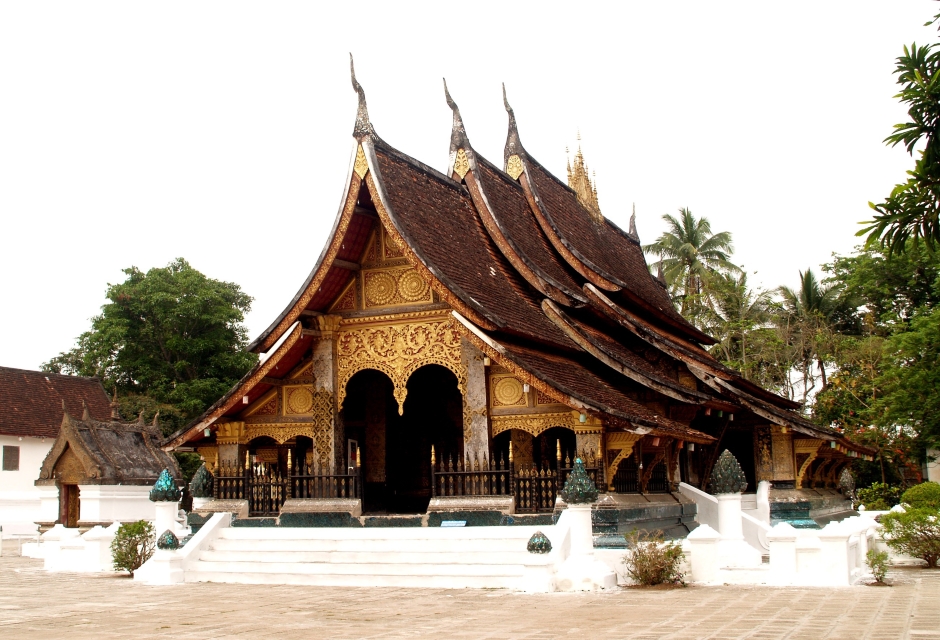 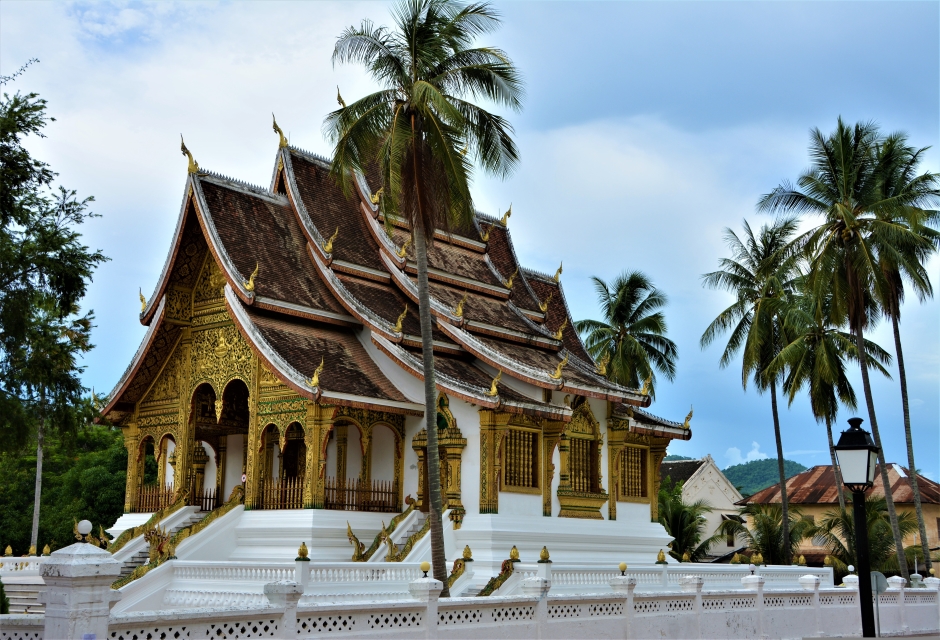 Introduction to Town of Luang Prabang

Luang Prabang is nestled at the center of the mountainous area of northern Laos amidst limestone hills wrapping around the entire area. There is a local legend that Buddha rested at the site of Luang Prabang and smiled, indicating that it was the future location of a powerful and wealthy city. Luang Prabang became the capital of the Kingdom of Laos and later was also a French colony. Even with the European influence, it has managed to retain a traditional Laotian presence. The wats, or temples, with golden roofs and elaborate decorations ubiquitous to the region are also prevalent throughout this city. Luang Prabang is also known for maintaining cleanliness and organization unlike many other cities in Southeast Asia. Laos did not experience modern urbanization until 1915-1925 which is evident in the city’s architecture. During this period of urbanization, much of the older styles were preserved instead of being replaced with modern buildings. Four different cultures have had great influence on the city of Luang Prabang: Laos, Vietnamese, Chinese and French.

The name Luang Prabang means “Royal Buddha Image” from the Dispelling Fear mudra, a ritual or symbolic hand gesture in Buddhism and Hinduism. Luang Prabang is situated in the northern region of Central Laos, approximately 425 kilometers north of the capital city at Vientiane. It is also the capital city of Louangphrabang Province.

The site of Luang Prabang is considered to be of historical as well as natural significance. Popular tourist sites include Kuang Si Falls, a 180 foot waterfall located 29 kilometers south of Luang Prabang. This waterfall has multiple levels, which can be accessed by hired truck or boat. It is possible to swim in the numerous natural pools at the different levels. For a less intense climb, there is the city’s main hill, Phou Si, offering a good vantage point to see the entire area, especialy at sunset and sunrise. The Pak Ou Caves, also known as the “Buddha Caves, are located 25 kilometers from Luang Prabang via a 1.5 hour boat ride. There is a cave at the entrance level as well as at the peak of the hill. Another natural attraction is the Bear Rescue Center on the way to the Kuang Si Waterfalls, home to Asiatic Black Bears. These bears are under threat of extinction due to poaching.

Among the sites of historical significance are the city’s temples. The oldest monastery in town is Wat Xieng Toung, situated at Luang Prabang peninsula’s northern tip. This temple is open from 6am-6pm. It can be accessed from the road snaking along the Mekong River.  This temple was built next to the Mekong river in 1560 by King Setthathirath. Fortunately, this temple was not harmed when the city was sacked in 1887.

Other historical sites include museums. One of the most famous is the Haw Kham Royal Palace Museum. This museum was constructed for the royal family of King Sisavang Vong at the time of French colonialism in 1904. Originally, the museum’s location was selected because of its convenient location near the river so that visitors could alight from the river and be received near the royal palace. The museum’s architecture is of the Laos and French Beaux Arts style. To see the ealier days of the royal palace, visitors can see Haw Kham. Occasionally dance or drama performances are staged at the nearby theater. It is usually closed for lunch from 11:30am to 1:30pm. A third museum is the Traditional Arts and Ethnology Centre. This small museum houses information concerning the Laotian ethnic cultures.

A famous night market is situated at the main street’s end, offering many souvenirs including traditional Laotian arts and handycrafts. This market shuts down at around 9pm. Bargaining is allowed.

Part of the local Buddhist tradition is the alms ceremonies that take place at dawn. Monks visit homes and businesses, accepting rice and other donated goods from villagers and tourists alike.

To learn how to make local fare, cooking classes are offered. There are day and evening classes teaching classes at venues such as Tamnak Lao Restaurant. The classes consist of shopping at a market and cooking 6 dishes for the day class and 3 for the evening class.

Upon the conquest of Luang Prabang by the Thai prince Khun Lo in 698 AD, its name was changed to Muang Sua. Khun Lo subsequently founded his dynasty of 15 monarchs who ruled this independant area for almost 100 years.

Nan-chao occupied Muang Sua in the early 8th century as a result of the frequent interference in the goings on of middle Mekong Valley principalities. These Nan-chao administrators or princes took the place of Thai rulers. During this time, the mighty Khmer empire had established an outpost at Xay Fong close to Vientiane. Upon the vacation of the Nan-chao rulers, a Xay Fong ruler, Chanthaphanit, peacefully moved into Muang Sua and took over in their stead.

The Khmers held power for a short time under Jayavarman VII in the late 12th century. However, they were dispelled in 1238 from the region due to an in-house uprising. Luang Prabang became the capital of the kingdom after the disintegration of Lan Xang in 1707. Even the French accepted Luang Prabang as the royal abode of Laos at the time of its annexation. Sisavong Vong, Luang Prabang’s king, was made the head of state of the Kingdom of Loas upon its independence from the French. The city remained the capital of the Kingdom of Laos up until the victory of the new communist regime in 1975.

Luang Prabang was inscribed a UNESCO World Heritage Site in 1995 during the 19th Session.

Luang Prabang has an international airport and also connects to Route 13 to Vang Vieng and Vientiane. Route 1 links with Muang Xay. There is also a link to Cambodia via Route 13.

Flights are offered daily to and from Bangkok, Chiang Mai, Vientiane, Siem Reap and Hanoi. By car take highway 13 from Vientiane and Vang Vieng. Buses run from Huay Xai, which at present is badly maintained, and lasting about 14-16 hours. Buses also depart from Vientiane on Route 13, which is a better paved road, lasting 9-11 hours. Visitors can also take the Mekong river. There are slow boats from Huay Xai taking 2 days and if traveling from Chiang Khong, there is a barge to ford the river to Luang Prabang.