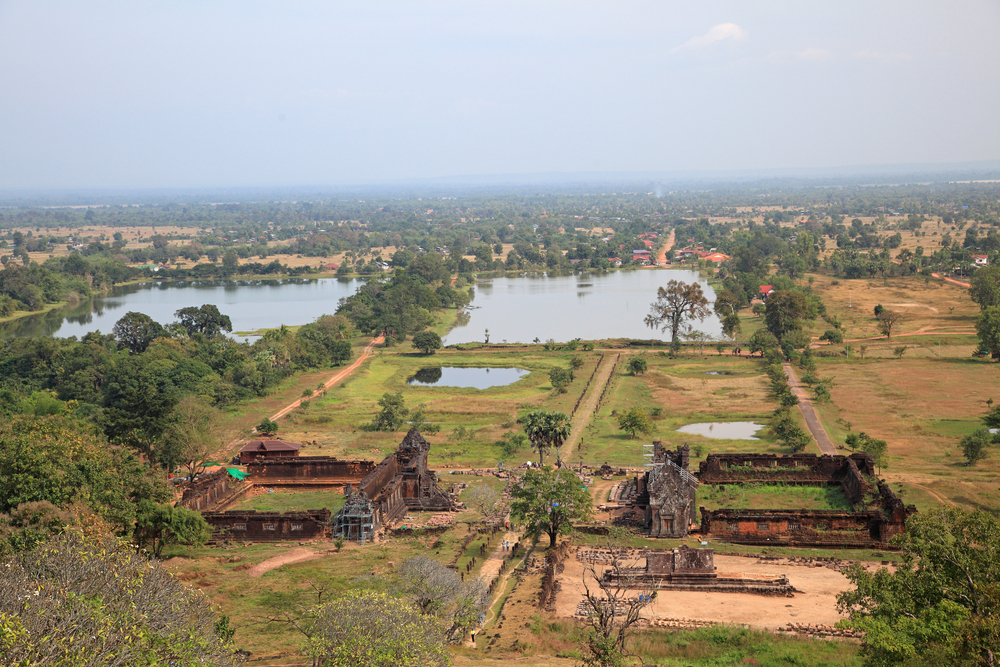 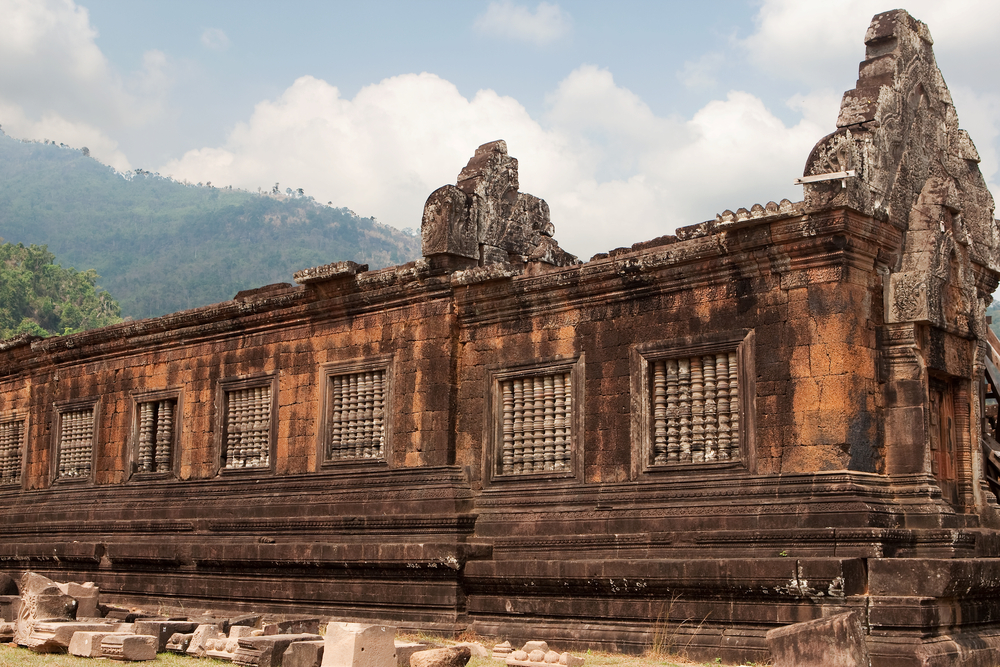 Introduction to Vat Phou and the Champasak Cultural Landscape

Vat Phou, also known as Wat Phou, literally means temple-mountain. This temple is of Khmer origins and located in the southern area of Laos at the bottom of mount Phu Kao. It is approximately 6 kilometers away from the Mekong River where it runs through Champasak province. The temple has a singular structure among other Khmer temples in that the elements head to a shrine where a linga, the symbol of the Hindu deity Shiva, was washed in the mountain spring water. Like many other temples in the area, Vat Phou transitioned from Hinduism to Theravada Buddhism, which continues to the present day.

Wat Phou is 1.4 kilometers in length from the origins of the spring and is situated 100 meters up a hill at the bottom of a cliff. The temples runs in along an east-west axis, similar to most other temples constructed under the Khmer Empire. A series of reservoirs, or barays, are encountered as one approaches the temple coming from the city. Unfortunately, little is left of the city. The 600 by 200 meter baray in the middle is the only reservoir containing water today. At the eastern end are the north and south palaces. Some consider one of these palaces to be the men’s palace and the other belonging to the women, but their real purpose is currently not known. Both possesses courtyards with entrances facing the temple axis. Each building’s courtyards is composed of walls of laterite, a substance containing iron and aluminum that results from concentrated weathering of the parent rock underneath. However, the southern palace’s corridor is made of sandstone. Currently, the remains of the northern palace is in better shape than the southern palace. Running between the two palaces is a causeway. Along this causeway to the left is the Nandin Temple building, or Shiva’s mount. However, the remains of this temple are minimal. Previously, there was a roadway linking Vat Phou to Angkor in present-day Cambodia beginning at this temple.

The causeway ends in steps which lead up to a terrace, and then another causeway followed by another terrace. Between these two terraces is a dvarapala. This statue became to be revered as the mythological constructor of the temple, king Kammatha. There were at one time six tiny shrines on the subsequent terrace; however, only remnants remain due to destruction by treasure-hunters. The third causeway ends in a third and much larger courtyard followed by sandstone steps up to the square courtyard containing the remains of the sanctuary and library structures. The sanctuary was constructed after the north and south palaces, in the late 1000s. Within the front part of the sanctuary are four modern images of the Buddha. At the brick section in the rear, there was once a linga. On the pediments of the three eastern doorways are depictions of Indra riding Airavata, Krishnaovercoming the naga Kaliya, and Vishnu atop Garuda. In addition, a horizontal beam is adorned with a representation of Krishna tearing apart Kamsa. A non-permanent covering has been put in place due to the absence of a roof.

Directly behind this courtyard is a cliff. Water ejects from this cliff to the southwest of the sanctuary edifice at a distance of approximately 60 meters. In earlier days, the spring coursed into the rear of the sanctuary to continually bathe the lingua via aqueducts of stone. Further images include a footprint of Buddha on the face of the cliff. Some of the rock boulders were sculpted to look like a crocodile and elephants. There is conjecture that the crocodile-shaped rock was actually used as a place for human sacrifices. The Chinese text from the 500s where the evidence for this is found has been buttressed by the fact that the proportions of the crocodile are similar to that of a human.

Each February, a celebration is held at the temple site by locals.

In the 400s, there was a temple on the site of Vat Phou but the only remaining buildings are from the 1000-1200s. In its early days, it was connected with Shrestapura city, which is located on the Mekong River’s banks straight east of mount Lingaparvata, otherwise known as Phu Kao. The first buildings were composed on the mountain during the late 400s when Shrestapura was the capital of an ancient kingdom linked with Chenla, an early Khmer Kingdom, and Champa, an India-influenced kingdom of Malayo-Polynesian origins. The mountain itself is considered to be the abode of Shiva, the Hindu deity, due to the linga shape at its peak. The nearby river is thought to symbolize the holy Ganges River in India. There is a spring that flows right behind Vat Phou and is revered as divinely blessed.

Vat Phou was one piece of the mighty Angkor-centered Khmer Empire from the time of Yashovarman I who ruled during the 900s. A new city took the place of Shrestapura to the south of Vat Phou during this Angkorian period. The temple that remains to this day was constructed in the 1000s at the time of the Koh Kher era, under Khmer kings Jayavarman IV and Hasavarman, and the Baphoun era, under Udayadityavarman II. During this time of re-building, many of the original stone blocks were used in the new construction. Upon its transition to Theravada Buddhism, only slight alterations were made. Eventually the site came under the jurisdiction of Laos, which continues to the present day. The boundary posts situated along the pathway have undergone restoration but not to a great extent to the temple itself.

Vat Phou was inscribed as a UNESCO World Heritage Site in 2001 at the 25th session.

The easiest and most comfortable way to get to Vat Phou is by cruise boat. Passage on these boats can be booked in the city of Pakse. Mekong Cruise is one company offering this service. The trip takes 3 days with stops along various sites on the Mekong River. The boat does not travel during the night. Food and lodging is available on the boat itself.