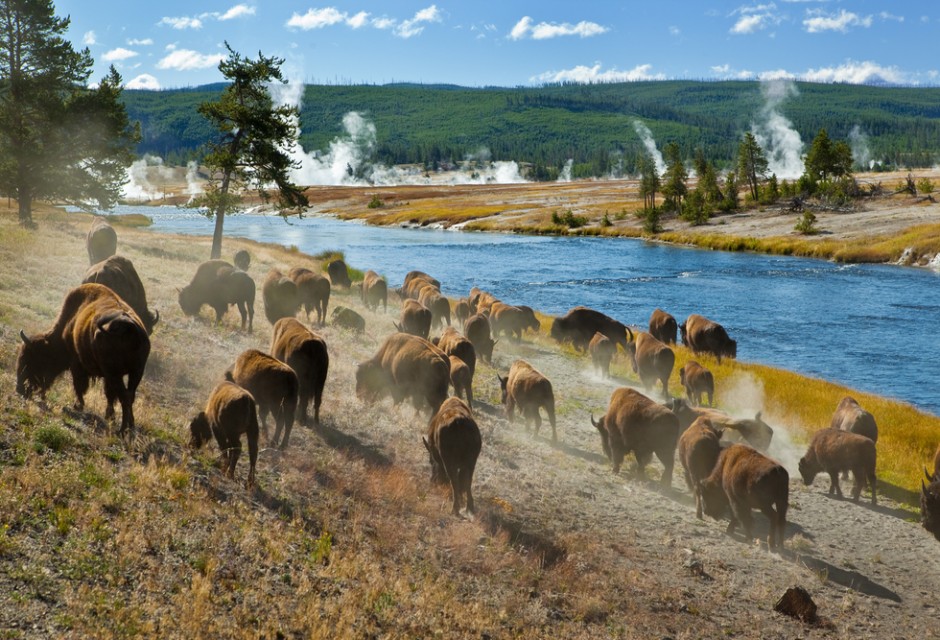 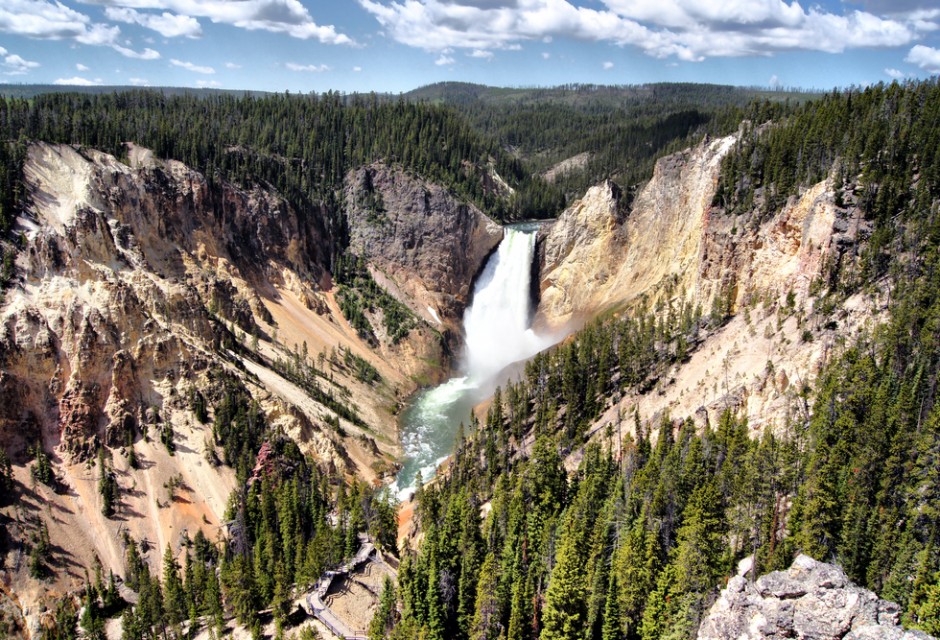 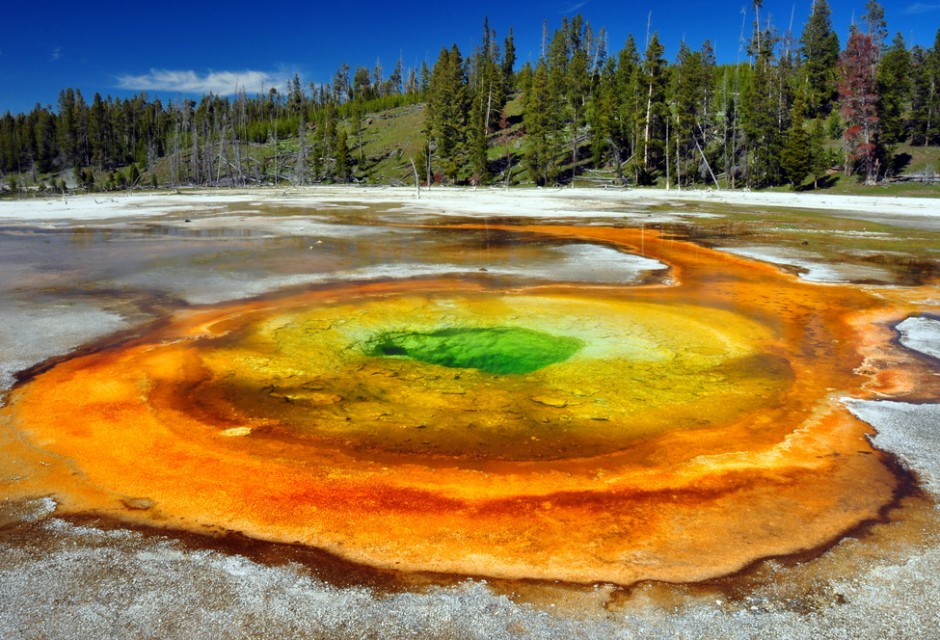 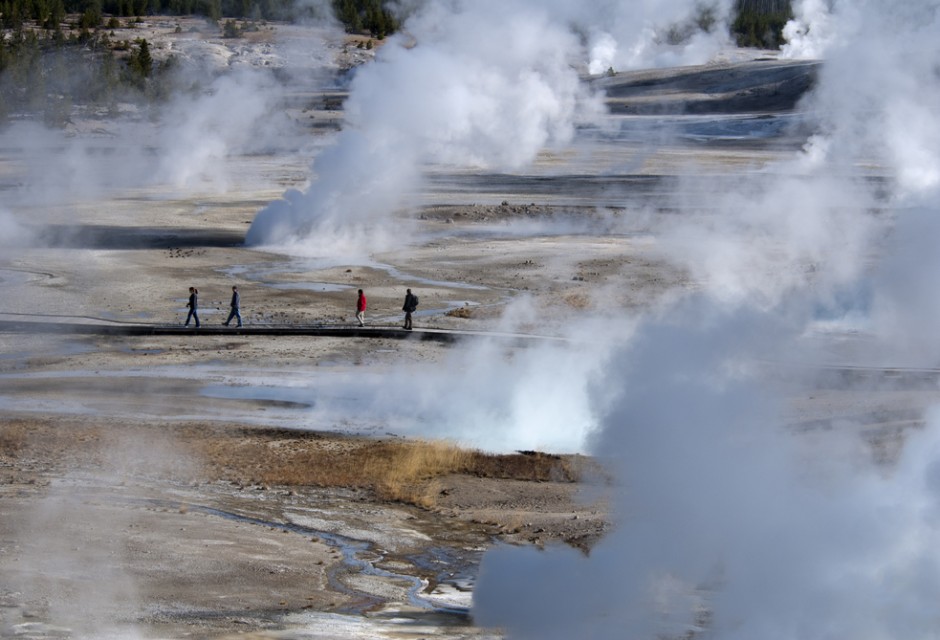 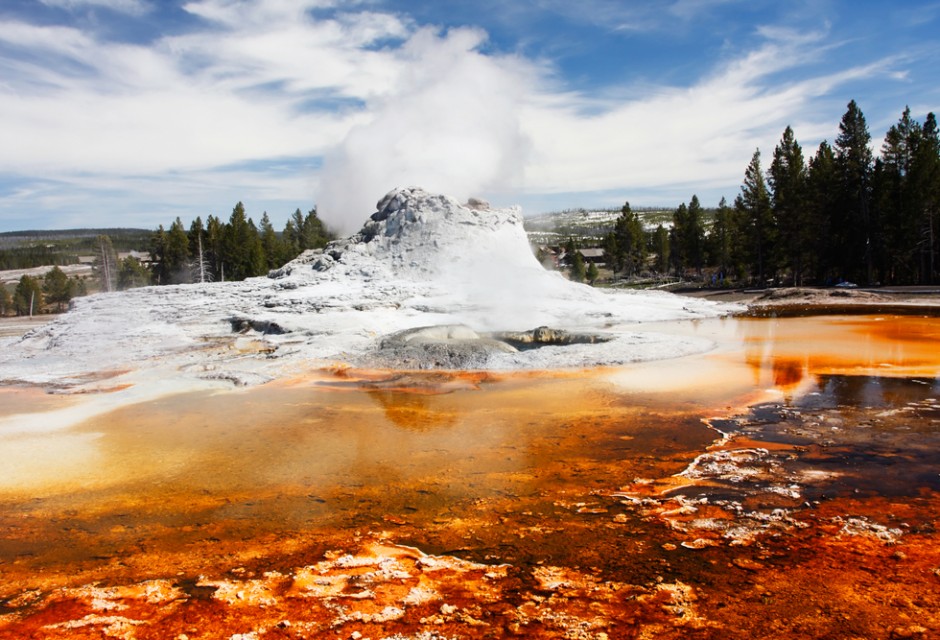 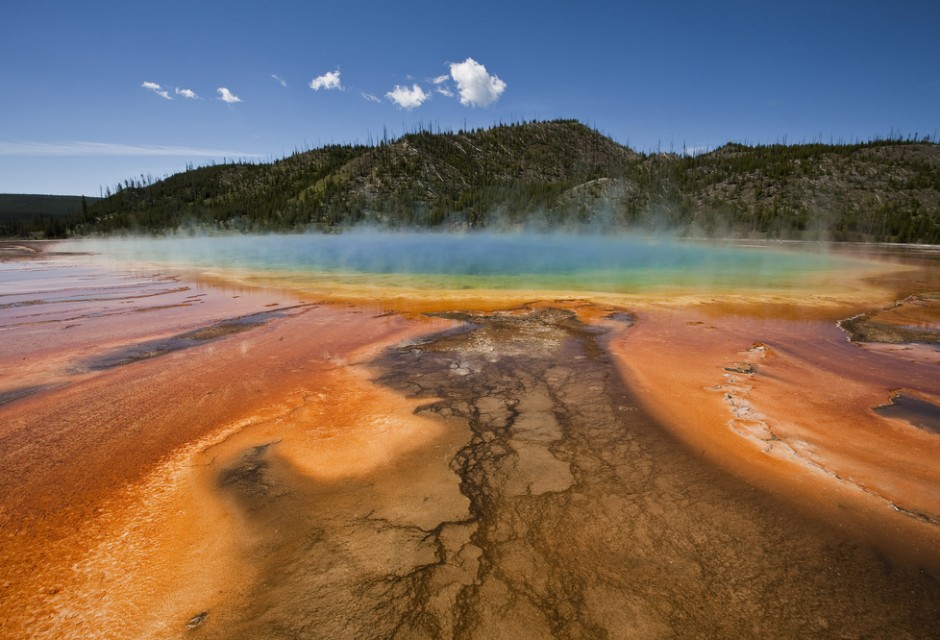 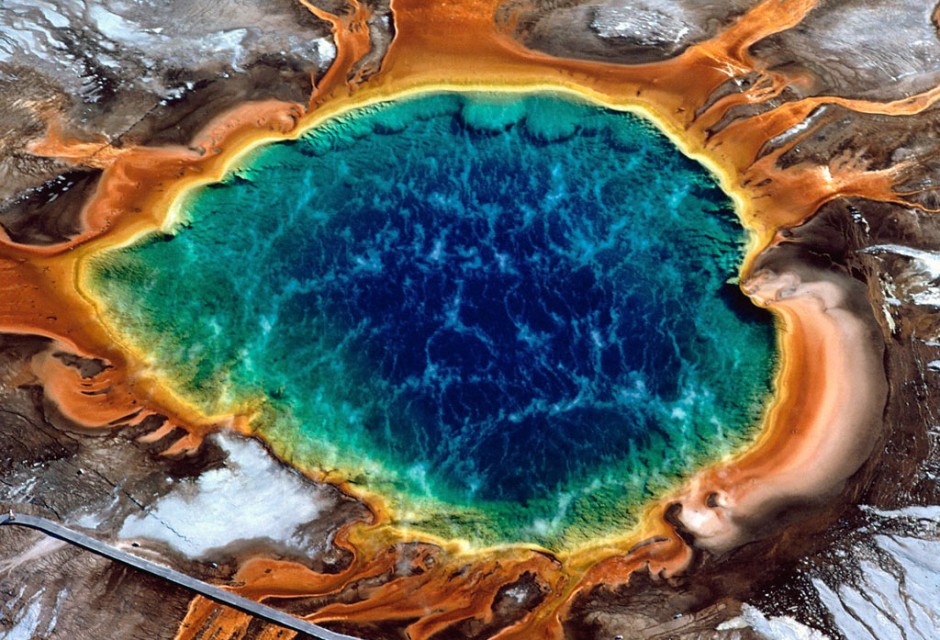 Located in western North America, Yellowstone National Park has an impressive array of natural features, including lava formations, waterfalls, and hot springs.  It is home to the world’s largest concentration of geysers, containing more than 300—this is about two thirds of all the geysers on the planet.  In addition, Yellowstone National Park encompasses a vast area of natural forests and is home to extensive wildlife such as grizzly bears, bison, wolves, and various rare and endangered species.

This protected park covers nearly 9,000 km2 and is located across three states; 96% of the park is in Wyoming, 3% is in Montana, and 1% is in Idaho.  It is one of the few large ecosystems that remains intact in the northern temperate zone of the earth.  All plant life in the park is allowed to naturally grow and thrive without any management by human hands.  Even naturally occurring forest fires, like those started from lightning strikes, are allowed to burn when possible so as not to interfere with natural processes.  Research in Yellowstone has resulted in a great understanding of ecosystem relationships.

In addition, Yellowstone is one of the most important sites in the world for studying and understanding the evolutionary history of our planet.  It contains nearly 150 species of plants in its fossil deposits, ranging from ferns to Sequoia trees.

Yellowstone offers something for everyone: from nature enthusiasts to bicyclists to those who simply want to spend some time outdoors with family.  Of course, the most popular tourist sites are many of the natural wonders located throughout the park.  There are quite literally dozens of natural wonders to be seen.  Some of the more well known natural attractions include: Old Faithful, Norris Geyser Basin, Gibbon Falls, and Yellowstone Lake.

Backpacking or hiking is a great way to take in the many natural wonders of the park.  Yellowstone has a campsite system in place, limiting the maximum number of people in a campsite and limiting the length of stay.  In order to hike or backpack overnight, travelers are required to obtain a permit within 48 hours of their trip.  These regulations help to preserve the park, as well as to provide travelers with an enjoyable experience.

Picnicking is also a popular way to spend time in the great outdoors of Yellowstone National Park.  There are 52 designated picnic sites throughout the park, with signs clearly pointing the way to each along the roadways.   Each site has picnic tables and bathroom facilities, so this is a great way to spend a casual day outdoors.

If you’d prefer to have a guide instead of branching off to explore the park on your own, there are also many programs with rangers to guide you through some highlights of the park.  These programs include everything from hikes through the park, to walks near some of the more prominent attractions, and even just informative discussions lead by the rangers.

Yellowstone also offers some unique experiences for younger visitors.  Children between the ages of 5 and 12 can participate in the Junior Ranger program, which is geared toward introducing children to Yellowstone’s natural wonders and educating them in how to preserve it for the future.  At the end of the program students are awarded a Yellowstone Junior Ranger patch.  Some activities include a ranger-led hike, as well as various activities on park concepts and resources.

The Yellowstone National Park was established in 1872 largely due to the efforts of Ferdinand V. Hayden.  Hayden promoted legislation to Congress that was aimed at protecting two million acres of land near Yellowstone River.  President Ulysses S. Grant signed the law on March 1, 1872 and, by doing so, created the world’s first national park.

However, because the concept of a national park was something entirely unprecedented, it became a great challenge for the United States to manage.  In response to this problem, a superintendant was chosen to oversee Yellowstone.  The largest obstacle for superintendants in these early years was preventing vandalism and poaching from occurring within the park.  This proved a difficult task because, by law, there was no way to punish these criminals. Then, in 1894, Congress passed the National Park Protection Act which, for the first time, made it possible to prosecute people who committed crimes against the park.

Up until 1916, the United States Army was in charge of maintaining Yellowstone National Park.   However, the National Park Service Act finally created a new agency to take charge of all national parks within the US, including Yellowstone.  Consequently, by 1918 the army had completely left Yellowstone and, instead, the first ranger force of 21 individuals took over the care of the park.

In 1883, tourism to Yellowstone began to increase significantly with the arrival of the Northern Pacific Railroad to the entrance of the park.  Tourism continued to rise as automobiles, an increasingly popular form of transportation, were allowed to enter the park in 1915.  Today, about 3 million travelers come from around the world to visit Yellowstone National Park.

If visitors are planning on flying to a location near Yellowstone National Park, they will want to fly into: Cody or Jackson in Wyoming, Bozeman or Billings in Montana, or Idaho Falls in Idaho.  Once arriving in any of these airports, bus service or other commercial transportation is typically available.  However, transportation is often seasonal, so it is important to check with specific carriers for schedules.  There are then five entrances to the park that can be accessed, depending on your location: the North Entrance, West Entrance, South Entrance, East Entrances, or the Northeast Entrance.